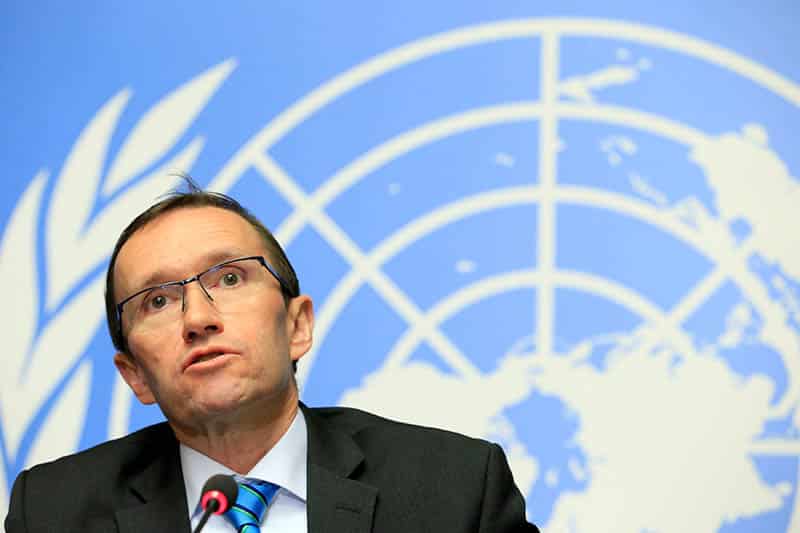 The envisioned ‘common document’ that he was mandated to produce as a guide to discussion on security and guarantees at the Conference on Cyprus in Crans-Montana, Switzerland, has been rejected by more than one party and will not be presented at the talks, UN adviser Espen Barth Eide said on Tuesday.

Speaking at a news conference in Geneva before flying to Crans-Montana ahead of tomorrow’s resumption of the international summit, in which the two sides in Cyprus, the country’s three guarantors — United Kingdom, Turkey, and Greece — and the European Union, will participate, Eide said the sides do not consider it a common document, and thus it has no status.

“Incidentally, let me make absolutely clear that despite claims to the contrary, the UN has made no proposals in the draft document, and any otherwise claims are false,” Eide said, visibly annoyed.

“Because we agreed with the sides that we wouldn’t do that.”

Greek Foreign Minister Nicos Kotzias tweeted on Tuesday afternoon that the UN withdrew the document in question after its one-sidedness was proven.

With regard to the format of the conference, Eide said it has no end date, although for practical purposes “planning is until July 7”.

“But whether we continue after that or not is a different issue,” he said.

Eide acknowledged that the sides’ starting positions are “diametrically opposed”, but said this is “not uncommon”.

“Reiterating one’s starting position at the start of the conference is to be expected,” he said.

“It is not uncommon and the UN has experience with this.”

From that point on, he continued, hard work will be required and there is no guarantee of success.

In the ensuing question and answer session, Eide said he preferred not to talk about the conference in terms of the “last chance” for a Cyprus settlement, but rather as the “best chance”, or a “unique opportunity”.

“There are definitely risks,” he said of the possible aftermath of failure.

“But the day before the conference I don’t want to focus on what happens if it fails.”

Although the two leaders, Eide said, have repeatedly declared that the status quo is unacceptable and must be changed, a relative sense that “life goes on” has creeped in because of stability and lack of violence, despite the troops gathered on the island.

“The problem is that there is not guarantee that the status quo is permanent,” he explained.

“There is no guarantee that things won’t happen, even if they haven’t happened yet.”

Eide confirmed that negotiation at Crans-Montana would take place in two separate “tables”, one dealing with the issue of security and guarantees, which involve the guarantor countries, and the other tackling bi-communal issues like governance and power-sharing.

“The processes will be separate but interdependent,” the UN envoy said.

Film proves a passport to another world