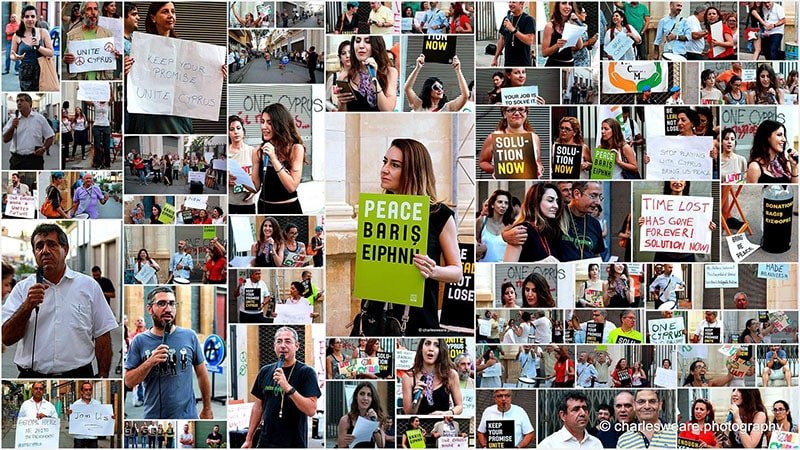 Ten members of the bicommunal Unite Cyprus Now movement will attend the peace talks starting on Wednesday in Crans-Montana to raise awareness about the importance of a solution in international media and encourage the leaders and guarantor powers to be constructive.

“Our actions will include a protest in all directions for international enlightenment about the isolation of Cypriot citizens who are excluded for half a century from the dialogue in the effort to find a solution, the zero measures taken to rebuild our society, the badly designed and presented solution plans, and the people of Cyprus being hostages to nationalism,” member of the group Andreas Lordos said on Tuesday from Switzerland.

Lordos also said they plan on asking both leaders why neither them nor a representative visited the protests that have been held almost daily for the last month. “The truth is they have no answer, it’s a disgrace,” he said.

“We believe that a united Cyprus will be stronger, safer and wealthier for all the communities living on the island. We refuse to hold our future hostage to our past. We know that the status quo is not sustainable and that its continuation will only lead to increased instability and tension,” the group said in a statement on Tuesday.

The ten members will be travelling to Geneva with the sponsorship of the Stelios Philanthropic Foundation, which has been supporting bi-communal projects and activities to promote lasting peace and was set up by Greek Cypriot philanthropist and easyjet founder Stelios Hadji-Ioannou.

Unite Cyprus Now has held demonstrations on week nights at 7pm and on Saturday morning for more than a month to show support for the ongoing talks and to ensure the leaders fulfill their promise to the people of Cyprus.

People of Unite Cyprus Now say change can only come from the bottom up, from the ordinary people, so they refuse to just sit back and wait for the leaders to solve everything. They know that for a solution to work the two communities must create strong bonds with each other and overcome the fear created over the past years.

Turkish-Cypriot member of the initiative Natalie Hami told the Cyprus Mail “there is a fear and a lack of trust between the two communities which does not come from the youth but from an older generation which passes on this fear to the younger generations”.

Apart from the trust issue, a major obstacle in the co-existence between the two communities is the education system, both in the north and in the south, which Unite Cyprus Now says promotes hatred and cultivates nationalism. Education should have started cultivating peace and reunification many years ago.

“Nobody prepared the communities. There are all the NGOs and civil society organisations that could be doing an even better job, but they’re not being used to their full capacity by their government. I want to believe that we will be able to live side by side but it’s impossible to do this when there are so many young Greek Cypriots who have never met a Turkish Cypriot. So, they have this hatred inside them for no reason,” Hami said.

On Tuesday night members of the group were to join a bicommunal music festival Unity Fest in the moat area of Ledra Palace that aims at bringing the youth of both sides together through music.

On Wednesday, while the two leaders meet in Switzerland, a bi-communal rally is planned at 7:30pm where people will march from the Nicosia municipality (meeting at 7pm) to the end of Ledra Street.
On Monday, a three-day photography exhibition opened at the Ledra Street/Lokmaci site of the protests in which five photographers from the two communities joined forces to produce photos of the buffer zone story.

“The green line that has kept us apart all these years is an open wound. Each one of us struck by this symbol of division and pain, has tried to approach it from a photographic point of view. It is a part of our homeland, yet inaccessible, dead, filled with memories and ghosts,” the group’s announcement said.

Our View: Time has come for president to put aside scheming