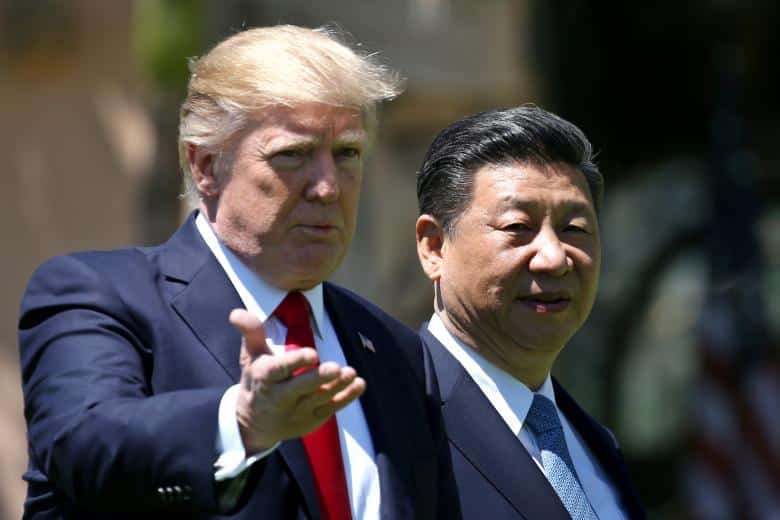 President Donald Trump and China's President Xi Jinping chat as they walk along the front patio of the Mar-a-Lago estate after a bilateral meeting in Palm Beach, Florida

The officials said Trump was looking at options including tariffs on steel imports, which Commerce Secretary Wilbur Ross already has said he is considering as part of a national security study of the US steel industry.

Whether Trump would take any steps against China remains unclear.

In April, he backed off from a threat to withdraw from NAFTA after he said Canadian and Mexican leaders telephoned him asking him to halt a planned executive order in favor of opening discussions.

The officials said there was no consensus on the way forward with China and they did not say what other options were being studied.

No decision was expected this week, a senior official said.

Chinese steel already is subject to dozens of anti-dumping and anti-subsidy orders. As a result it has only a small share of the US market.

“What’s guiding this is he ran to protect American industry and American workers,” one of the US officials said, referring to Trump‘s 2016 election promise to take a hard line on trade with China.

On North Korea, Trump “feels like he gave China a chance to make a difference” but has not seen enough results, the official said.

The United States has pressed China to exert more economic and diplomatic pressure on North Korea to help rein in its nuclear and missile programs. Beijing has repeatedly said its influence on North Korea is limited and that it is doing all it can.

“They did a little, not a lot,” the official said. “And if he’s not going to get what he needs on that, he needs to move ahead on his broader agenda on trade and on North Korea.”

US Ambassador to China Terry Branstad, who arrived in Beijing on Tuesday, spoke reporters outside his residence on Wednesday and said the United States hoped to collaborate with China.

The death of American university student Otto Warmbier last week, after his release from 17 months of imprisonment in Pyongyang, has further complicated Trump‘s approach to North Korea, his top national security challenge.

Trump signaled his disappointment with China‘s efforts in a tweet last week: “While I greatly appreciate the efforts of President Xi & China to help with North Korea, it has not worked out. At least I know China tried!”

Trump had made a grand gesture of his desire for warm ties with Chinese President Xi Jinping when he played host to Xi in April at his Mar-a-Lago retreat in Palm Beach, Florida.

“I think China will be stepping up,” Trump said at the time.

Since then, however, North Korea’s tests of long-range missiles have continued unabated and there have been reports it is preparing for another underground nuclear test.

China‘s inability to make headway on North Korea was one of the topics that was discussed, according to two people familiar with the meeting.

In a statement last week, China‘s foreign ministry said Yang had met McMaster and Kushner, but it gave no details.

Ministry spokesman Lu Kang did not directly answer a question about that meeting, but saidChina and the United States had discussed North Korea, among other issues, during a security dialogue Yang attended.

Yang also had a separate meeting with Trump. The ministry said last week that Yang toldTrump that China was willing to work with all sides, including the United States, to lessen tension on the Korean peninsula and promote an “appropriate” resolution.

Trump met Indian Prime Minister Narendra Modi on Monday at the White House and made a point of noting that the United States, India and Japan would be joining together in naval exercises soon in the Indian Ocean, a point that seemed aimed at India rival Beijing.

In final Trump-Biden showdown, less chaos but plenty of clashes