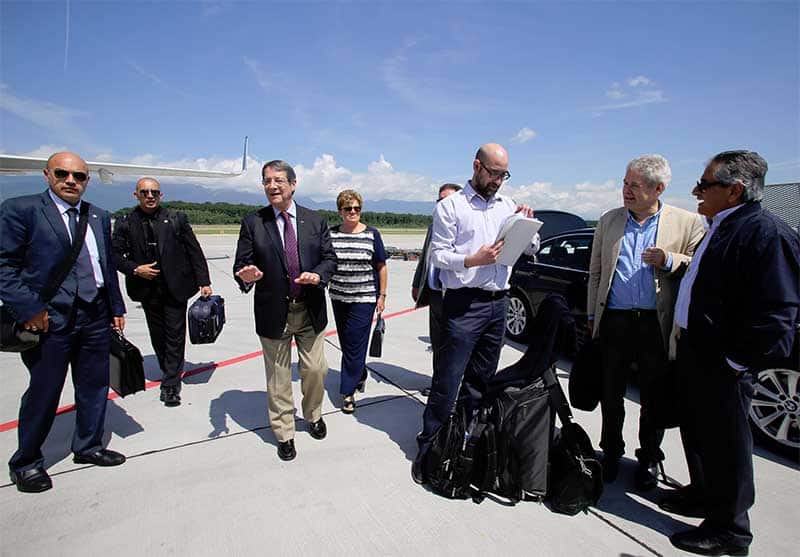 Anastasiades on his way to Crans-Montana on Tuesday

The Conference that will shape the future of Cyprus starts today with a big question mark over President Anastasiades’ readiness for it. His actions indicate confusion, uncertainty and indecision, but worst of all fear. Fear of the big challenge he faces in Crans-Montana where he will have to take personal responsibility for decisions that will define the future of his country. It is the type of pressure most people would not be able to cope with but which a true leader should take in his stride with conviction and resolve.

Anastasiades has displayed neither of these qualities in recent months, which have been marked by conflicting views and erratic behaviour. When the talks stopped he was urging Mustafa Akinci to return to the negotiating table but once they agreed on a resumption he started dragging his feet. He set conditions for attending a conference but dropped them after a meeting in New York with the UN Secretary-General although there would be a ‘common document’ outlining the procedure that would be followed in Switzerland.

If there was no ‘common document’, the president would not go to the conference, said deputy government spokesman a few days after the meeting. Anastasiades flew off to Switzerland with his negotiating team on Tuesday morning despite having refused on Monday to accept the draft document submitted by Espen Barth Eide last week as binding, because it “ignores essential issues for the Greek Cypriot community.” There was no agreed common document, declared the government spokesman on Monday, illustrating the president’s state of confusion. When the negotiator Andreas Mavroyiannis briefed the party leaders about the document last Wednesday, he had said it was satisfactory, only for Anastasiades to declare it unacceptable a few hours later.

On Tuesday Eide officially laid to rest the common document, but said the conference would still start with negotiations of security and guarantees, raising questions as to why such a fuss had been made about it by Anastasiades. Aware that his behaviour would raise questions, Anastasiades insisted his positions “do not exude negativity,” even though it was difficult to believe him. His positions certainly did not convey a positive or constructive outlook, despite assurances that he was going to Switzerland, “with the sole aim and intention of reaching a comprehensive solution of the Cyprus problem.”

We hope this is the president’s intention and he would prove all the sceptics, who suggest he is looking for an exit strategy rather than a deal in Crans-Montana, wrong. Reaching a compromise that is certain to spark vehement opposition, no matter how good, is a big ask, but Anastasiades should also consider that failing to do so would signal the end of the settlement efforts and the UN declaring the Cyprus problem unsolvable.

The time has come for the president to clear his mind, put aside the scheming and publicity games and give his best shot at securing a good deal that would ensure a future of stability, peace and prosperity for the country.

A solution: if not now then when?