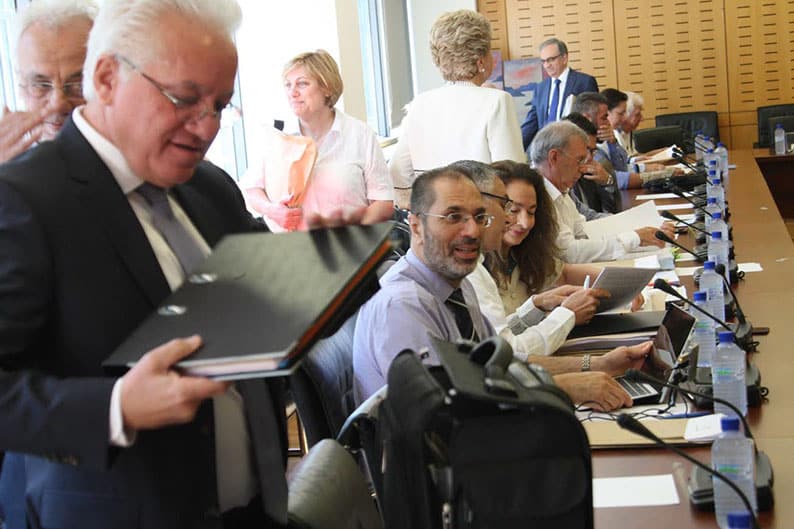 Auditor-general Odysseas MIchaelides (seated) at the House on Thursday

Not only is the government not making sound financial use of state land in industrial areas, but it frequently allows private entities to profiteer from easements, the Audit Office has said.

In a report released earlier this week, the government watchdog highlighted the use of land in the Aradippou industrial zone, in particular the subletting to Halliburton Mediterranean Ltd of real estate where the company obtained offices, a laboratory and facilities for the maintenance of equipment used in offshore drilling.

Originally the land in question – plots 36 to 39 – was leased by the government to a private company, S.Ch.Jeropoulos Maritime Co Ltd, in December 2008.

The agreement was for a nominal rent of €1.71 per year for the first five years, as this was under an incentives scheme for commercial development. Thereafter, the annual rent would be €12,413, 08.

Subsequently, the lessee, Jeropoulos Ltd, did not develop the property; it repeatedly asked the ministry of industry to grant it postponements to develop, citing the poor economic climate amid the financial crisis.

The latest postponement granted was effective until the end of 2015 – meaning that for seven years no activity took place on the land in question.

In September 2014, Jeropoulos Ltd requested that its rights in rem in immovable property be transferred to another company called Logistico Park Ltd, in which Jeropoulos Ltd had a 50 per cent stake.

Jeropoulos also informed the ministry at the time that Logistico planned to sublet the land to Halliburton Mediterranean Ltd.

On April 10, 2014, Halliburton informed the energy and industry minister that it was close to agreeing to sublet the space, some 5,000 square meters, from the new lessee, Logistico.

Around May 10 of the same year, Halliburton officials met with president Nikos Anastasiades to brief him on their plans to set up an operations base in Aradippou.

But the actual agreement transferring the lease to Logistico was signed later, on May 22.

“It’s as if the companies knew in advance they would get government permission for the transfer of the leasing rights,” a source familiar with the matter told the Cyprus Mail.

Halliburton Mediterranean Ltd was incorporated on May 10, 2013.

Complications arose because Halliburton’s premises were located in an area designated only for light industrial activity, whereas the company’s operations consisted of heavy industry.

This required a special exemption, which was granted by the cabinet – which has the authority to bypass a district’s master plan if it is deemed to be in the public interest.

Amid appeals from Halliburton that it needed its facilities to be up and running by August 2014, the exemption was granted in record time, despite the close proximity of the premises to inhabited areas and concerns over noise pollution.

Meanwhile, on July 28, 2014, Logistico requested government approval so that another company, Medkoi Ltd, could transfer its lease rights on three other plots adjacent to it.

Once approval was granted by the ministry, Logistico also subleased these plots to Halliburton.

Citing this and one other case in Aradippou, the Audit Office said: “It is our opinion that these two cases are the latest examples of the ministry’s long-running failure to make appropriate use of state property in industrial areas, given that this land should be granted for the purpose of boosting industrial activity, but instead, certain entities are renting this land at a low rate and, acting as realtors, profiteering at the expense of the public.”

In previous reports, the auditor-general has zeroed in on the leasing of state land to private corporations, who then sub-lease the property to others at rates several times higher than the rent they pay the government.

What’s more, the land is often subleased by private lessees to government departments.

The Audit Office’s report for 2015 cites several such instances relating to industrial zones.

The most blatant example concerned the Strovolos industrial zone, where the company leasing the land from the state paid €6,660 in rent per year, while sub-letting the land to the pharmaceutical services for €135,000.

Waiting for a push from Guterres