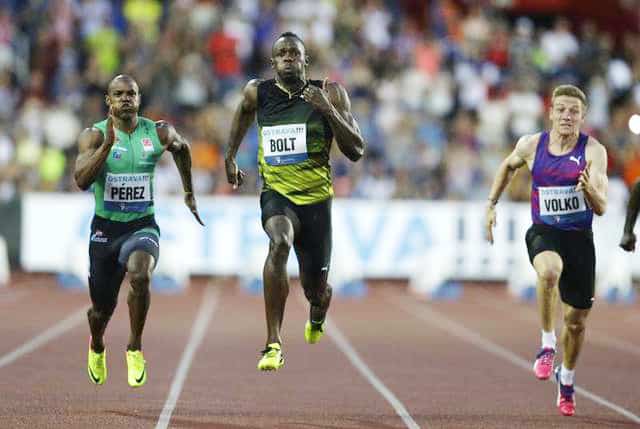 Usain Bolt, who will retire after August’s world championships, said he was not happy about clocking over 10 seconds for the second straight race, although he remained confident about the remainder of the season

Usain Bolt overcame a slow start to win the 100 metres at the Ostrava Golden Spike meeting on Wednesday as he gears up for a final world championships in London this summer.

In his second 100m outing of his final season, the Jamaican was slow out of the blocks but jumped ahead before the halfway point to finish in a time of 10.06 seconds, just edging Yunier Perez of Cuba, who ran a personal best 10.09 seconds.

The 30-year-old said he was not happy about clocking over 10 seconds for the second straight race, although he remained confident about the remainder of the season.

“I am not happy with the time but I am just getting to my running,” he told the sellout crowd after his ninth and final appearance at the meet in the eastern Czech industrial city.

“I have some training to do… But I will be fine.”

Bolt has become a regular at the Ostrava meet and his fans showed their appreciation at the end of the night, holding up placards to form the Jamaican flag as Tina Turner’s “Simply the Best” played in the stadium.

“The biggest thing is always the crowd… That is why I keep coming back here. You guys are wonderful. Thanks for everything,” Bolt said.

He later told reporters his focus was on staying healthy, including taking care of his back as he gets older. “But I did not get injured, that is key,” he was quoted as saying by Czech news website idnes.cz.

With Bolt moving closer to retirement, a number of athletes could be set to emerge from his shadow.

Among them is South African Wayde van Niekerk, who broke the 300m world record earlier in the evening, rubbing Michael Johnson out of the record books for the second time in less than a year.

“I have been improving in each and every one of my events so it is a great step for the year and I am feeling quite confident for the rest of the year,” the sprinter, who is expected to run the 200m and 400m at the world championships, told Czech Television.

“I was ready to dig deep and just get used to the feeling of the longer events. I am pleased with today.”

July will be camera, lights and lots of action