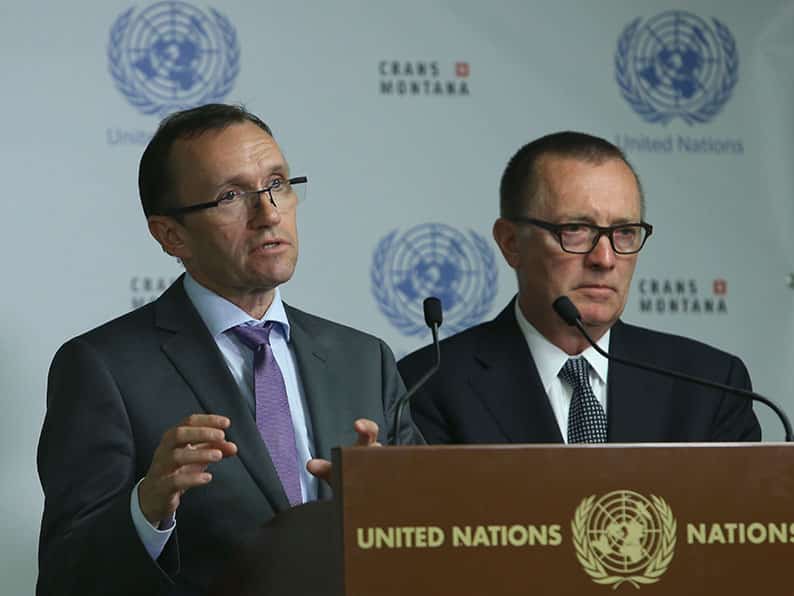 President Nicos Anastasideas said on Wednesday night that a Turkish proposal on security and guarantees did not satisfy the Greek Cypriot side.

Speaking during his departure from the conference at the end of day one, the president said United Nations Under-Secretary-General for Political Affairs Jeffrey David Feltman had tabled three questions “that we will answer tomorrow”.

“They relate to alternative proposals on guarantees,” he said. “Regarding the Turkish proposal, what I have to say is that it does not satisfy us at all.”

Earlier, it had been reported that Turkey had tabled a four-point proposal but no details were given. Reports said later that Ankara was prepared to withdraw a large number of troops and reduce them further within an agreed timeframe.

It did not however agree to the abolition of the Treaty of Guarantee.

Turkish Foreign Minister Mevlut Cavusoglu said it was a good meeting. He signalled that he was prepared to stay in Crans-Montana until July 7.

His Greek counterpart Nicos Kotzias also appeared prepared to stay in Geneva. He told demonstrators outside the conference hall that a small step was made on Wednesday.

“We consider that a significant step has been made, that everyone admits and accepts that the issue of the guarantees and security of Cyprus is a fundamental issue of the Cyprus question,” he said.

The conference resumes on Thursday with the same agenda. It is expected to start at 10am Cyprus time and last two hours.

After that, the two leaders are scheduled to meet to discuss other matters.

UN Special Adviser Espen Barth Eide said it was a very constructive and good first daywhich had gone “beyond what we expected”. He said new ideas and proposals were heard from all sides.

The UN was forced to issue a clarification before the afternoon session when Eide said at a news conference after the morning session ended, that a draft ‘common document’ he had submitted as a starting point had not been withdrawn.

Neither side, but more so the Greek Cypriot side, were happy with its content and it was said to have been withdrawn.

“It’s just not ‘common’,” Eide said.  “We’re just not using it as a common platform.” He said it was not as if the document was invented by the UN, and that its contents had come from the input of the players.

This prompted the reaction of the Greek Cypriot side, forcing the UN to issue a clarification.

“The Special Adviser has clarified that the document was not a common document and therefore was not and will not be tabled at the Conference on Cyprus. However, the positions that were captured in the document from Mont Pelerin III in January and the ideas that had informed the drafting of the document in consultation with all parties, remained available to inform the positions of the sides,” UN spokesman Aleem Siddique said.

During the morning session, interventions were heard from both sides, and the three guarantor powers, Greece, Turkey through their foreign ministers Kotzias – who presented a proposal for the abolition of the guarantee system – and Cavusoglu respectively, while the British delegation was led by Jonathan Allan.

Siddique said: “The UK remains represented at the conference and we expect ministerial representation at some point in the proceedings.”

Johnson tweeted later: “Have been in Switzerland for #ConferenceOnCyprus. With flexibility & creativity, we have a real chance for a settlement. UK ready to support”.

British Minister for European Affairs Sir Alan Duncan who was also in Switzerland and left with Johnson, is due to return to Crans-Montana on Friday, and is prepared to stay until the end of the conference. Johnson might also return to Switzerland, depending on developments.

Eide, who held his news conference jointly with Under Secretary-General Feltman, said the plan is for the conference to go on until July 7 with everyone prepared to stay “for the long haul”.

He said a deal would be ‘hard’ but not impossible and said Crans-Montana was now “the best chance” for a solution. “We had a good beginning, beyond what we expected,” he said. “After this morning’s session, I feel even better this is the best chance for agreement.”

He said he preferred to use the term “best chance”, rather than the “last chance”.

Eide said an agreement was not beyond reach, adding that in the event a comprehensive settlement was not reached in Switzerland, that at least if there was a breakthrough in Crans-Montana, there were some things that could be wrapped up in Cyprus. “It’s not impossible. It could happen,” he said. “But if we don’t have either of those, then we can’t talk about success in Crans-Montana.”

Feltman, who said UN Secretary-General Antonio Guterres would go to Crans-Montana on Friday, said there was a sense “that whatever the disagreements are over history, now is the time to come together”. He said the message from the secretary-general was that the parties should seize the opportunity. “What we heard this morning gave us the hope and the conviction that the leaders and the three guarantors have come to this conference with the determination to overcome the challenges and resolve the issues,” he said.

The process is to follow two tracks. A ‘Table 1’ for all participants and a ‘Table 2’ on bicommunal issues that are still pending, Eide said but nothing would be agreed until everything was agreed, and all issues were open. The two-track system would be constantly active and remain open for bilateral meetings and private meetings.

“It’s a way to deal with everything,” said Eide. “Hard work will be needed. At the end of the day it will be the responsibility of the participants to go that final mile to think outside of the box, to try out some new ideas so we can go down from this beautiful Swiss mountain with a plan.”

If there is a deal, Eide was non-committal on when a referendum might be held.

Feltman said the two leaders had taken the process farther than their predecessors ever had and said the convergences had been “remarkable”.

“That’s not to underestimate the difficulties that still have to be overcome,” he said. “But what I found reassuring this morning was the positive atmosphere…there was a sense that whatever disagreements there might be… that now is the time to come to an agreement on the future of Cyprus.” This was the message Guterres wanted him to deliver, he added.

Second day of Crans-Montana talks kicks off, focus on security

Hope for Children helplines for children