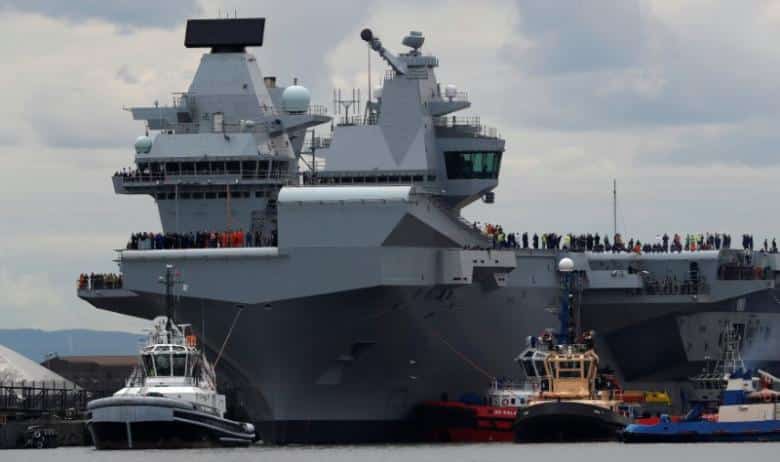 The British aircraft carrier HMS Queen Elizabeth is pulled from its berth by tugs before its maiden voyage, in Rosyth, Scotland, Britain June 26, 2017

The Russian military mocked Britain’s new aircraft carrier on Thursday, saying the HMS Queen Elizabeth presented “a large convenient target” and would be wise to keep its distance from Moscow’s warships.

The giant vessel, Britain’s most advanced and biggest warship, embarked on its maiden voyage on Monday, prompting British Defence Secretary Michael Fallon to say he thought the Russians would look at it “with a little bit of envy.”

The ageing Admiral Kuznetsov, Russia‘s only aircraft carrier, and a ship that Fallon has criticised more than once, was by contrast armed with an array of defensive missiles, the ministry said, warning the HMS Queen Elizabeth to keep her distance from the Russian navy.

“It is in the interests of the British Royal Navy not to show off the ‘beauty’ of its aircraft carrier on the high seas any closer than a few hundred miles from its Russian ‘distant relative’,” the ministry said.

Fallon offended Russia‘s military in January when he dubbed Moscow’s sole aircraft carrier “a ship of shame” as it passed through waters close to the English coast on its way back from bombing raids in Syria.

Russia said at the time that Britain was staging a show by escorting the ship, the Admiral Kuznetsov, through the English Channel designed to distract attention away from the shortcomings of the British navy.

The Kuznetsov, which entered service in 1991 in the Soviet Union’s dying days, is part ofRussia‘s Northern Fleet near Murmansk and is currently awaiting serious repairs.

Russia, striving to promote a more assertive foreign policy amid chilly ties with the West, is in the process of re-arming its army and the navy.

But some experts at home and abroad say the Cold war-era Kuznetsov is now obsolete and thatRussia needs a new generation of aircraft carriers.

May faces vote test in parliament over government plan