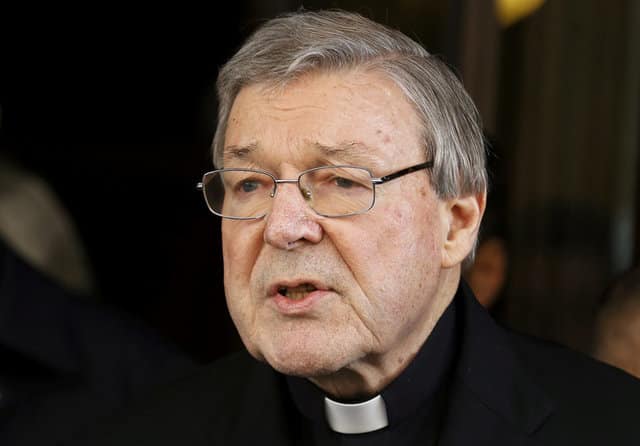 A top adviser to Pope Francis was charged with multiple historical sex crimes in his native Australia on Thursday, bringing a worldwide abuse scandal to the heart of the Vatican.

Appointed Vatican economy minister by Francis, Cardinal George Pell is the highest-ranking Church official to face such accusations. He asserted his innocence and said the pontiff had given him leave of absence to return to Australia to defend himself.

“I am looking forward finally to having my day in court. I repeat that I am innocent of these charges. They are false,” the 76-year-old told a news conference at the Vatican. “The whole idea of sexual abuse is abhorrent to me.”

Pell’s high-profile departure, even if temporary, puts pressure on a pontiff who has made compassion for the vulnerable his watchword, and has declared zero tolerance for a child abuse scandal that has beset the Church for decades, but has struggled to overcome resistance in the Church hierarchy and clergy.

Pell was one of those whom Francis hand-picked to sit on a panel of nine cardinal-advisors to give a greater voice to the Church’s global flock, and the new broom he chose to reform theVatican‘s opaque finances.

But Pell, a former archbishop of Melbourne and Sydney, had come under pressure from an Australian government commission on institutional child abuse, and had himself been under investigation for at least a year.

On Thursday, police in the Australian state of Victoria, where Pell was a country priest in the 1970s, said he faced “multiple charges in respect of historic sexual offences” from multiple complainants.

They did not detail the charges or specify the ages of the alleged victims or the period when the crimes were alleged to have occurred. He was ordered to appear before Melbourne Magistrates’ Court on July 18.

Pell, who declined to take questions, decried a “relentless character assassination” by the media and said he wanted to “clear my name and then return to my work in Rome”.

Vatican spokesman Greg Burke said Pell would not appear in public Church services for the time being.

Pell told the Australian inquiry last year that the Church had made “catastrophic” choices by refusing to believe abused children, shuffling abusive priests from parish to parish, and relying too heavily on the counsel of priests to solve the problem.

But he angered victims by saying he was too ill to fly home, testifying instead from Rome.

He indicated on Thursday that he would now go to Australia: “I have spoken to my lawyers about when I need to return home and to my doctors about how best to do this.”

But the indictment of such a close adviser raised questions about Francis’s choice of personnel and his ability finally to root out the sexual abuse that had been tolerated or ignored in the Church for decades, and act against those who covered it up.

Marie Collins, the top non-clerical member of the commission on abuse that Francis established in 2014, and its last remaining victim of priestly abuse, quit in frustration in March, citing a “shameful” lack of cooperation within the Vatican.

She said the Vatican administration had even ignored a specific request from the pope that all correspondence from abuse victims should receive a response.

“The long, aching scandal that stained the previous two popes – Vatican passivity to clergy abuse cases – is the swamp Pope Francis faces,” said Jason Berry, author of ‘Lead Us Not Into Temptation’, a book about sexual abuse in the Church.

“Unless the pope engineers systemic change, the crisis will get worse,” Berry told Reuters.

Francis was impressed by Pell when they met in 2013. In meetings among cardinals before the conclave that elected Francis pope that year, the former Australian Rules football player stood out not only for his height and broad shoulders but also for his command of financial matters.

After becoming pope, Francis, hoping to put an end to Vatican financial scandals, moved Pell to Rome to head a new ministry, the Secretariat for the Economy.

After initially giving Pell sweeping powers, the pontiff later clipped his wings when other departments accused him of an overbearing manner and of being condescending to the Italian-dominated Curia, the Church’s central administration.

Church sexual abuse broke into the open in 2002, when it was discovered that US bishops in the Boston area had simply moved abusers to new posts instead of defrocking them.

Thousands of cases have come to light around the world as investigations have encouraged long-silent victims to go public, shattering the Church’s reputation in places such as Ireland, and more than $2bn has been paid in compensation.

Under previous popes, the Vatican, a sovereign state in the middle of Rome, sheltered officials wanted by other countries.

In the early 1980s, the Vatican refused an Italian request to hand over Archbishop Paul Marcinkus – an American who was then head of the Vatican bank and was wanted for questioning about the fraudulent bankruptcy of a private Italian bank.

Cardinal Bernard Law of Boston moved to Rome after a sexual abuse scandal erupted in his diocese, and has been living in the Italian capital for more than 15 years.

Victims’ groups were outraged when Law, now 85 and retired, was given a plum job as chief priest at a Rome basilica by the late Pope John Paul II.

However, Francis was tough in the case of Jozef Wesolowski, a former archbishop who was accused of paying for sex with minors while serving as papal ambassador in the Dominican Republic.

Wesolowski was recalled in 2013, defrocked and arrested in the Vatican in 2014, but died shortly before his trial was due to start in 2015.

Hellenic strike to go ahead