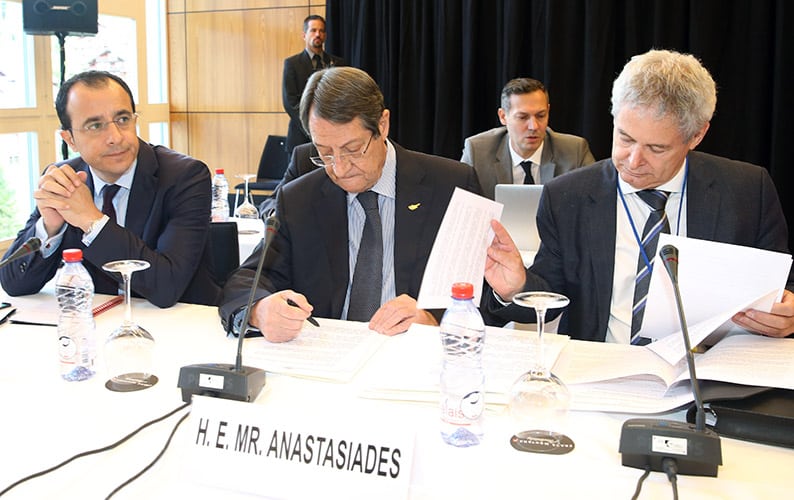 ON THE second day of the Cyprus conference on Thursday, Turkey sought to gain a tactical advantage with its foreign minister Mevlut Cavusoglu telegraphing to the Greek Cypriots they should forget about the scrapping of foreign guarantees or full withdrawal of Turkish troops from the island post-settlement.

“Greece and the Greek Cypriot side expect no troops and no guarantees. This is a dream they should awake from,” Cavusoglu told the Turkish press on the sidelines of the ongoing conference in Crans-Montana, Switzerland.

The aggressive remarks came a day before UN Secretary-General Antonio Guterres is set to join the conference, sparking speculation that Ankara’s top diplomat aimed to force a ‘mini crisis’ ahead of the UN chief’s arrival and to position the process on a different track.

Cavusoglu described the ongoing round of Cyprus negotiations as a “final” series of talks, according to Anadolu news agency.

“This conference on Cyprus is the final one and there should be a conclusion at this round in Crans-Montana,” he added, calling on the Greek Cypriot leadership to bring “acceptable proposals” to the table.

Greek media claims about an alleged plan to cut Turkish troop numbers in Cyprus by 80 per cent were dismissed by Ankara earlier on Thursday, Anadolu said.

Government spokesman Nicos Christodoulides demurred when asked to respond to Cavusoglu’s remarks, except to say that, given the talks are delicately poised, the parties involved should avoid airing such views.

During a press briefing in New York, Stéphane Dujarric, spokesman for the UN Secretary-General, confirmed that Guterres was en route to Switzerland as scheduled.

He declined to say how long the UN chief would remain at Crans-Montana.

But UN Secretariat sources told the Cyprus News Agency that Guterres would spend at least two days there.

Earlier in the day, a report in The Guardian suggested that “privately, the UK has been pressuring Turkey to accept full troop withdrawal”, to be replaced by a multilateral force, either EU- or UN-run, as guarantor.

“Ankara has suggested it will propose reducing troop numbers by 80 per cent at the conference but has called a full withdrawal ‘unrealistic’,” the Guardian wrote, citing a well-briefed source as saying “it’s going to require patience.”

The conference in the Swiss resort is taking place on two tracks, or tables: internal issues are being negotiated by the Greek Cypriots and Turkish Cypriots, while taking part in the talks on the external aspect are the two sides in Cyprus as well as Turkey, Greece and the UK.

It is widely acknowledged, however, that a breakthrough on security and guarantees is what will make or break this latest attempt at hammering out a Cyprus deal.

Reporting from Crans-Montana, the CyBC’s correspondent cited Turkish-Cypriot sources close to the talks as saying their side was ‘not averse’ to considering the multinational force allegedly proposed by the UK, provided that the force included Turkish troops as well.

The day’s work began at around 10.30am Cyprus time with negotiations between the Greek Cypriot and Turkish Cypriot teams, discussing a range of issues.

Later, Eide requested an unscheduled meeting with Anastasiades and Akinci, which delayed the wider conference by an hour and a half.

Christodoulides said that meeting was held because the UN official sought to take stock of developments up to that point.

But reports said problems arose during the day due to the issue of the four freedoms relating to the status of Turkish nationals in Cyprus after a settlement.

The evening conference – security and guarantees – got underway shortly after 8.30pm, concluding at around 10.30pm.

On the way out, Anastasiades said there was no crisis but there had been some ‘complications’ over the four freedoms.

Goretzka quick off mark to fire Germany into final