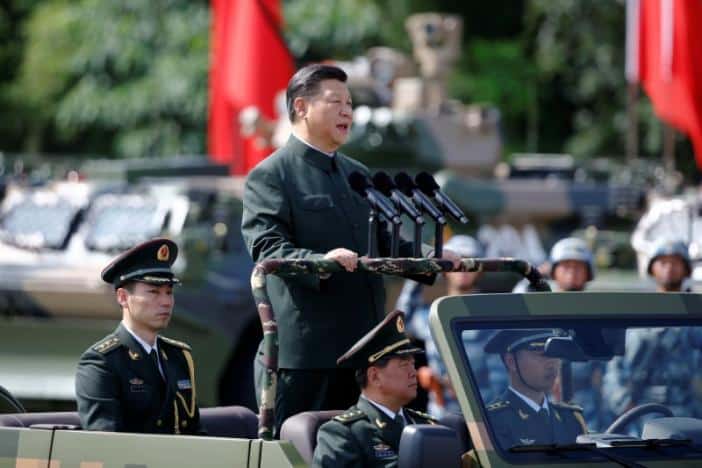 Xi’s visit comes amid heightened tension between China and the former British colony, where many are concerned at increasing interference by Beijing in the city’s affairs, despite the promise of wide-ranging autonomy under the “two systems” agreement.

The battle for full democracy, vividly illustrated by 79 days of ‘Occupy’ street protests in 2014, has been a defining issue for the city of 7.3 million. It has sown distrust, polarised politics and hampered governance.

“In the 20 years since Hong Kong was returned to the motherland, the success of ‘one country, two systems’ is recognised by the whole world,” Xi said in a speech.

“Of course, during the implementation, we’ve met some new situations, new issues and new challenges. On these issues, they need to be regarded correctly and analysed rationally… Issues are not scary. The key is to think of ways to solve these issues.”

Without giving specifics, Xi said these needed to be corrected and not handled with an “emotional attitude”.

But in a stark and surprising announcement, the Chinese Foreign Ministry said the 1984 Sino-British Joint Declaration on Hong Kong, which laid the blueprint over how the city would be ruled after 1997, no longer had any practical significance.

British Foreign Secretary Boris Johnson on Thursday had said Britain’s commitment to Hong Kong, enshrined in the “treaty”, was “just as strong today” as it was 20 years ago.

“Now Hong Kong has returned to the motherland’s embrace for 20 years, the Sino-British Joint Declaration, as a historical document, no longer has any practical significance, and it is not at all binding for the central government’s management over Hong Kong,” Chinese Foreign Ministry spokesman Lu Kang said.

“The UK has no sovereignty, no power to rule and no power to supervise Hong Kong after the handover.”

It wasn’t immediately clear if Lu was attacking just the idea of continued British involvement in Hong Kong, or the principles in the document itself.

Some lawyers said China‘s disregard for the bilateral treaty was worrying.

“It is a really grave matter for the Chinese to now say the effect of the Joint Declaration was spent. So the carpet, so to speak, has been pulled from under Hong Kongers’ feet,” said barrister and former democratic lawmaker Alan Leong.

Xi earlier inspected more than 3,000 People’s Liberation Army troops on the second day of his first trip as president to the financial hub ahead of Saturday’s anniversary. The PLA said it was the largest military parade in the city since the 1997 handover, though it was similar in style and tone to the one given by his predecessor, Hu Jintao, in 2012.

The presence of the PLA in the city has long been one of the most sensitive parts of the city’s reversion to Chinese rule, but the garrison, thought to number between 8,000 and 10,000, has kept a noticeably low-key presence.

Security has been tight ahead of the July 1 anniversary, with some 9,000 police reportedly deployed to maintain order. Protesters have been kept well away from Xi and his entourage, his hotel, and the venue for Saturday’s ceremony.

Banners critical of China have been largely absent from the streets, though a rally on Saturday could draw tens of thousands of people in an annual demand for full democracy.

Few expect anywhere near the scale of protest seen during the 2014 Occupy movement during Xi’s visit, but activists and civil society groups are planning a number of demonstrations.

Hundreds of protesters demanded the release of Chinese Nobel Peace laureate Liu Xiaobo and justice for victims of the Tiananmen crackdown in Beijing in 1989.

But the organisers of a pro-independence rally claiming that Hong Kong had now in effect become a repressed Chinese colony called off their plans at the last minute because of what they said was heavy police pressure.