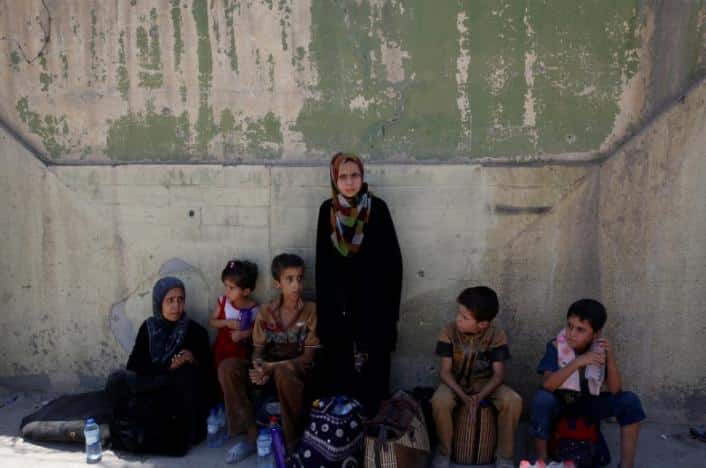 Displaced Iraqi civilians rest on a sidewalk at the Iraqi forces positions after they were rescued at the battle site near Grand al-Nuri Mosque at the Old City in Mosul, Iraq June 29, 2017

Iraqi government forces attacked Islamic State’s remaining redoubt in Mosul‘s Old City on Friday, a day after formally declaring the end of the insurgents’ self-declared caliphate and the capture of the historic mosque which symbolised their power.

Dozens of civilians fled in the direction of the Iraqi forces, mostly women and children, some wounded by insurgents fire, thirsty and tired.

The battles ahead will be difficult as most of the militants are foreigners expected to fight until the death. They are dug in among civilians, using them as human shields, Counter Terrorism Service (CTS) commanders in the city told Reuters.

CTS Major General Maan al-Saadi said it could take four to five days of fighting to capture the insurgents’ redoubt by the Tigris River, defended by about 200 fighters,

“The advance continues to Midan neighborhood,” he said. “Controlling it means we have reached the Tigris River.”

The insurgent position is several hundred meters wide and tens of thousands of civilians are trapped there in harrowing conditions, with little food, water, medicine and no access to health services, according to those who managed to flee.

Those who escaped on Friday streamed through alleyways near the Grand al-Nuri Mosque, which Islamic State fighters blew up a week ago.

Plumes of smoke billowed over the riverside districts amid artillery blasts and burst of gunfire. Western troops from the US-led coalition were helping adjust artillery fire with air surveillance, he said.

Iraqi Prime Minister Hailer al-Abadi declared the end of Islamic States’ caliphate – which he called “a state of falsehoood”‘ – on Thursday after CTS captured the ground of the ruined 850-year-old mosque.

It was from the mosque’s pulpit that Islamic State leader Abu Bakr al-Baghdadi declared his caliphate over parts of Syria and Iraq almost three years ago to the day.

The insurgents chose to blow it up rather than see their black flag taken down from its al-Hadba, or Hunchback, minaret where it had been flying since June 2014.

The symbolic victory of the Iraqi forces was won after more than eight months of grinding urban warfare which displaced 900,000 people, about half the city’s pre-war population, and killed thousands of civilians, according to aid organizations.

A US-led international coalition is providing air and ground support to the offensive, which army and federal police units are also taking part in, attacking from different directions.

The fall of Mosul would in effect mark the end of the Iraqi half of the IS caliphate, although the group still controls territory west and south of the city, ruling over hundreds of thousands of people. Its stronghold in Syria, Raqqa, is also under seige..

The group continues to occupy an area as big as Belgium across Iraq and Syria, according to IHS Markit, an analytics firm.

Al-Baghdadi’s speech from the Grand al-Nuri Mosque on July 4, 2014, was the first and only time he has revealed himself to the world.

He has left the fighting in Mosul to local commanders and is believed to be hiding in the border area between Iraq and Syria, according to US and Iraqi military sources.

The group has moved its remaining command and control structures to Mayadin, in eastern Syria, US intelligence sources said last week, without indicating if Baghdadi was also hiding in the same area.

The secretive Islamic State leader has frequently been reported killed or wounded. Russia said on June 17 its forces might have killed him in an air strike in Syria. But Washington says it has no information to corroborate such reports and Iraqi officials have also been sceptical.

A minute with Katerine Duska Singer-songwriter

Dennis to sever links with McLaren in end of an era

Lebanon to vote in first election since financial meltdown