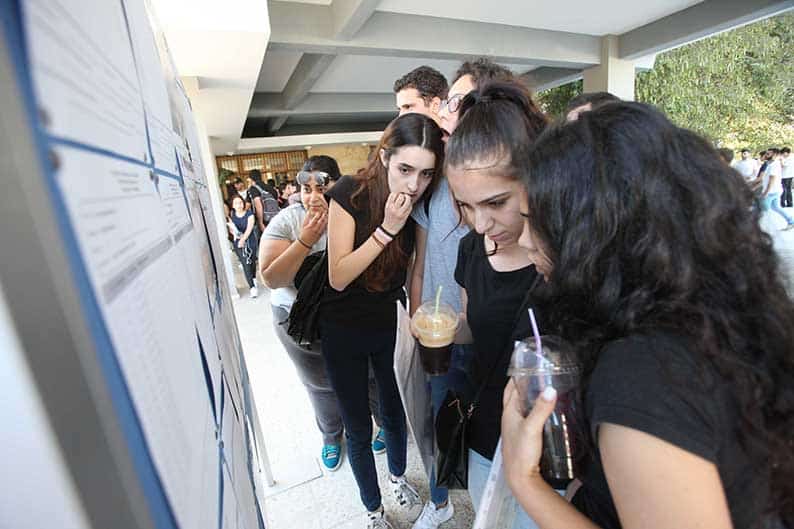 CHRYSTALLENI Tryfonos, a student at the Agios Neophytos lyceum in Paphos, scored top marks of 20 out of 20 in the Pancyprian exams, while across the island 40 percent of those who sat for the exams hoping to win a place at university or college were successful, Minister of Education Costas Kadis said on Friday.

In all, 8,137 high school students sat for the exams, with 5,592 aiming for enrolment at a university. The rest needed to pass to secure their graduation diploma, or ‘apolyterion’.

“Despite the hard work I’ve been doing during this year, I did not expect to win first place. I feel happy, satisfied and proud, and I am now looking forward to the future,” said Chrystalleni, who has won a place to study English at the University of Cyprus.

In second place was Kyriakos Costa from the Pancyprian gymnasium in Nicosia, who scored 19.96 and will study classics and philosophy at the University of Cyprus.

Zina Charalambous from Apostolos Markos high school in Nicosia was third with a score of 19.83 and will study medicine at the University of Cyprus.

“Some 2,224 positions will be offered, according to the preferences of the candidates, at the University of Cyprus, the Cyprus University of Technology in Limassol (Tepak), the Higher Hotel Institute and the military academies of Greece,” Kadis told reporters at a press conference.

Pupils who have passed the Pancyprian exams can also study at universities and technological institutes in Greece.

Kadis said there had been fluctuations across the various courses and that averages had increased by a small margin.

Students taking the exams in their current form are aiming to graduate from public secondary education, higher education in Cyprus and Greece, or do both. Kadis said the ministry is working on simplifying the system.

“The ministry of education, recognising this weakness, has made improvements by separating the Pancyprian examinations into graduate and access examinations, and proceeded to the introduction of other innovations,” Kadis noted.

Cyprus also has many international private schools where children can do IGCSEs, A Levels and the International Baccalaureate to enter any one of the private universities on the island, while the state University of Cyprus now also accept a number of students based on their A level exams.