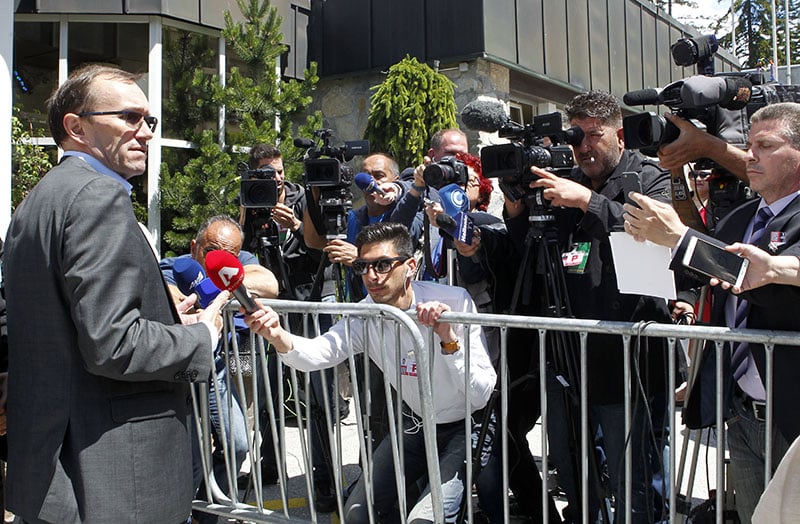 Eide speaking to reporters in Crans-Montana

A lot of hard work awaits the Greek and Greek Cypriot delegations over the weekend to prepare for Monday when talks at Crans-Montana resume, Greek Foreign Minister Nicos Kotzias said on Saturday, adding “we are not afraid of hard work”.

Following the morning meeting of talks on guarantees in the Swiss resort, Kotzias said that on Monday all parties will be called to answer two “fundamental questions” concerning security and guarantees.

The fourth day of the Conference on Cyprus in the Swiss resort convened on Saturday morning following the departure of UN Secretary-General Antonio Guterres the same day.

The talks on guarantees were interrupted at lunch on Saturday, around 12.40pm Cyprus time, while discussions at Table 2, on internal matters began soon after. There will be no evening sessions on Saturday, and talks are to resume on Monday morning.

According to media reports, it was agreed on Saturday that all parties would submit their proposals on security and guarantees on Monday.

Following Saturday’s meetings, UNSG Special Adviser Espen Barth Eide said that the essential elements of a package that may lead to a comprehensive settlement of the Cyprus problem had emerged from the working dinner Guterres held on Friday night for the heads of the participating parties to the Conference.

The package, Eide said, has not many but very specific elements which are being negotiated now on the two tables.

The two tables this morning discussed the issues of the package that was relevant to each, he said. “A package of issues has been identified and if we manage to solve those we will have basically the elements of a comprehensive settlement”.

“This morning we started well and we will continue over the weekend when the delegations will work on their own on developing these ideas and Monday morning we will be back here between 9 and 11am at the two tables,” Eide said.

He added that “physical papers will be on the table on Monday morning on all essential issues across all chapters. There are clear issues on the guarantees and security table and clear issues on the bicommunal parallel table which are jointly understood that they are “make or break” issues. There are other issues but not of the ‘make or break’ nature, they are not a divergence or importance that will make the deal impossible”.

On Monday morning, he said, all sides will give their positions on separate papers “and hopefully at the end it can be one paper”.

He had said earlier in the day that this is a systematic process of negotiations. “Now we actually are negotiating”. He also said that it was a very constructive dinner with the UNSG which basically set out a working plan on everything and identified the issues needed to be finalised.

All sides expressed their satisfaction – some more than others – at the presence of Guterres at the talks on Friday.

The Greek Cypriot side reportedly feels that Guterres’ presence was helpful but that the UN has no say in the talks, as it is the parties involved that take decisions. According to reports, the Greek Cypriot side maintains that progress at the talks will depend on developments in the security and guarantees chapter.
Kotzias expressed on Saturday his satisfaction with the stance taken by Guterres on the main issues on the table.

“We had a very interesting discussion last night. The UNSG expressed his views on central issues. I think the opinions he has expressed move in a positive direction,” Kotzias said. He added that he is optimistic.

He also said the negotiations are expected to continue well into next week.

State broadcaster CyBC reported that the Turkish side is optimistic and expressed its satisfaction at Guterres’ presence. The Turkish delegation, CyBC reported, believes that the conference could lead to a settlement solution.

It added that Foreign Minister Mevlut Cavusoglu reportedly cancelled his participation in the G20 meeting which is to take place in Berlin on July 7 and 8 as he is determined to remain at the Swiss resort throughout the talks.

CyBC also said that according to unconfirmed reports by the Turkish side, Guterres might return on Sunday to participate in Monday’s talks.

In a written statement on Saturday Guterres said that Friday’s working dinner was positive and results-oriented.

“In a positive, results-oriented meeting of the Secretary-General with the Heads of Delegation last night, a clear understanding emerged of the essential elements of a package that might lead to a comprehensive settlement in Cyprus,” a UN statement said. It added that Guterres “remains fully engaged in these efforts to deliver a comprehensive settlement to the people of Cyprus”.

Friday’s working dinner concentrated on the progress that is required on securities and withdrawal of troops, implementation and securing the implementation of a solution.

On the internal aspects of the Cyprus problem discussed at Table 2, Guterres called on the two leaders to concentrate on achieving further progress and convergences.

The UNSG urged all parties to continue with the chapter of security and guarantees, which, he said, “is of crucial importance for a comprehensive solution”.

Discussions over the past few days have again shown that there is a commitment to find mutually acceptable solutions on security and guarantees that address the concerns of both communities, he said.

Prior to Saturday’s talks, Anastasiades met Kotzias and the UK Minister for Europe Sir Alan Duncan.
Anastasiades is to inform the National Council which is the top advisory body to the President on the handling of the Cyprus problem, at 7.30pm Cyprus time.

Discussions will continue into next week with the two leaders, technocrats and the foreign ministers of the guarantor parties – Turkey, Greece, UK – with the aim of achieving work on the guarantees issue while more progress and convergences are necessary on internal aspects.

Lions to get physical against All Blacks in crunch clash