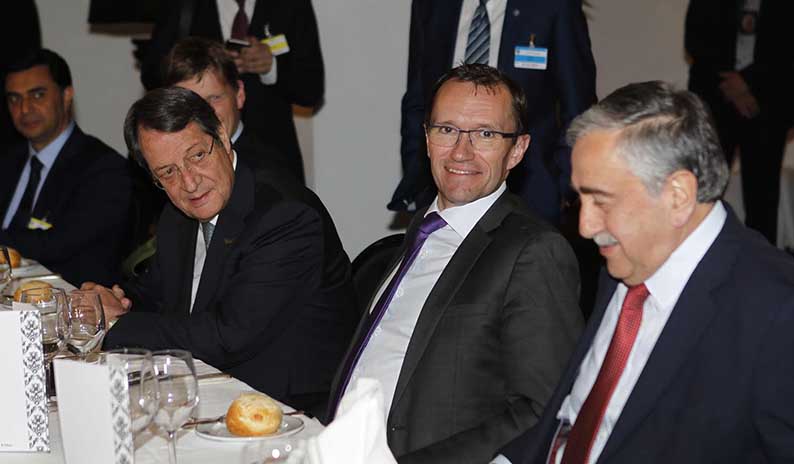 UNLIKE the first two days, when bland news reports trickled out of tense meetings, the arrival of United Nations Secretary-General Antonio Guterres at Crans-Montana for day three of the Conference on Cyprus on Friday injected a breath of life into the proceedings, prompting a flurry of meetings throughout the day and well into the night.

In the aftermath of what turned out to be a minor crisis caused by a remark on Thursday by Turkish Foreign Minister Mevlut Cavusoglu, who said that the Greek and Greek Cypriot sides’ position for no guarantees and zero troops is a “dream they must wake up from”, Guterres kicked off Friday’s sessions with a noon session of the Conference on Cyprus with all delegations participating.

The creation of a working group of technocrats to examine options of monitoring the implementation of an agreed solution was agreed, and the group met at 5pm.

At around this time, news broke of European Commission President Jean-Claude Juncker saying from Tallinn, Estonia, that this was the “last chance” for a Cyprus solution.

Asked why he wasn’t at Crans-Montana, as he had been at the first Conference on Cyprus in Geneva, Juncker said he was “always ready to take the plane when it comes to being useful to Cyprus or to Greece”.

“This time I couldn’t take the plane because I had to be in Tallinn,” he said.

“I said that this is the last chance for the reunification process of Cyprus and I will do everything to be helpful and supportive in the process.”

The statement prompted some alarm in the Greek Cypriot delegation, which has been resisting the idea of a “final conference”, as repeatedly expressed by Cavusoglu in the last two days.

Guterres then met successively with the Foreign Ministers of Greece and Turkey, before his public statement and Q&A session.

It was the Turkish side’s turn to voice alarm at Guterres’ remark for “slow progress”, which seemed to suggest the process might drag out.

News of the Turkish diplomat cancelling a meeting with his Greek counterpart Nicos Kotzias cast a shadow over the newfound optimism, which was confounded by news of a last-minute change in the format of the afternoon session of talks – instead of holding a plenary session on security and guarantees, it was decided that a small-format round of talks between Guterres, Anastasiades and Akinci would be held.

The Greek Cypriot side leaked that the afternoon session addressed the issues of properties and governance, as well as preparatory talks for a working dinner to be hosted by Guterres for all delegation leaders plus one delegation member each.

The dinner concluded at around 1am, and initial reports described it as “positive”.

Local daily Politis reported that Guterres is departing Crans-Montana and will not participate in day four of the conference.

The paper added that the conference is scheduled to have a morning session at 10am, and then will break for the weekend, resuming on Monday.

Hellenic must not let the banking union dictate terms