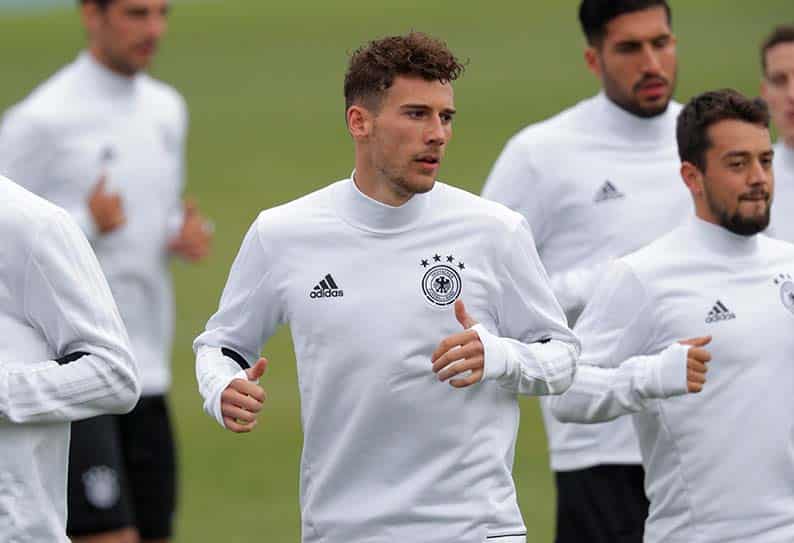 Germany’s Leon Goretzka and Amin Younes (right) during training at the Petrovsky Stadium in St. Petersburg

GERMANY will take on Chile in Sunday’s Confederations Cup final feeling like they have already won the tournament after a fine run with a second-string team has yielded several top prospects for next year’s World Cup defence.

Coach Joachim Loew is not a huge fan of a the eight-team event that acts as a dress rehearsal for the subsequent year’s World Cup and he opted to rest many of his first-choice players for the Russia tournament rather than shorten their off-season.

Among those missing are Mats Hummels, Jerome Boateng, Toni Kroos, Sami Khedira, Manuel Neuer and Marco Reus as Loew opted to take a team made up of young hopefuls keen to gain valuable tournament experience with 2018 in mind.

Loew got more than he bargained for, however, and will be spoilt for choice on Sunday with several players, such as joint top-scorers Leon Goretzka and Timo Werner, and Lars Stindl, showing great promise at the Russian event.

While a title against the South American champions, which would be Germany’s first in this competition, would be more than welcome, Loew is more interested in preserving team spirit ahead of the showdown in St Petersburg.

“The boys are having fun, they are hungry for success,” Loew told reporters. “You can really feel that. I think what we are seeing is the creation of a team here.”

It is this team spirit that has carried the Germans through the tournament after Loew’s squad selection initially raised eyebrows with the team having never played together before.

“Chile are the strongest opponents in this tournament, we know them pretty well and we expect them to go for it in the final,” added Loew, whose team drew 1-1 with the South Americans in a group stage encounter.

“They will be trying flat out to pull it off, as they are coming to the end of their season, and we will have to try and counter that.

“We know the Chileans are flexible in their game. They have been pursuing their own style for many years now, a very good and positive development.”

Hard-working Chile will again seek to challenge Germany for possession using a high-octane pressing game orchestrated by Alexis Sanchez but a better conversion rate of any chances that come their way is crucial to their hopes of success.

They wasted a number of good opportunities in the semi-final against Portugal before edging out the European champions on penalties to reach their third final in three years after Copa America successes in 2015 and 2016.

“We are from a country that might not be used to these kind of situations,” captain Claudio Bravo said of Sunday’s final.

“So, by playing football, we have the chance to make our people happy so they can forget about their problems. That’s the most beautiful thing of all,” the goalkeeper added.

Our View: Open to question if ‘slow process’ will speed up