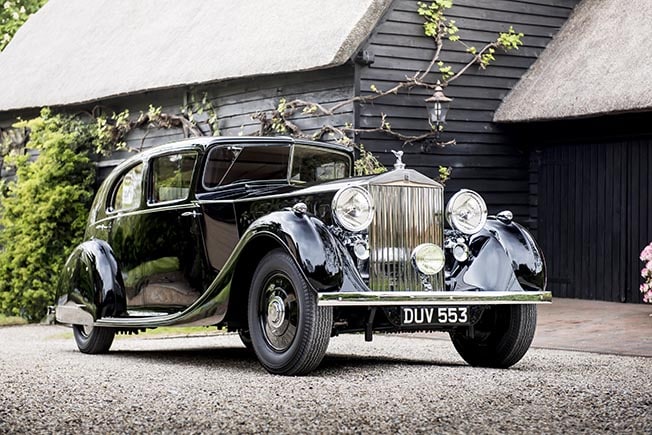 In the lead-up to the opening of the exhibition, Rolls-Royce is announcing which ‘Great Phantoms’ will journey to London from around the world, telling the stories of these motor cars, their fabled owners and the historical events they witnessed

At the end of July a Rolls-Royce Exhibition entitled ‘The Great Eight Phantoms’ will gather together the greatest Phantoms from the last 92 years in Mayfair, London.

The exhibition will also welcome the next generation of this celebrated luxury item, the new eighth generation Phantom.

In the lead-up to the opening of the exhibition, Rolls-Royce is announcing which ‘Great Phantoms’ will journey to London from around the world, telling the stories of these motor cars, their fabled owners and the historical events they witnessed.

Rolls-Royce began producing the Phantom I in 1925. The car was developed in great secrecy, with the project code-named Eastern Armoured Car. This suggested Rolls-Royce was intent on producing the kind of military vehicles used in the First World War, most famously by Lawrence of Arabia. Sections of armour plate were left lying around the factory to confuse curious competitors.

The car was an instant success. The new 7.668-litre straight-six engine gave it a fresh spring in its step. When General Motors opened a testing ground in Michigan, it was discovered that no cars could manage even two laps of the four-mile circuit at full throttle without damaging their engines’ big ends but the Phantom managed that, and more, at a steady 80mph without a failure.

Sir Henry Royce’s desire to “take the best that exists and make it better” quickly led to the creation of the Phantom II in 1929, this time with a totally new chassis, which significantly improved the handling, as well as a re-designed engine.

The third Phantom was to be Royce’s last project: he died in 1933, aged 70, about 12 months into the development of this next Phantom. The finished model, with its 12 cylinder engine, was unveiled two years later and production lasted from 1936 until the Second World War. The final chassis was produced in 1941, although the war meant it did not receive its coachwork until 1947. No announcement came about a replacement and it looked as if the Phantom was another victim of the war.

In 1950, the Phantom IV appeared. The car was originally intended to be a one-off for Prince Philip and the then Princess Elizabeth. However, a further 17 were commissioned at the request of other royal families and heads of state around the world. Fitted with a straight-eight engine, it performed superbly at low speeds – essential for taking part in ceremonial parades – and featured the kneeling version of the famous Spirit of Ecstasy bonnet mascot.

The Phantom V was produced between 1959 and 1968 and 516 of this hugely successful model were made for clients including the Queen Mother, King Olav of Norway and John Lennon.

The long-running Phantom VI (1968-90) carried on the royal connection, notably with the Silver Jubilee Car, a raised-roof version presented to Queen Elizabeth II in 1977 by the British motor industry to celebrate her 25 years on the throne, and later famously used at the wedding of the Duke and Duchess of Cambridge.

In 2003, the world greeted the Phantom VII, the start of Rolls-Royce’s renaissance at its new home in Goodwood, West Sussex. It was sharply contemporary yet retained Phantom’s characteristic aesthetic. It featured a 453bhp 6.75-litre V12 which took it from 0-62mph in 5.9 seconds. Production of the Phantom VII ceased 13 years later at the end of 2016.

The first of the historic Phantoms on show next month will be the 1927 Phantom I previously owned by Fred Astaire. The bespoke coachwork was by Hooper of London which was updated in the early 1930s by Inskip in New York who added scalloped woodwork to the interior and Art Deco rear indicators on either side of Fred’s Louis Vuitton travel trunk.

Also on display will be the Phantom III of British Field Marshal Montgomery, 1st Viscount Montgomery of Alamein.

Although he was nicknamed the ‘Spartan General’ because of his ascetic lifestyle, Monty demanded the very best when it came to his personal transport.

During World War Two, the Field Marshal had the use of three Rolls-Royce Phantom IIIs.

The first, a 1936 model coach-built by Freestone & Webb, was owned by the head of the Talbot Motor Company, Frederick Wilcock, before being requisitioned by the Ministry of War Transport Section. Montgomery used it as his personal transport in the run-up to D-Day, and used it to ferry Winston Churchill, General Eisenhower and King George VI to D-Day planning sessions at his base in Southwick House, Hampshire.

But it is Monty’s favourite, the ‘Butler’ Phantom III, which will be present at the Exhibition in London. This particular Phantom was commissioned for Alan Samuel Butler, Chairman of the De Havilland Aircraft Company, with bodywork by HJ Mulliner of Chiswick. Its most striking feature was a front-sloping windscreen that made the car 15 per cent more aerodynamically efficient than the standard configuration. The car’s slippery nature was also helped by the enclosed spare tyre and swept tail.

The ‘Butler’ Phantom was Montgomery’s main official mode of transport for many years visiting such eminent addresses as 10 Downing Street, the War Office on Whitehall, the British Prime Minister’s country residence Chequers, and military operations centres such as Northwood in Hertfordshire and the Nato Supreme Headquarters Allied Powers-Europe in Rocquencourt, near Versailles, France.

He kept the ‘Butler’ Phantom until 1962, by which time it had also carried the Prime Ministers of Canada, Australia and New Zealand, as well as taking Monty around the UK to historic meetings, inspections and celebrations.

‘The Great Eight Phantoms’ Exhibition will be the first and only opportunity for members of the public to see this amazing Rolls-Royce before it attends the Pebble Beach Concours d’Elegance in the United States in August, after which it will return to its current owner’s private collection.