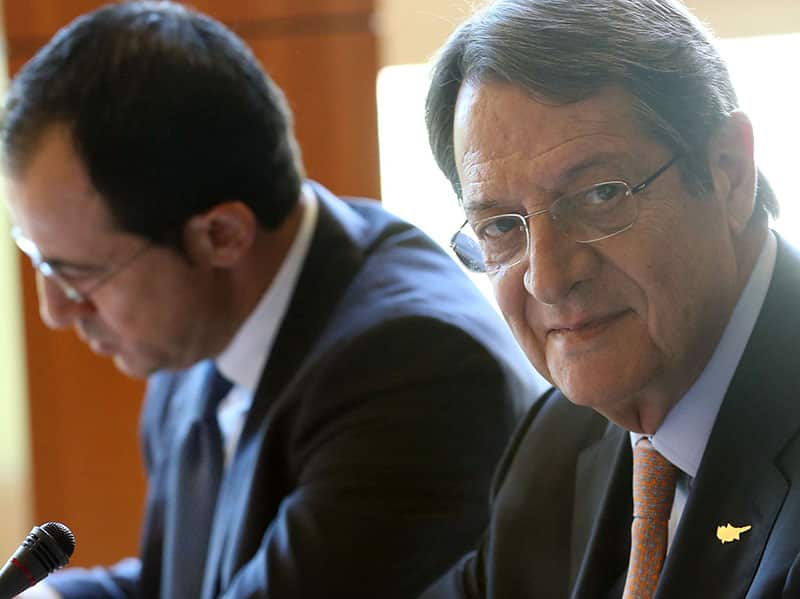 President Anastasiades in Crans-Montana this week

The broad historical sweep in which Europe eventually took centre-stage began with the end of World War II and ended with the collapse of the Soviet Union and the rise of the European Union as a force for peace and civilised values across the globe.

The importance of human rights, freedom of movement of people and the protection of refugees goes back to the years of death and destruction that befell Europe during two world wars.

The UN Charter, the European Convention on Human Rights, the 1951 Refugee Convention and the Treaty of Rome contain the values of the new world order after the ravages of two great wars.  They replaced the League of Nations and the Treaty of Versailles that had been so ineffectual in preserving peace before 1939 and, in the case of the latter, was one of the causes of World War II.

The reason why it is so sad to see Britain leave the EU is her enormous contribution to the liberation of Europe and for being the source of inspiration for all the treaties and conventions of the post war world order. Even the creation of the EU itself was inspired by a speech made by Winston Churchill as early as 1946 calling for the creation of a United States of Europe to enable people to live in peace, safety and freedom.

Lesser men than Churchill have won the argument with the British people, however, and Britain’s departure from the EU began in earnest last week. Sad as it is to admit, her departure presents the EU with an opportunity for achieving an ever-closer union without the drag of a reluctant member like Britain that paradoxically may make Churchill’s dream of a United States of Europe come true.

Britain will probably survive and thrive on her own. And if all else fails she can always revive the idea of a federation of English-speaking peoples. In this modern day and age with instant communications and easy travel the idea of setting up a loose federation comprising Britain, Canada, Australia and New Zealand, last discussed at an imperial conference in 1911, would probably suit Britain better than the EU. These old Commonwealth countries have a lot in common. Unlike member states of the EU they have the common law of England, the English language and a feeling they are kith and kin to cement them.

The coincidence of the start of the Brexit negotiations in Brussels and the negotiations on Cyprus is lost on many people as the two communities and their motherlands battle it out across the negotiating tables at Crans-Montana. In historical terms, however, the timing is of huge symbolic significance even if, as seems likely, the Cyprus talks end in failure.

History speaks to those who listen, and history seems to be is saying that what is being played out in Switzerland is the beginning of the last chapter of the colonial history of Cyprus. Britain is leaving the EU while Cyprus is in the process of completing her accession into it.

The arrangements relevant to colonial times are obsolete. They need to be replaced with a new system that will no longer involve Britain because in the end it will reflect the federal republic’s membership of the EU in accordance with EU law as contained in Protocol 10 attached to Cyprus’ Treaty of Accession. The history of Britain’s involvement in Cyprus is, however, crucial to understanding the thrust of history in the region.

The Cyprus Convention of 1878 was a secret convention between the sultan and Queen Victoria under which Cyprus was to be occupied and administered by Britain to enable her to defend the Ottoman Empire from Russian expansion in the north east of present day Turkey. The concerns of Britain and Turkey in 1878 have now been realised a few hundred miles further south in Syria, although it seems Turkey has learned to live with Russia in Syria in that both countries are guarantors of the ceasefire there. Britain is not, it seems, as adaptable as Turkey when it comes to Russia but then she does not have to be.

The British administered Cyprus under the 1878 convention until 1914 when to Britain’s surprise Turkey entered World War I on the side of Germany. This was as a result of the grandiose vision of Enver Pasha to rejuvenate the Ottoman Empire to the east encouraged by the German Kaiser. Unfortunately, President Erdogan has the same tendencies and should be reminded of this by the Ataturkist wing of his party before he causes real damage to Turkey and the region.

Britain annexed Cyprus in 1914 without a fight. Her annexation was not recognised by Turkey, however, until the Treaty of Lausanne of 1923, which is also the treaty that handed over the sovereignty of Rhodes and the islands along Turkey’s Aegean coast to Italy. Greece got them after the defeat of Italy at the end of World War II.

Cyprus became a Crown Colony in 1925 and remained a colony until independence in 1960. Under the Treaty of Establishment of the Republic of Cyprus Britain granted independence to Cyprus but retained sovereignty over two military bases, which she will keep whatever happens to the treaties of guarantee and alliance that form an integral part of the Treaty of Establishment. These treaties do not stand and fall together, but they do need to be addressed together having regard to their overall object and purpose. If the object and purpose of the treaties is different now than in 1960, all that needs to be done is for the treaties to be amended or repealed to reflect the new state of affairs and how to preserve it.

But that is for the Cypriots and their motherlands. For Britain the sun is setting in the EU and in Cyprus. On a melancholic note from the land of ‘bitter lemons’ to mark Britain’s departure from Europe, and out of respect and gratitude to all her soldiers who gave their lives for the liberation of Europe, it is fitting to remember them with the opening lines from Rupert Brooke’s memorable poem The Soldier.

‘If I should die think only this of me: that there’s some corner of a foreign field that is forever England. There shall be in that rich earth a richer dust concealed.’

Rupert Brooke is buried in an olive grove on the island of Skyros in Greece.

Challenges of an East Med pipeline