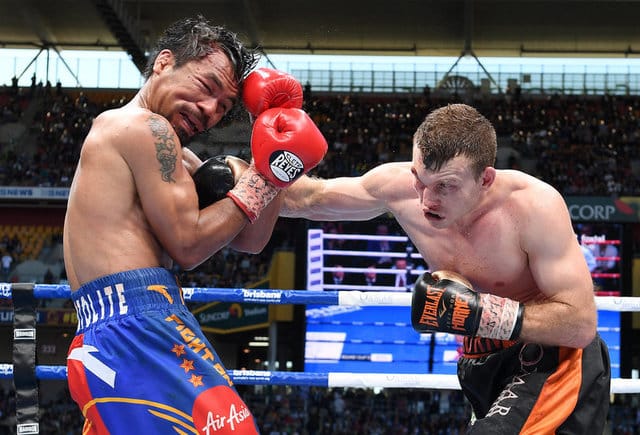 Jeff Horn of Australia punches Manny Pacquiao of the Philippines

Australia’s Jeff Horn stunned Filipino Manny Pacquiao in a bloody Brisbane battle to claim a unanimous 12-round decision and win the WBO world welterweight title in front of 50,000 fans at Lang Park on Sunday.

“I’m so happy, I can’t explain my feelings,” Horn said at ringside, before welcoming the prospect of a rematch.

“I’ve just believed since I was very young that I could do this.”

Pacquiao, one of the finest boxers of his generation, paid the price for a slow start and his inability to end the fight with a knockout.

The 38-year-old was knocked off his stride by the aggression of the taller and heavier Australian in the early rounds but looked to have weathered the storm as the fight wore on and Horn tired.

With blood pouring from both sides of his forehead after accidental butts, the southpaw launched a fierce assault on Horn which nearly ended the contest in round nine.

“Show me something in this round, or I’m going to stop the fight,” the referee warned the Australian.

Horn, who was cut above his right eye in round two, said he had been exhausted and rattled by the Filipino’s punches.

“(But) I was like ‘settle down everyone, I’m fine’. I was recovering pretty quickly.”

The Australian showed remarkable powers of recuperation as he battled gamely on through the final three rounds with Pacquiao, who earned the last of his 38 knockouts in 2009, unable to capitalise on his dominance.

The bout ended with the fighters in a clinch on the ropes and although Pacquiao gave a little shuffle and a grin to show he had plenty left in the tank, his fate was in the hands of the judges.

“Very tough. I didn’t expect that tough,” said Pacquiao, whose record now reads 59-7-2. “It’s okay, it’s part of the game. That’s the decision of the judges, I respect that.”

Pacquiao, who had hoped for an impressive victory to fire talk of another fight against Floyd Mayweather Jr, said he would “absolutely” return for the contracted rematch against Horn.

An emotional Horn brandished a walking stick as he also called out the undefeated Mayweather, who has come out of retirement at 40 years of age for a 12-round crossover boxing match against mixed martial arts champion Conor McGregor.

“This is no joke, which one does he want? The walking stick or the gloves?” the Queenslander said.

The loss stunned people in the Philippines, where Pacquiao, now a high-profile senator, has long been a national hero.

Philippine President Rodrigo Duterte’s spokesman, Ernesto Abella, said the loss “would not diminish the honours he bestowed to the people and to the flag”.

“Nothing will change: Senator Manny Pacquiao will remain our People’s Champ,” Abella said.

Omonia ready for battle against Olympiacos