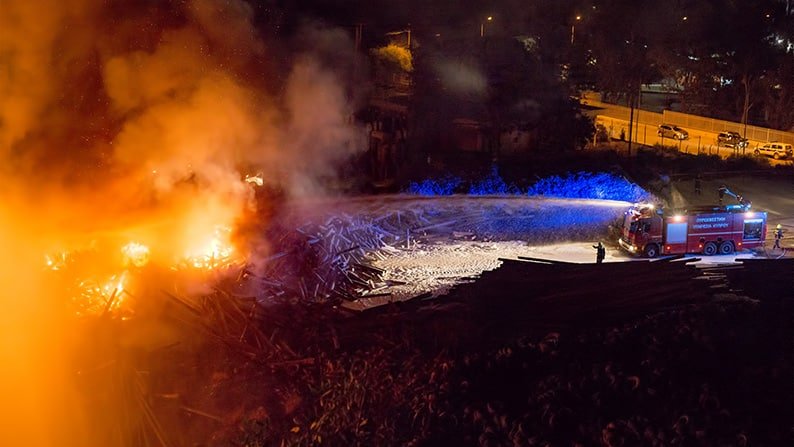 It was no surprise that the fire near the Vassiliko cement factory on Monday began at night as combustible material in the area absorbed heat throughout the day, fire services chief Marcos Tragkolas said on Tuesday.

Speaking at the House environmental committee that convened to discuss fire prevention, Tragkolas explained how before firefighters began using soil to try and obliterate the flames, they noticed quantities of spontaneously combustible renewable biofuel (RBF).

The factory is located in the same area as the VTTV oil depot and an electricity authority (EAC) substation.

The EAC has an agreement with the factory whereby they give it waste materials such as old electricity poles to burn using RBF.

A statement by the fire services said investigations indicate RBF was present around the old electricity wooden poles and plastic material, thus making it highly likely to be the source of the fire and the reason the fire spread so quickly to the nearby flammable materials.

A factory employee had reported that when he first noticed the fire, it was small, but become a full-scale blaze within seconds.

“We are not surprised by the fact that the fire began at night as throughout the day, temperatures had gone incredibly high and the RBF was being used. Combined with the humidity and the winds in the area, it caused the fire to begin,” Tragkolas said.

A spokesperson for Vassiliko was not immediately available for comment, but in earlier statements said the factory was working closely with authorities and that all staff were working under safe conditions.

The fire services were notified at 10.35pm on Monday night that a fire had started in a pile of wood and rubber near the installations. It took until Tuesday lunchtime to bring the flames control  and too eight fire trucks.

According to the fire services, the fire broke out at an EAC storage area. North-easterly winds meant heavy smoke was blown in the direction of Limassol.

The area is also the location of the Mari naval base blast in 2011 which killed 13 people and injured dozens more after 98 containers of munitions that had been stored for two-and-a-half years in the sun self-detonated.

Though discussions for opening a fire station in the area had arisen since then, it has yet to be opened. Plans are underway to have it up and ready by 2019, fire services spokesman Andreas Kettis told the Cyprus Mail.

“It has already been approved. Works will begin in 2018 and the plan is to have it operating by 2019. It will be staffed by 56 firefighters whose sole responsibility will be that area. They will not be called to other areas.”

Speaking broadly on fire prevention, Tragkolas told MPs that he had been in touch with both the environmental committee and community leaders to further cooperate “for cases where the fire services sees some areas or properties at high fire risk.”

The fire services have a duty to notify relevant authorities and recommend any solution, he added.

We need to talk about sex, robot experts say