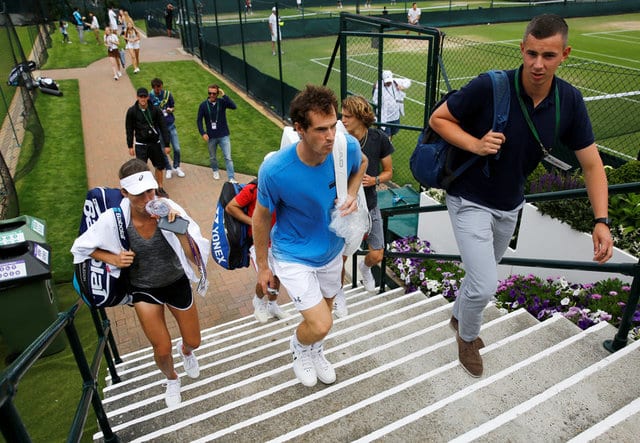 Home fans will be treated to a double-bill of British number ones at Wimbledon on Wednesday when Johanna Konta stars in a revenge play against Croatia’s Donna Vekic before defending champion Andy Murray takes to the stage.

With world number two Rafa Nadal bringing down the curtain on the scheduled matches, taking on the United States’ Donald Young, a few more chapters in the quest for this year’s titles will be written by the end of the day.

“It’s another opportunity for me to try and find a way to come out on top this time,” Konta told reporters about the match-up after her first round win over Hsieh Su-Wei.

Twice champion Murray, who has been suffering with a sore hip, has already dispatched one player with an armoury of unconventional shots, Kazakh Alexander Bublik.

He now takes on 97th ranked Dustin Brown of Germany, whose trademark dreadlocks are often sent flying as he leaps for seemingly ungettable balls.

“You know, he’s unpredictable. You know he’s going to go for it. Also you know he hits a lot of dropshots. He can play slice. Sometimes he hits two first serves, goes for a huge second serve. It’s not easy to play players like that,” Murray said.

One man who knows that all too well is Nadal, whom Brown famously beat in 2015 in the second round.

But this year, a rejuvenated Nadal, 31, is coming into the championship off the back of his 10th French Open win and looking to add to his two previous Wimbledon crowns.

He plays fellow left-hander Young, ranked 43, who reached the second round after Denis Istomin retired on Monday.

“He’s a player that plays quick, hits the ball so quick,” Nadal said of Young. “Sometimes he’s able to play at a very, very high level. Is a dangerous opponent, no? Is a lefty, too, so that makes a big difference.”

Wednesday’s order of play
Order of play on the main show courts on the third day of the Wimbledon championships on Wednesday (play
starts at 1200 GMT/0800 ET unless stated, prefix number denotes
seeding):

Curating and collecting: a reciprocal relation