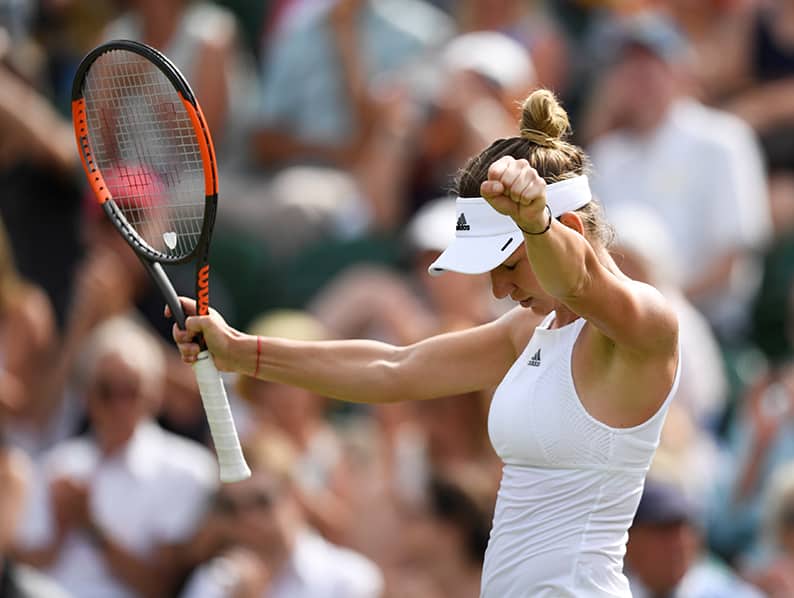 Stealthily, second seed Simona Halep has been creeping through the rounds at Wimbledon, just doing her job, out of the limelight.

She reached the last 16 on Friday with a determined 6-4 7-6(7) victory over experienced campaigner Peng Shuai out on Court Two at the southern boundary of the All England Club.

The win kept the 25-year-old Romanian on course for the number one spot in the rankings and put some order back in the women’s draw after recent upsets, but it was all done under the radar – no fuss.

“It’s open always when I go on court. Anyone can win the match from both of us. So I’m just trying to stay focused, to do my job as good as I can, and just trying to win,” she said.

Even her post-match news conference was almost as much about her next opponent Victoria Azarenka and the Belarussian’s comeback after having a baby as about her own progress, though she could become the world’s top player if she reaches the semi-finals here.

She made the final of the French Open for the second time only last month, going a set and 3-0 up before losing to Jelena Ostapenko, but says, with cheerful briskness, that she has put the disappoinment behind her.

“That upset from the final cannot bring me down.”

On Friday, Halep wore down her 31-year-old opponent with heavy groundstrokes from the baseline, clipping the lines with her penetrating forehands. But it was not an easy ride.

Peng, ranked 37 and no slouch on grass after winning the doubles title here in 2013, broke back to force the tiebreak when Halep looked to be cruising home in the second set. The pair slugged it out until Halep served an ace for a second match point and Peng sent a ball long to concede the match.

Halep, brought up playing on clay rather than grass, said she had one or two nervous moments when she slipped in the baked dust on the baseline but – again taking the positives – said her legs felt strong and she was running well, so “I have no problems”.

“It’s normal and the conditions are the same for everyone,” she said, refusing to get involved in criticisms from some of her fellow competitors, who said the courts were dangerous.

And Azarenka, a former world number one, has a 2-1 advantage over Halep in head-to-heads.

“Every ball, it matters when I play against her. So I have just to be ready, to be fit, to be 100 percent, to go there and believe that I have my chance,” Halep said.

The Wind Will Carry Us to Kaimakli