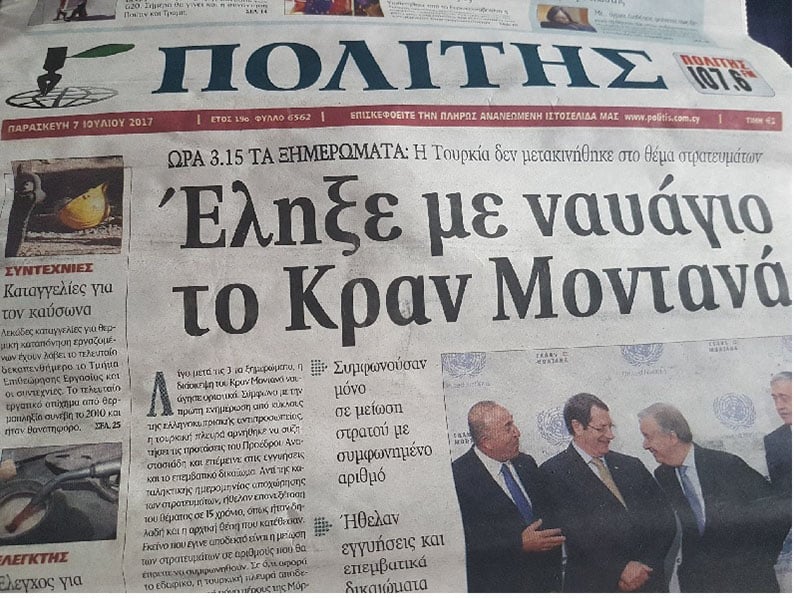 Two main reasons were given for the collapse of the Crans-Montana talks on Friday, one in the south of the island and one in the north.

Turkey’s proposals were the reason of the collapse of the Conference on Cyprus, Greek Cypriot press reported, and President Nicos Anastasiades’ insistence on ‘zero troops and zero guarantees’ was the reason cited in the north.

Following the official announcement of the failure by UN Secretary-General Antonio Guterres shortly after 3am Cyprus time, online Greek Cypriot media were reporting that the Turkish side refused to discuss Anastasiades’ proposals and insisted on guarantees and intervention rights.

As to the withdrawal of troops, they reportedly counter-proposed that instead of setting a final date for withdrawal (the so-called sunset clause), that the issue should instead be revisited in 15 years. Quoting sources, Politis said that Turkish Foreign Minister Mevlut Cavusolglu reportedly said that if the Greek Cypriot side “behaved” during this period, Turkey would consider reviewing the issue earlier.

As to the territory issue, Turkey reportedly accepted to return only part of Morphou, while it demanded primary law and equal treatment of Turkish nationals in Cyprus.

Politis also said that during Thursday’ working dinner Cavusoglu was maintaining that Turkey was ready to discuss all issues but without proposing anything specific, which sparked a reaction by Anastasiades who reportedly said he could not sign a settlement agreement providing for ‘flexible guarantees’.

Anastasiades’ proposal the daily said, provided for flexibility as to the sunset clause as long as Turkey agreed to no contingents but rather the participation of Greek and Turkish nationals, in reduced numbers, in an international police force.

The proposal reportedly would have allowed for the rotating presidency to be granted to the Turkish Cypriot side as well as acceptance of the equal treatment of Turkish citizens at a ratio of 4:1 in favour of Greek nationals based on overall population numbers.

But these concessions, the daily said, would be made only if Turkey made concessions on the abolition of the 1960 Treaty of Guarantee, and intervention rights, and if the Greek Cypriot side’s demand on the sunset clause for total withdrawal of troops eventually, was satisfied.

Kathimerini reported something similar while Sigmalive went all out on how the “Turks blew up the talks”. The news portal said that Turkey showed once more its “provocative and intransigent stance” and that Cavusoglu “showed his true intentions”.

It also reported that there was tension at the dinner between Cavusoglu, Anastasiades and Greek Foreign Minister Nicos Kotzias – diplomats used the word ‘yelling’ – after the latter insisted Cavusoglu submit Turkey’s proposal.

Under the title, “The talks have collapsed due to the Turkish side,” Phileleftheros said it was due to the persistence of the Turks on guarantees and troops.

In the north, Kibris carried the headline “Disappointment again”, while Yeni Duzen, citing diplomatic sources reported that the deadlock centered on Anastasiades stance on the withdrawal of troops.

Under the title “Unsuccessful conference”, Havadis reported that Anastasiades insisted on “zero troops zero guarantees”, securing Greece’s support. It added that as to guarantees Akinci had said Turkey’s guarantees were important for the Turkish Cypriots and that an agreement which did not include guarantees would not pass a Turkish Cypriot referendum.
Halkin Sesi’s main title was “Collapse”, and Star Kibris’ was “Hopes fell into the water”.

Columnist Ali Kismir, said in Afrika, that Anastasiades’ proposals were courageous while Mehmet Levent, said in another column in the same paper that Turkish Cypriots let Turkey do all the talking.

Levent said that that the negotiations at Mont Pelerin, Geneva and Crans Montana have very clearly and evidently shown that the possibility of reaching a “Cypriot solution” had been lost long ago, because “the Cypriots are unfortunately not competent for solving with their own hands this Gordian knot”. He added that the talks in Crans Montana, Mont Palerin and Geneva were held between the Greek Cypriots and Turkey. Turkish Cypriots, he said, left complete initiative to Turkey.