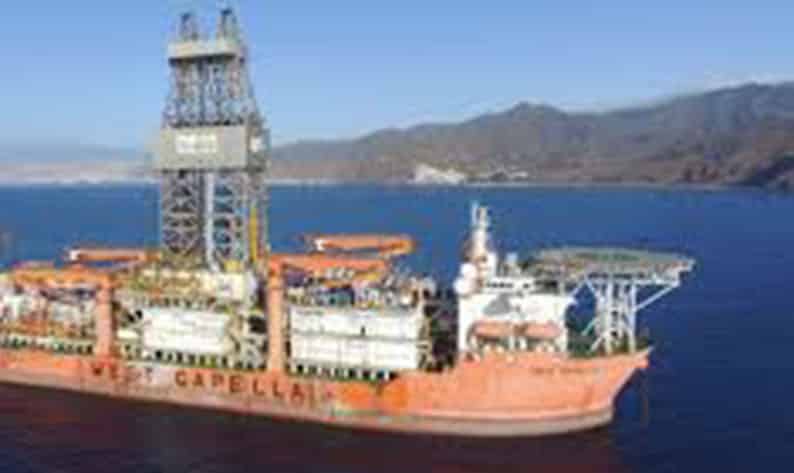 Despite the abrupt collapse of the Cyprus peace talks in Switzerland Thursday night, which threatens a severe deterioration in relations between the governments of the Republic of Cyprus and Turkey, plans by French energy giant Total to start natural gas drilling in Block 11 of the island’s exclusive economic zone proceed as normal.

Total plans to start drilling in the block, located on the southern tip of Cyprus’ EEZ and adjacent to Block 12 (Aphrodite) and Zohr, the block in Egypt’s EEZ where a 30-trillion-cubic-feet reservoir was discovered in 2015, next week, when the arrival of the West Capella ultra-deepwater drillship is expected.

The West Capella is en route to the drilling spot, with an estimated arrival date of July 12.

Supply ship Aldemir Souza Tide, currently docked at the Limassol port, will be accompanying the West Capella during drilling.

Drilling will take up to two or three months before initial results are announced.

But political concerns over the possible lack of progress in the Cyprus talks – and Turkey’s implied threats to disrupt natural gas exploration in the Cyprus EEZ – have long put a damper on the promising prospects presented by the block.

In 2014, Turkey had dispatched seismic vessel Barbaros Hayreddin Pasa into Cyprus’ EEZ in a bid to disrupt drilling by the ENI-Kogas consortium, prompting a political crisis that disrupted the bicommunal peace talks for months.

Ignoring the political implications, however, Total has prepared for the drilling ahead of the ship’s arrival, including the drafting of potential scenarios and even taking into account weather conditions.

The drilling point is located 180 kilometres from the island’s south shore, just 8 kilometres away from Egypt’s EEZ.

Drilling is expected to reach a depth of 4,250 metres below sea level.

Daily Phileleftheros has reported that a submarine will video the area surrounding the drilling spot, in order to ensure there are no significant items on the seabed that might be damaged during drilling.

Meanwhile, the Barbaros remains anchored in the port of Mersin, Turkey since the Switzerland talks started, following yet another foray in the area to the north and north-east of Cyprus.