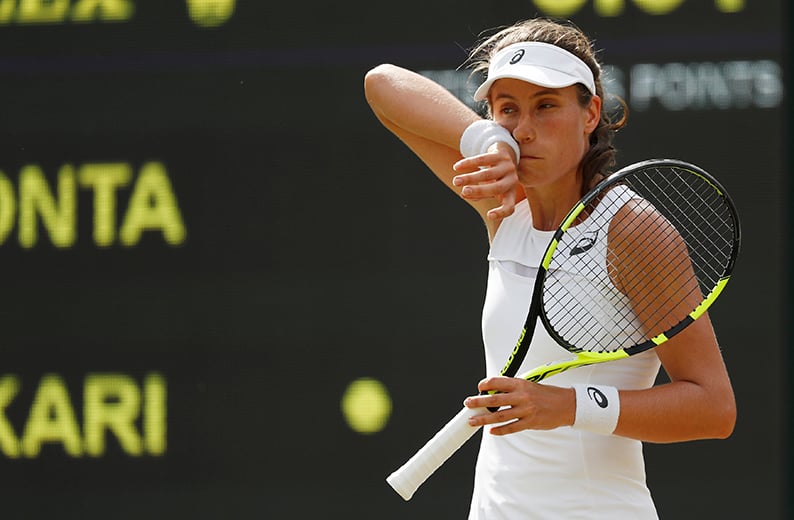 Johanna Konta kept the flag flying for British women at Wimbledon on Friday, reaching the last 16 with a comfortable victory over Greece’s Maria Sakkari, and said she aimed to go all the way at this year’s championships.

Konta is the last British woman left in the singles draw after Heather Watson lost to Victoria Azarenka on Centre Court. The sixth seed, who will next play France’s Caroline Garcia, is one of the favourites to lift the title.

“I’m much taking it one match at a time – but definitely working towards staying involved for a full two weeks,” she said after her 6-4 6-1 third-round victory over Sakkari.

“I definitely believe in myself, the fact that I can keep improving, I can keep getting better.”

The 26-year-old announced her intentions from the first game of the match when she twice drew Sakkari into the net before passing her with crisp cross-court winners to break serve.

Roared on by a packed Court One crowd, she grew stronger and stronger as the match progressed, dominating the baseline duel.

A nervous-looking Sakkari, aged 21 and ranked 101 in the world, compounded her plight with a string of unforced errors, spraying the ball long and wide on decisive points.

Konta once said that if she had a house, she would remortgage it to go see rock band U2. As chance would have it, Bono and company are playing in London this weekend, just a few miles away from SW19, but she said she would not be taking time out from her Wimbledon regime to see them.

“I’m actually seeing them a few weeks later,” she smiled. “I didn’t have to mortgage my house either.”