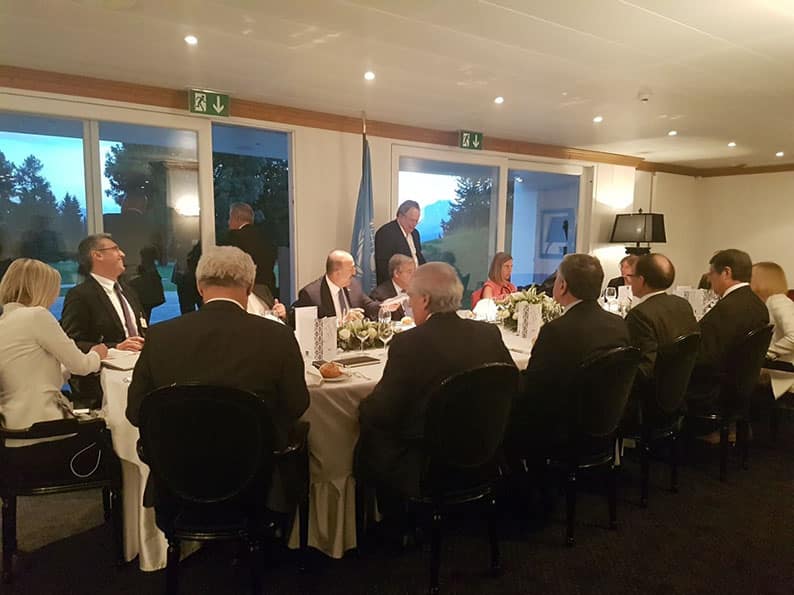 DAY 9 of the Conference on Cyprus ground into the early hours, amid minute-to minute chatter that the sides were equally poised to agree in principle a new security and guarantees arrangement for the divided island, or were moving towards a breakdown in the talks.

The only third scenario would be a continuation of negotiations in the morning.

In the words of the British Permanent Representative to the United Nations Matthew Rycroft, the UNSG “is straining every muscle to get Cyprus talks over the lines”.

“He was there on Friday and on Saturday, he is there today. He is straining every muscle to get these talks over the lines. It’s a historic opportunity. There is still some distance between the parties. We are doing everything we can – as a guarantor in Cyprus – as well,” Rycroft said.

The bilateral meetings paused shortly after 9pm, followed by a second round of meetings between Guterres and the two leaders before the working dinner hosted by the UN chief. The conference proper had been called off due to the run-over of the separate meetings.

“Deliberations are ongoing. We need calm and patience. I am well aware of the boundaries within which I am negotiating,” Anastasiades said coming out of the conference venue on his way to the dinner.

Politis reported that sometime after the break and before the start of the dinner, Guterres again met one-on-one with Anastasiades and then Akinci in the UN chief’s s hotel suite, in what the paper surmised was “a frantic attempt at seeking compromises.”

For his part, Kotzias said: “It’s a difficult negotiation. The Greek side has defended international law and Cyprus’ right to exist as an independent state.”

On his way to the dinner, Akinci said only: “It’s going to be a long day. If we don’t put a full stop, then we are not done here.”

Citing sources, CyBC said that during their second tete-a-tete on Thursday, the UN chief sounded out Anastasiades as to whether, should foreign guarantees be scrapped, he was willing to be flexible on the sunset clause or the review clause – the guarantor powers maintaining foreign troops on the island but agreeing to review their status after a certain number of years.

Anastasiades reportedly insisted on full withdrawal of troops within a fixed timetable.

Pundits were kept guessing as the mood in the coverage of the talks swung more than once throughout the day.

Only a little earlier, on its 8pm news bulletin, state broadcaster CyBC cited Turkish sources as saying the United Nations had prepared a draft statement on a ‘political agreement.’

The purported agreement, if struck, would be announced by the involved parties themselves, the same sources told CyBC.

In this scenario, Guterres would extend his stay at the Swiss resort, and on Friday another morning session of the conference would be held for a formal endorsement of the deal.

CyBC said the foreign ministers of Greece and Turkey had been authorised to make decisions on the so-called sunset clause – an end-date for the withdrawal of all foreign troops – without the need for Alexis Tsipras or Tayyip Erdogan to attend the conference.

Were a preliminary accord struck, a date for simultaneous referenda in the two communities could also be announced. The details of the ‘framework agreement’ would be filled in later by technocrats.

But until around 8pm, the Turkish side had reportedly not submitted its proposals in writing to the UN.

Late on Wednesday, news broke that Nicos Anastasiades had submitted to the UN a package proposal – a move that rankled the Turkish side which had not yet seen the proposal.

“Leaking to the press is a not a serious way [of conducting business], and it is dishonest,” Turkish foreign minister Mevlut Cavusoglu told reporters.

“There is nothing new there,” he said of the Greek-Cypriot proposal.

Likewise Akinci, paraphrasing a Greek idiom, had suggested the proposal was leaked “for the eyes of the people…it’s a charm offensive.”

According to CyBC, Anastasiades proposed the abolition of the 1960 treaties of Alliance and Guarantees, as well as a timeline for the eventual withdrawal of all foreign troops from Cyprus over an 18-month stretch and starting on the first day after a solution.

A 2,000-strong multinational force would take over security, commanded by an officer hailing from a European country.

Anastasiades was also said to be willing to discuss the issue of a rotating presidency, at a 2:1 ratio in favour of the Greek Cypriot head of state, and with a common ballot and weighted voting.

Morphou should be returned to the Greek Cypriots, and 60 per cent of Greek-Cypriot displaced persons would end up under Greek-Cypriot administration. Politis reported late that Turkey and the Turkish Cypriots were only willing to give back part of Morphou.

The president further proposed a 4:1 ratio of Greek to Turkish nationals remaining on the island post-settlement.

Early in the afternoon, Guterres had hosted a working lunch for all delegations.

Following the working lunch, Anastasiades and Akinci each had a telephone conversation with US Vice President Mike Pence, whom the president urged to ask US President Donald Trump to raise the Cyprus problem with Turkey’s leader Recep Tayyip Erdogan during the upcoming G20 summit in Hamburg this week.

Pence rang both leaders to underscore US support, the White House said in a statement.

“The Vice President urged President Anastasiades and Mr Akinci to seize this historic opportunity to reunify the island and expressed his confidence in both leaders’ ability to secure a settlement that would reunify Cyprus as a bizonal, bicommunal federation,” the statement said.

In the afternoon, Pence also spoke on the phone with EU High Representative for Foreign Affairs and Security Policy, Commission Vice President Federica Mogherini, who joined the conference on Wednesday.

According to a readout of the call provided by the White House, Pence and Mogherini “agreed on the importance of the ongoing Conference on Cyprus in Crans-Montana, Switzerland, and expressed hope that the Greek Cypriot and Turkish Cypriot leaders will agree to a settlement that would reunify Cyprus as a bizonal, bicommunal federation to the benefit of all Cypriots.”