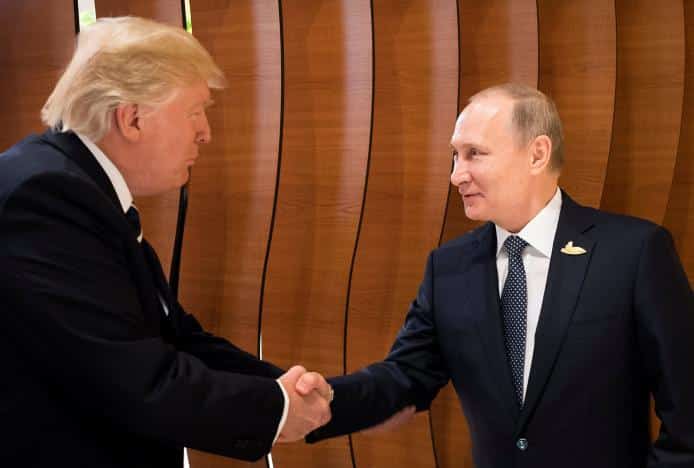 US President Donald Trump and Russia's President Vladimir Putin shake hands during the G20 Summit in Hamburg, Germany in this still image taken from video, July 7, 2017

US President Donald Trump told Russian President Vladimir Putin on Friday that it was an “honour” to meet him for the first time and said he looked forward to “positive things” in the relationship between the former Cold War rivals.

The face-to-face encounter between Trump and Putin at a Group of 20 summit in Germany was one of the most eagerly anticipated meetings between two leaders in years.

Trump promised a rapprochement with Moscow during his campaign for the presidency last year. But he has been unable to deliver on that pledge because his administration has been dogged by investigations into allegations of Russian meddling in the US election and ties between his campaign team and Moscow.

Moscow has denied any interference and Trump says his campaign did not collude with Russia.

Trump and Putin spoke through translators with their respective foreign ministers present for six minutes before reporters were allowed into the room for their statements. Afterwards the reporters were ushered out and the meeting continued.

“President Putin and I have been discussing various things, and I think it’s going very well,” Trump told reporters, sitting alongside the Russian leader.

“We’ve had some very, very good talks. We’re going to have a talk now and obviously that will continue. We look forward to a lot of very positive things happening for Russia, for the United States and for everybody concerned. And it’s an honour to be with you.”

Putin, through a translator, said: “We spoke over the phone with you several times,” adding: “A phone conversation is never enough.”

“I am delighted to be able to meet you personally, Mr. President,” he said, noting that he hoped the meeting would yield results.

Before the meeting, some feared the Republican president, a political novice whose team is still developing its Russia policy, would be less prepared for the talks than Putin, a former KGB agent who has dealt with the last two US presidents and scores of other world leaders.

Amid criticism of Russia’s actions in Ukraine and Syria and the investigations into its role in the US campaign, Trump has come under growing pressure to take a hard line against the Kremlin.

On Thursday, Trump delivered some of his sharpest remarks about Moscow since becoming president, urging Russia to stop its “destabilising activities” and end its support for Syria and Iran.

But Trump stopped short of any personal criticism of Putin and declined to say definitively whether he believed US intelligence officials’ assertion that Russia had interfered in the 2016 US election.

Finnish tourist critical after being run over