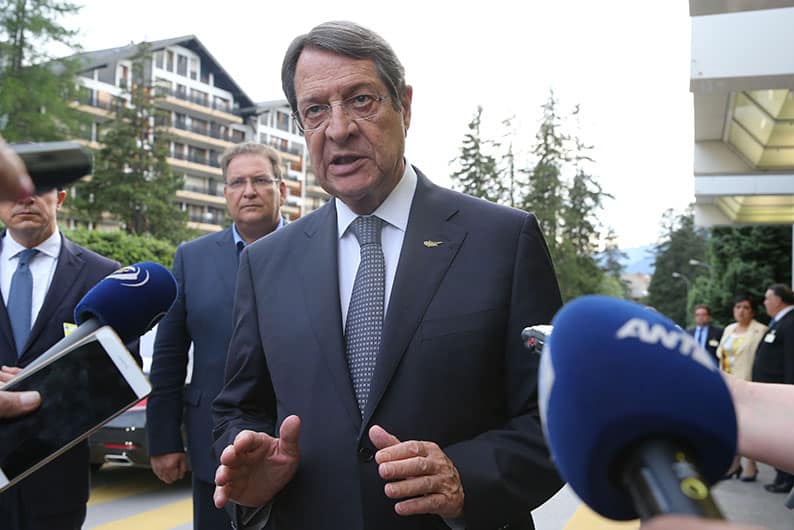 Despite the government’s insistence that responsibility for the dramatic collapse of the Crans-Montana talks lies squarely with the Turkish side for refusing to budge on security and guarantees, independent observers have told the Sunday Mail that this claim is far from accurate.

As government spokesman Nicos Christodoulides on Saturday announced Anastasiades will brief the National Council and the public on Monday on the events that transpired during the conference, information has started to emerge on the goings-on at the fateful four-hour dinner hosted by United Nations’ chief Antonio Guterres on Thursday.

The dinner ended with the UN chief announcing the failure to reach agreement and, crucially, the closing of the previously open-ended Conference on Cyprus.

“The positions they submitted on security and guarantees, as well as the rest of the chapters, not only deviated from the UN secretary-general’s framework, but were such that under no circumstances could they have been accepted by our side,” Anastasiades said in a speech on Saturday, read out by Defence Minister Christoforos Fokaides.

“Due to the intransigence and insistence of the Turkish side on maintaining the Treaty of Guarantee and Turkey’s rights of intervention, as well as the demand to keep Turkish troops, there was no result.”

That may not be the full story. According to a UN source that spoke to the Mail on condition of anonymity, Cavusoglu had “conceded in private to us” that Turkey would be prepared to accept an end to guarantees and rights of intervention.

Reportedly, Turkey had also consented to a clause in Guterres’ framework for negotiations for the Crans-Montana talks, which stipulated a fall-back to the 1960 Treaty of Alliance figures for Greek and Turkish troops on the island – 950 and 650 respectively – with final decisions on whether these were to withdraw altogether, and when, to be made “at a higher level”, meaning the three guarantors’ prime ministers.

“When we signalled this to Anastasiades, he started insisting on zero troops,” the source said.

“He simply didn’t want it.”

Another diplomatic source shared a similar account in which Cavusoglu went out on a limb but soon reverted to Turkey’s publicly stated positions after Anastasiades demanded that he commit to the offered concessions formally.

“It was so close – it could have happened if Anastasiades had been willing to engage,” the well-informed source said.

“Turkey was willing to give hugely on intervention rights, and there was a possibility on the guarantees, maybe [after] a couple of years, with even the possibility of getting rid of it from Day One. There would also have been less troops. [But] Anastasiades wanted it in writing.”

Christodoulides could not be reached for comment, but media reports citing Cypriot government sources corroborate Anastasiades’ demand for the Turkish overtures to be submitted in writing, which may have been the dinner’s coup-de-grace as Cavusoglu refused to commit to any concessions before a comprehensive deal was struck.

“There were errors by everyone,” the same source said.

“There was a lot of pressure put on Turkey by the UN and by Britain over the fact that this was the 21st century, and the Turks ‘got it’.”

If they did ‘get it’, why would Anastasiades have balked at such an opening, instead of pursuing it furiously?

“There were probably all sorts of reasons for why he didn’t accept,” the source said.

“There were a lot of hardliners around him. He was tired. There was a lot of pressure and he couldn’t think clearly. He was on the verge of an historic deal.”

Pressure and cold feet might be perfectly valid explanations, but they ignore the 800-pound gorilla of the island’s domestic politics – next year’s presidential elections some six months away, in which Anastasiades is hoping to clinch a second term.

“I think he somehow thinks that the talks will just reconvene, but it doesn’t work that way,” the Mail’s source said.

Given the incessant on-and-off history of Cyprus problem talks, that may have been a safe assumption, but public remarks by key players after Thursday’s inglorious end – Cavusoglu’s “outside UN parameters” and Guterres’ “wish the best to all Cypriots” chief among them – could spell trouble on that front.

It is also understood that the UN and British teams that were working on the Cyprus issue are breaking up, and that UN special adviser Espen Barth Eide is moving on, although UN spokesman Aleem Siddique on Saturday denied Turkish Cypriot leader Mustafa Akinci’s public declaration that the Norwegian diplomat has resigned his post.

Eide is scheduled to brief the UN Security Council on the talks on July 19.

Regardless of how close a solution appeared during the dinner, and whose fault it really was, the fact remains that it didn’t happen. On paper nothing has changed, and yet this breakdown could usher in a new phase of tension, not least because drilling for gas in Cyprus’ exclusive economic zone, much to Ankara’s dismay, is scheduled to resume next week.

“The way things stand now without a deal, Turkey still has intervention rights in Cyprus,” our source said.

“The troop numbers would have been small and tucked away, and Morphou residents would be going home. Anastasiades blew it, the hardliners are backslapping, and now we’ve got a gas issue. He could have solved it, it was such a good deal.”