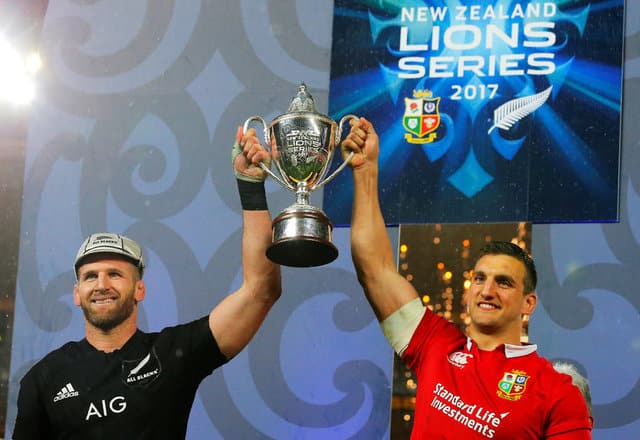 Read and Lions' Sam Warburton with the trophy after the match

Owen Farrell slotted a 78th minute penalty to give the British and Irish Lions a 15-15 draw with the All Blacks and ensure the visitors tied the three-match series 1-1 at Eden Park on Saturday.

The match was not without some late drama, however, with referee Romain Poite overturning an All Blacks penalty in the final minute that would have given Beauden Barrett a routine kick at goal from in front.

“I don’t know, it has been offside for a long time and it turned into an accidental offside,” All Blacks captain Kieran Read said after Poite overturned his original decision. “We have to cop that.

“It’s hard to put into words… but what a series. Both sides going hammer and tongs… and (Lions captain) Sam (Warburton) your team played some great footy so congratulations.

“To my lads it’s a bitter pill to swallow but keep your heads up high.”

The tied series is the second for the Lions after they drew with South Africa in 1955 with the All Blacks winning the first game 30-15 at the same Auckland venue two weeks ago, while the visitors won the second match 24-21 in Wellington last week.

The All Blacks were reduced to 14 men early in the second half when Jerome Kaino was sinbinned by Poite for a high tackle on Alun Wyn Jones.

The All Blacks, who were disappointed with their intensity in last week’s loss, were far more aggressive, dominating territory and possession, but were never able to pull clear of the resilient Lions in a pulsating match.

They created numerous opportunities but were only able to turn their superiority into two first half tries as Ngani Laumape and Jordie Barrett touched down to give the hosts a 12-6 halftime lead.

Farrell slotted two first half penalties for the visitors, who were pinned inside their own territory for much of the first spell.

They were, however, unlucky not to have scored a try of their own when they stretched the All Blacks defence, only for Beauden Barrett to intercept and launch a counter attack that ended after a desperate cover tackle by Jonathan Davies.

Elliot Daly slammed over a long-range penalty early in the second half to narrow the gap to 12-9 before Kaino was sinbinned and the Lions levelled when Farrell added his third penalty just before the loose forward returned.

Barrett slotted his first penalty with about 12 minutes remaining to give his side the lead after Poite penalised the Lions for collapsing a defensive scrum.

Farrell, however, then stepped up with his fourth penalty to level the game, and ultimately the series.

“I’m not sure what to make of that,” Warburton said. “It’s a little bit cheesy but I guess rugby was the winner. “It was an epic test match, real fierce and I’m proud to have played in that.”

Trump says US hopes for quick trade deal with UK

England beat Australia to edge series as Eddie does it again