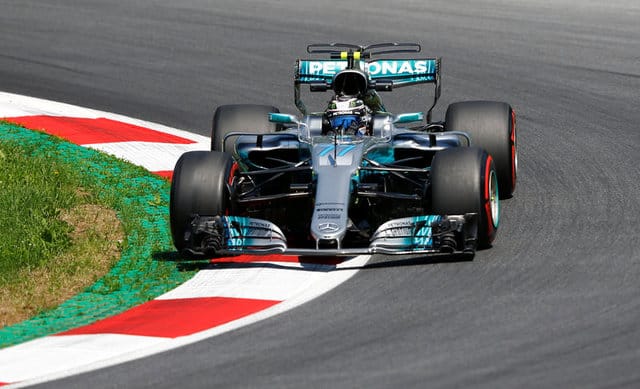 Hamilton, who is 14 points behind Ferrari’s championship leader Sebastian Vettel after eight races, qualified third fastest but will start in eighth place due to the automatic drop resulting from an unscheduled gearbox change.

“I really enjoy driving here. The car was getting better and better as the grip was coming,” said Bottas, who now has a golden opportunity to take a second career win.

“A decent lap at the end, it wasn’t perfect, but it was enough.”

Hopes of a crackling showdown between the Mercedes and Ferrari rivals in the final seconds were blown away when Romain Grosjean’s Haas broke down on track and brought out the warning flags.

The pole was the second of Bottas’s Formula One career after Bahrain in April. Vettel won that race but Mercedes have triumphed in Austria in every year since the Red Bull Ring returned to the calendar in 2014.

“Congratulations to Valtteri, he did a fantastic job and Sebastian has been very quick. It just wasn’t meant to be today,” said Hamilton, whose gearbox was swapped out after the team discovered a problem from the previous race in Azerbaijan.

“I’ll do the best job I can. I want to get up there and get a one-two with Valtteri.”

The Briton’s grid penalty dispelled some of the tension from a weekend that started with continued rumblings from Baku and the ‘road rage’ controversy that has dominated the headlines over the past two weeks.

Vettel had to make a public apology after accusing his rival of ‘brake-testing’ him after the Ferrari driver drove into the back of the Mercedes and then banged wheels while they were behind the safety car.

Although Hamilton has accepted the apology and said he still has “the utmost respect” for Vettel, he refused to play along when asked to shake hands with his rival in post-qualifying interviews.

Television images showed, however, that he and Vettel had done so unprompted after they stepped out of their cars in the pit lane.

“The car was really good. I was hoping for the last run but it was a bit of an anti climax with the yellow flags,” said Vettel, who will fancy his chances of a fourth win of the season. “It’s a great track, the car has been phenomenal.

“I’m looking forward to tomorrow, it should be a good race.”

Hamilton will split Force India’s feuding duo of Sergio Perez, seventh, and Esteban Ocon in ninth. There has been bad blood between the Mexican and French rookie since they collided in Baku while fighting for podium places.

Further back, McLaren slow progress was evidenced by Fernando Alonso in 12th place and Belgian team mate Stoffel Vandoorne in 13th, although only the latter was using the latest specification Honda engine.

Anastasiades blew ‘such a good deal’

Putin says Trump was ‘satisfied’ with his election meddling denials

Hamilton has one last shot to avoid first winless season

Russell takes his first win in Brazil in Mercedes one-two