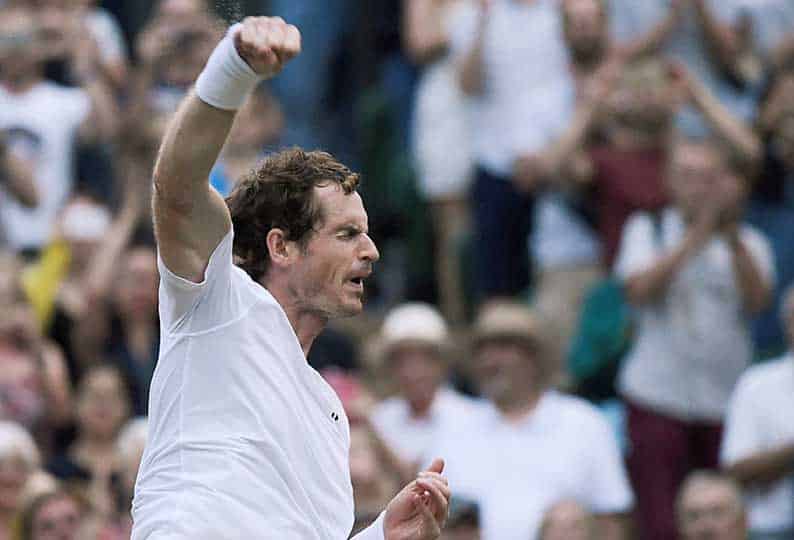 THERE may be doubts over Andy Murray’s fitness and questions about his form but the top seed showed in his Wimbledon tussle with Italian Fabio Fognini that his status as one of tennis’s most determined and dogged scrappers is indisputable.

The world number one and defending champion was far from his best against the 29th-ranked Fognini, but still booked a fourth- round spot with a rip-roaring 6-2 4-6 6-1 7-5 win on Friday.

Murray saved five break points in the fourth set, before winning five successive games to prevent himself being dragged into an energy-sapping decider that would have put further strain on the niggling hip injury he has been nursing.

“I didn’t feel like I played my best tennis,” Murray told reporters. “But I won and I got through it. You know, that’s a really positive thing.”

It is the 10th successive year Murray has reached the last 16 at Wimbledon and he had never lost at this stage to somebody ranked as low as Fognini.

Yet, with the Italian showman having beaten Murray in three of their six previous outings, this was never going to be easy for the Briton and so it proved in an encounter where the momentum swung dramatically from one player to the other.

In tennis terms, Murray and Fognini are polar opposites: the Italian is the epitome of attacking flamboyance, while Murray is a determined defender.

Fognini also spent much of Friday’s encounter strutting around Centre Court, while Murray’s awkward gait seems to have been exaggerated by his hip problem.

That did not seem to be troubling Murray, however, when he broke Fognini twice and raced to take the first set.

The Italian battled back at the start of the second, breaking in the first game, before immediately surrendering the advantage, which prompted him to hurl his racket into the ground and receive his first ticking off from the umpire.

He regained his cool and broke Murray’s serve again in the fifth game, this time consolidating and holding firm to clinch the set.

It was then Murray’s turn to regain the upper hand as Fognini appeared to be struggling with an ankle injury that required treatment on court, allowing the world number one to wrap up the set with two breaks of serve.

Murray’s hopes of an easy route into the last 16 were dashed, however, as the Italian came out firing in the fourth.

After Fognini received a point penalty for what the umpire called a visible obscenity, he broke Murray in the fifth game and then had a series of set points both on his serve and the Briton’s.

Yet, with the Centre Court crowd willing Murray on, the Scot fought back, breaking twice before serving out with an ace.

Papadopoulos makes it to parliament

In search of the truth, not blame game