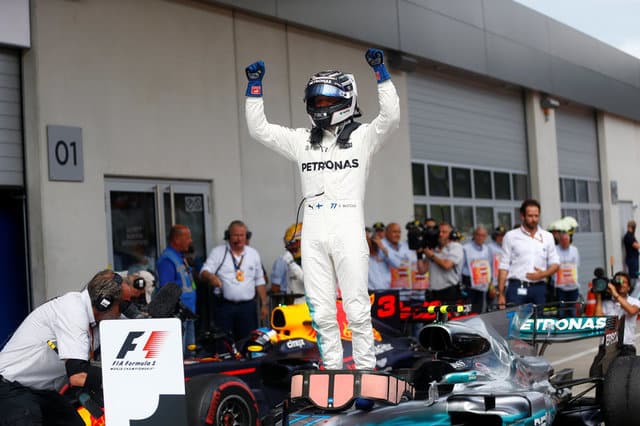 Valtteri Bottas won a cliffhanger Austrian Grand Prix for Mercedes on Sunday with Ferrari’s Sebastian Vettel finishing a mere 0.6 of a second behind to increase his lead over Lewis Hamilton to 20 points after nine races.

“I had a bit of deja-vu in the end from Russia,” said Bottas, referring to his first Formula One win at Sochi in April when Vettel again almost reeled him in at the finish and also crossed the line 0.6 behind.

“At the beginning I could control the race but it was trickier towards the end.”

Australian Daniel Ricciardo finished third for Red Bull, at a circuit owned by the energy drink brand, for his fifth successive podium finish with Hamilton pushing him hard to the chequered flag.

The victory from pole position was the second of the season and of his career for Bottas, who joined Mercedes in January as a replacement for retired 2016 world champion Nico Rosberg.

Apart from the closing laps, with Vettel reeling in the Mercedes in a nail-biting finish and Bottas looking anxiously in his mirrors as he wrestled with blistered tyres, the Finn’s biggest scare came at the start.

Bottas reacted with split-second precision, his getaway so blindingly quick that Vettel alongside immediately questioned whether the Mercedes had jumped the lights. Stewards investigated and took no further action.

“I think that was the start of my life. I was really on it today,” he said.

“I was pretty sure he jumped it,” said Vettel, who felt he would have won with one more lap.

“How would you feel if you were just shy of half a second behind the winner? It was very close.”

As Bottas led away, bits of bodywork went flying behind him in a three-car coming together that drew a groan from some 10,000 orange-shirted Dutch fans around the circuit as Ricciardo’s teenage team mate Max Verstappen was shunted off.

It was the 19-year-old Dutch driver’s fifth retirement of the season.

The Williams pairing of Felipe Massa and Lance Stroll completed the points places after starting 17th and 18th.

McLaren’s Fernando Alonso joined Verstappen in retiring without completing a lap, the Spaniard hit from behind by Toro Rosso’s Daniil Kvyat and pushed into the Dutch driver. Kvyat was given a drive-through penalty.