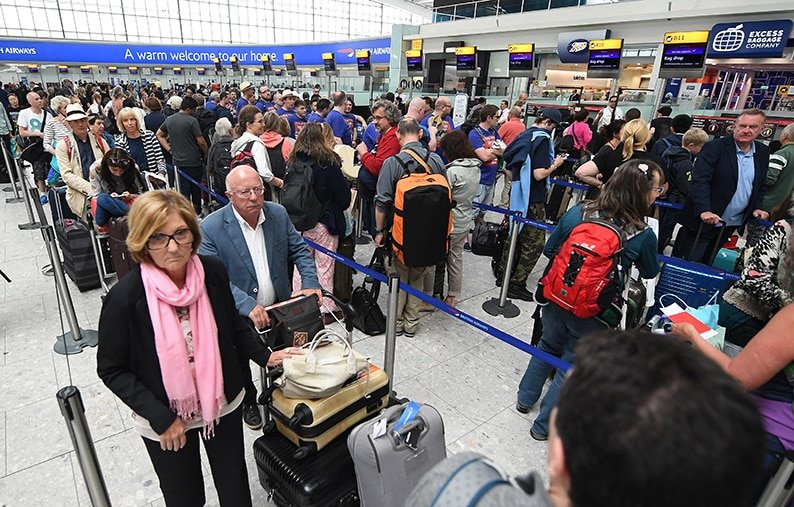 Do you remember those heady days when British Airways opened Terminal 5 at London’s Heathrow Airport?

T5 was designed by the architect Richard Rogers (now Lord Rogers) and cost a mere £4.3 billion. It was opened by Her Majesty in March 2008, or the first part was. The terminal is actually three separate buildings cleverly called A, B and C. Section C was not ready until 2011, and even though the whole is exclusively for BA, a number of BA flights still leave from T3 because T5 is too small!

The T5 ceilings in parts are 130 feet above the ground, and in 2013 it required the assistance of circus high wire artists to replace the failed bulbs. (BA did not take up my suggestion of having packs of guide dogs to help passengers find their way around when all the bulbs finally failed). I question the mentality of an organisation that accepts a building complex that is clearly inadequate for its immediate needs, never mind future expansion, and the mind of any architect who designs a building where a simple change of light bulbs cannot be easily executed.

Memories fade, so let’s remind ourselves of a few of BA’s self-worshipping slogans they put out about T5 way back and which appeared on their website in these exact words:

On the first point, I have always regarded T5 as a massive shopping mall with flights attached. (BA again declined another of my suggestions to blow the whole place up and start again). The second point would be amusing if it wasn’t so pathetic, and as for point 3 anyone leaving T5 on its opening day will remember the complete chaos caused by the immediate breakdown of the luggage system, which separated passengers from their check-in luggage for quite a few weeks!

You may also recall “Quick Bag Drop”, which very quickly became “Bag Drop”, and now just means a place to queue with everyone else. This ‘change’, I’m told, was because so many people check-in online, but clearly BA had no intention to try and speed up check-ins by providing adequate staff numbers.

An Irishman called Willie Walsh became CEO of BA from Rod Eddington (an Australian) back in October 2005 after “shadowing” Eddington for around six months (i.e. working alongside Eddington, being paid a lot but not actually taking any responsibilities).

Anyway, Mr Walsh must have been very responsible for “accepting” T5 on behalf of BA and certainly would have had a lot of input into the above-listed self-worshipping slogans.

If you are big and powerful enough, you can broadcast fancy sound bites and do something else and easily get away with it. Big business and politicians do it all the time, so BA is no exception and Willie has become a master at it.

Willie became known as “Slasher Willie” soon after assuming his God-like position as CEO, and anyone flying as a tourist with BA on a regular basis will have noticed that the “96 Check-in Kiosks” were never fully manned at any time, as Slasher fired a whole heap of staff. So, the promised “seamless check-in” became a lengthy and tiresome series of queues which is now the daily norm in T5.

There is no doubt that BA was ripe for quite a bit of an overhaul, as it still had the musty odour of nationalised wastefulness hanging over it for years after so-called privatisation. I have been flying in and out of Heathrow since 1948 when check-in was in Speedbird House behind Victoria station in London, so I have seen the changes over many years at close quarters.

What the public expect to see from an airline with the Word “British” in its name, and thus considered the UK’s national carrier, is quality service at competitive prices in which UK nationals can take pride. I suggest that there is a very rapid decline in such feeling about the BA that we see today, as remoulded by Willie and, more recently, by his successor Alex Cruz whose ability to run any airline competently must be severely questioned (he was CEO of the Spanish low cost airline Vueling before becoming CEO of BA – a totally different airline ‘format’). Alex is outslashing Slasher in cost-cutting. He also has the title of chairman. Little knowledge of business is required to know that the two titles should never, ever, be vested in one individual. The CEO is the highest ranking executive and should act as the main point of communication between the board of directors and the remainder of the corporation. Another dangerous cost cut? Certainly a very poor administrative one.

As any decent computer expert will tell you, the mass failures of BA’s computer systems at the end of May would not have happened if BA had the proper quality and number of failsafe procedures in place. They blamed an unfortunate minion for their own crass managerial incompetence, and then did their best to stop people claiming compensation which may well, and indeed should, run at well over £100 million. You are unlikely to hear anything more from BA on the subject, as they brazened their way through the entire fiasco, with Willie keeping below the parapet for days, and Alex looking somewhat comical in a high-viz. jacket on air.

The policy of making tourist class passengers pay for food and drink on so-called short-haul flights from January 11 was the start of the shock waves sent out by BA through the airline industry so far this year. BA insists that it is all because of competition from the likes of Ryanair and easyJet. Well now, as I have stated before, between them in 2016 Ryanair and easyJet carried some 190 million passengers just within Europe, compared to BA’s 45 million worldwide. According to BA this new regime will allow them to compete and offer lower fares. Let’s assume that BA takes five per cent of the customers from this competition. That would be 9.5 million passengers. An Airbus A321 has a capacity for 240 passengers so BA will need 39,583 flights to accommodate such numbers, which is 761 weekly flights or 109 daily flights. That’s a lot of Airbus A321s Willie and Alex.

Now we come to the cost of tickets, and BA seem to follow a different line of logic from what I was taught a lifetime ago. I have yet to find a tourist class ticket on BA that is not more expensive than Ryanair, easyJet or even Aegean (who serve food and drink on their flights) and I have quoted a number of examples in previous articles, so how are BA going to capture all these passengers?

My wife and I last flew on BA from LHR to Larnaca (LCA) on June 24. As I paid for the tickets last year, I occasionally check on them on BA’s website. On each occasion we are given the opportunity to upgrade to Business Class. On May 1 an upgrade was offered for £912 each; on June 4 for £635 each; on June 18 it was £1,516 (yet an outright Business Class ticket was available for £937); on June 21 no upgrade was available, but a ticket outright was still at £937, yet on June 23 when we checked-in online the upgrade was £239.

Our next BA flight will be on December 10 from LCA to LHR, for which we paid €120 each. On June 30 a Business Class ticket was available for that flight at €546, but an upgrade from Tourist Class was €1,002.

To best describe BA today, I have to plagiarise Sir Winston Churchill’s remark in 1939 about the Russians, because BA appears to be “A riddle, wrapped in a mystery, inside an enigma.” Regardless, I wish these grossly overpaid foreigners would change the company’s name, because they have turned BA into a national embarrassment.