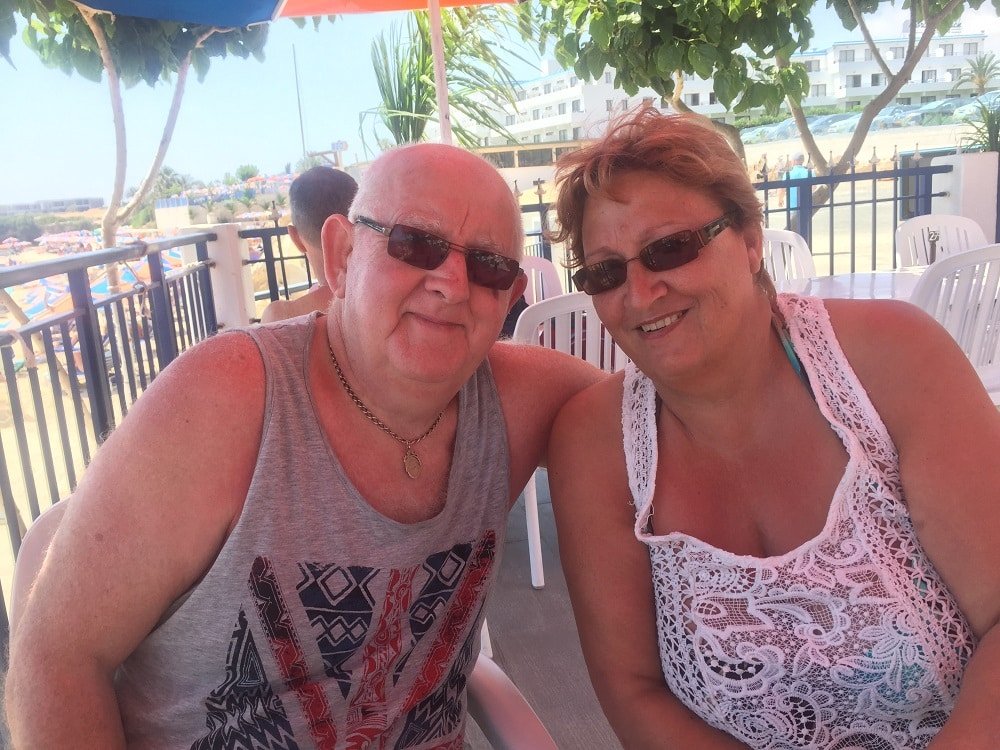 Barry and Ann Hellewell on holiday in Paphos

A Paphos branch of Hellenic Bank left a British couple reeling after they were called back into the bank to pay a substantial sum in commission, which the bank had mistakenly failed to charge them five days previously.

Retirees, Barry and Ann Hellewell, aged 67 and 65, visited the busy branch which is in the heart of the tourist area on June 15 to exchange 900 euros worth of euro cheques.

Regular visitors to Cyprus, the couple had previously used other banks situated along the road to cash similar cheques, but these branches had since closed.

The couple exchanged the cheques and with a 2 per cent commission and other charges, paid a total of 24 euros, said Hellewell. Five days later on June 20, he received a phone call from the bank calling him back to pay further charges.

“We went to the bank and were told that they required another 162 euros from us for the transaction, making it 20 per cent commission,” Barry Hellewell told the Sunday Mail.

The couple, who first visited Paphos 1989 and have been more than 60 times since, said that they were shocked to be called in, but obliged.

“We don’t have a bank account in Cyprus but we have never paid 20 per cent commission on any transactions that we did.”

The couple’s euro cheques were issued by a Thomson travel agency in the UK and they have used similar ones on previous visits, most recently last year.

When the Hellewells went back to the branch, the teller informed them that they were required to pay more commission and then – totally unexpectedly – said this was because the bank had to “send the cheques to Australia”, and it cost a considerable amount of money before the bank gets paid.

While it is possible that the teller meant to say Austria rather than Australia, Hellewell said the teller definitely said Australia, which only added to the couple’s utter bewilderment.

“I replied how much does it cost to put nine cheques in an air mail envelope and send it to Australia. She could not answer my question. When I told her that this action was not encouraging tourists she just nodded her head,” Hellewell said.

The couple also said that they felt alienated as other staff members and the branch manager joined in, all talking in Greek and with no one addressing them personally.

Hellewell said that the teller finally informed the pair that it was an EU regulation which has been in force for around six months.

“We asked to speak to the manager and for someone to write on our receipts in English that we had paid 20 euros per cheque, and we were taken into the manager’s office and he did so,” he said.

“He spoke to the cashier in Greek and did not address us personally, we were then ushered out of his office without getting a chance to speak to him.”

The couple left the bank feeling they had been ‘ripped off’ by the bank as they were expecting to pay between two to three per cent commission. Luckily, they didn’t have to cash any other cheques for their holiday, as they had also brought cash in euros from England.

“If it is common practice to pay a large amount of commission then all banks have an obligation to make tourists aware of this when they travel to Cyprus,” said Hellewell.

If confusion was evident at the branch the couple visited, it was initially equally so when the Sunday Mail tried to contact Hellenic Bank to get to the bottom of the charges and the mysterious Australian connection.

A member of the Hellenic Bank call centre staff first said that euro cheques could not be cashed, but later changed that to saying cashing euro cheques can only be undertaken for amounts over seven euros and are charged at 1.5 per cent.

“There is also a standard fee of 20 euros per cheque,” she added.

The Hellenic Bank’s head office was quick to sort out the issue, clarifying that the final charges were correct and although steep, are the same for all banks in Cyprus.

But a spokesman said the branch should not have made the couple suffer for what was the bank’s mistake in not informing the couple of the charges when they first visited.

“This was an internal mistake and should have been dealt with by the bank,” a spokesman said. “The customers should not have been called back in during their holiday and this is not the image we want to portray of the bank.”

As for the Australia link, the spokesman could offer no explanation. The transactions would have “nothing to do with Australia” and was flummoxed as to why the country was introduced into the conversation.

He added that as acknowledgement of the bank’s mistake, the couple, who are now back in the UK, will have the full amount of the commission charged refunded by the bank. In addition, they will be offered a small traditional gift as recognition and apology for the bank’s mistake, he said.

The Hellewells told the Sunday Mail they were satisfied with the outcome and are now looking forward to future holidays in Paphos.

But they have learned one important lesson. They will never use euro cheques or any other form of cheques in Cyprus.

“We would like to thank the Sunday Mail for investigating our queries, contacting the bank and resolving our problem,” Hellewell said. “We would also like to thank the Hellenic Bank for saying they will refund our money. We do feel that we were treated very poorly by them.”

The UN must tell us the truth about Crans-Montana

Tales from the Coffeeshop: King of the Cyprob swindle