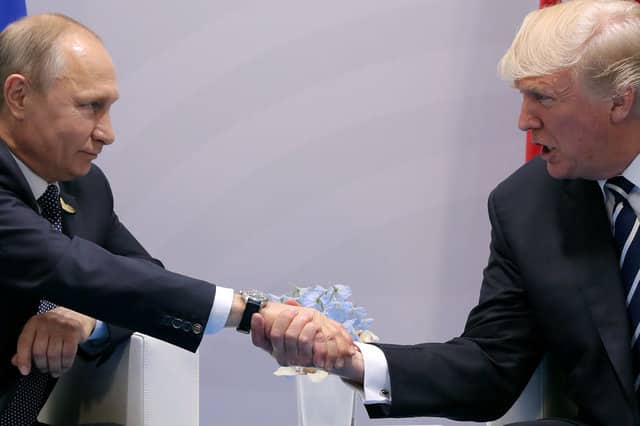 U.S. President Donald Trump shakes hands with Russian President Vladimir Putin during the their bilateral meeting at the G20 summit in Hamburg, Germany

By Valerie Volcovici and Yasmeen Abutaleb

U.S. President Donald Trump said on Sunday he and Russia’s president had discussed forming a cyber security unit, an idea harshly criticized by Republicans who said Moscow could not be trusted after its alleged meddling in the 2016 U.S. election.

Tweeting after his first meeting with President Vladimir Putin on Friday, Trump said now was the time to work constructively with Moscow, pointing to a ceasefire deal in southwest Syria that came into effect on Sunday.

“Putin & I discussed forming an impenetrable Cyber Security unit so that election hacking, & many other negative things, will be guarded and safe,” he said following their talks at a summit of the Group of 20 nations in Hamburg, Germany.

“It’s not the dumbest idea I have ever heard but it’s pretty close,” Graham told NBC’s “Meet the Press” program, saying that Trump’s apparent willingness to “forgive and forget” stiffened his resolve to pass legislation imposing sanctions on Russia.

Rubio, on Twitter, said: “While reality & pragmatism requires that we engage Vladimir Putin, he will never be a trusted ally or a reliable constructive partner.

“Partnering with Putin on a ‘Cyber Security Unit’ is akin to partnering with (Syrian President Bashar al) Assad on a ‘Chemical Weapons Unit’,” he added.

Trump argued for rapprochement with Moscow in his campaign but has been unable to deliver because his administration has been dogged by investigations into the allegations of Russian interference in the election and ties with his campaign.

Special Counsel Robert Mueller is investigating the matter, including whether there may have been any collusion on the part of Trump campaign officials, as are congressional committees including both the House and Senate intelligence panels.

Those probes are focused almost exclusively on Moscow’s actions, lawmakers and intelligence officials say, and no evidence has surfaced publicly implicating other countries despite Trump’s suggestion that others could have been involved.

Moscow has denied any interference, and Trump says his campaign did not collude with Russia.

“I don’t think we can expect the Russians to be any kind of a credible partner in some kind of cyber security unit,” Representative Adam Schiff, the top Democrat on the House Intelligence Committee, told CNN’s “State of the Union” program.

“If that’s our best election defense. We might as well just mail our ballot boxes to Moscow,” Schiff added.

Separately, U.S. government officials said that a recent hack into business systems of U.S. nuclear power and other energy companies was carried out by Russian government hackers, the Washington Post reported on Saturday.

Trump said he had raised allegations of Russian interference in the 2016 U.S. presidential election with Putin.

“I strongly pressed President Putin twice about Russian meddling in our election. He vehemently denied it. I’ve already given my opinion…..”

He added: “We negotiated a ceasefire in parts of Syria which will save lives. Now it is time to move forward in working constructively with Russia!”

The United States, Russia and Jordan reached a ceasefire and “de-escalation agreement” for southwestern Syria on Friday, as Trump’s administration made its first attempt at peacemaking in the country’s six-year-old civil war.

The ceasefire was holding hours after it took effect on Sunday, a monitor and two rebel officials said.