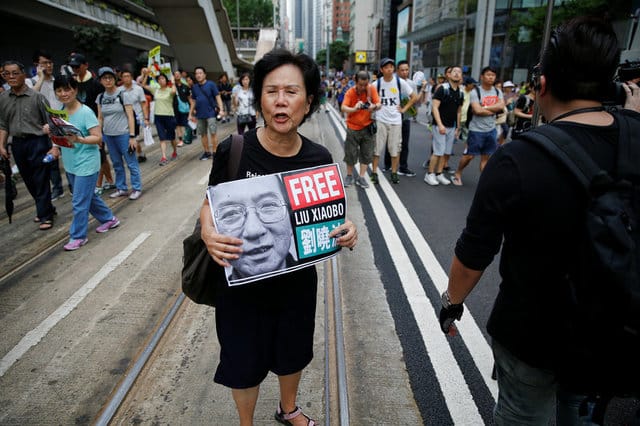 Liu, 61, was jailed for 11 years in 2009 for “inciting subversion of state power” after he helped write a petition known as “Charter 08” calling for sweeping political reforms.

He was recently moved from jail to a hospital in the city of Shenyang to be treated for late-stage liver cancer.

The hospital said in a short statement Liu was also suffering from kidney problems, and that in his condition, it was not appropriate to treat him with radiotherapy.

His family had been informed, it said.

Questions have arisen over the possibility of Liu getting treatment abroad, and if he wanted to go, and was fit enough to go, if authorities would let him leave.

Calls have grown from rights groups and Western governments for China to allow Liu to travel with his wife, Liu Xia, to be treated overseas.

A German and US doctor who visited Liu said on Sunday he could be moved abroad safely for treatment and he wanted to go to either Germany or the United States, but any move needed to happen soon.

They added that “additional options” may exist to treat him, including radiotherapy.

Asked on Monday at a daily news briefing whether China would allow Liu to go abroad for treatment, foreign ministry spokesman Geng Shuang said: “China hopes relevant countries will respect China’s sovereignty and will not use individual cases to interfere with China’s internal affairs.”

China has kept a tight control on information about Liu’s case, and has imposed tight security at the hospital.

The 23rd floor of building number 1 of the First Hospital of China Medical University in Shenyang, where friends of Liu say he is being treated, has been sealed off, with access only for patients or family members.

Friends have confirmed that Liu’s family have been able to visit him.

A man in plain clothes who identified himself as working for the hospital told a Reuters journalist who went to the floor to leave. Asked if Liu was being treated there, the man, whose ID badge identified him as Teng Zhi, said: “Regardless of whether he is here or not, you cannot go in unless you are a family member.”

Like many of the men who appeared to be guarding doors to the wards, Teng had a smiley face badge pinned to his T-shirt.

Similar badges have been worn by individuals who appear to be security agents at other events considered sensitive by the state, according to rights activists.

Police in plain clothes blocked a Reuters journalist from taking video of the hospital entrance. When asked if filming was not allowed because of Liu Xiaobo, they said: “Who’s that?”

The journalist was then escorted to was described as a “media centre” in a nearby hotel where a man, who only gave his last name Zhang, said no one at the hospital was available for an interview.

A couple of video clips of Liu have appeared on YouTube, which is blocked in China, since his sickness came to light and on Sunday, two new ones were posted in which two foreign men, apparently the German and US doctors, appeared to praise the quality of care Liu has received.

One clip showed Chinese doctors asking whether there was any better treatment possible for Liu, followed by a man, identified in text posted with the video as German doctor Markus Buechler, saying: “I don’t think we can do better in Germany.”

In another clip, Buechler was seen telling Liu’s wife that they considered their invitation a sign that Chinese doctors wanted to do their best to care for Liu.

The University of Texas MD Anderson Cancer Centre and the University of Heidelberg, where the two doctors work, did not immediately respond to requests for comment on the videos on Monday.