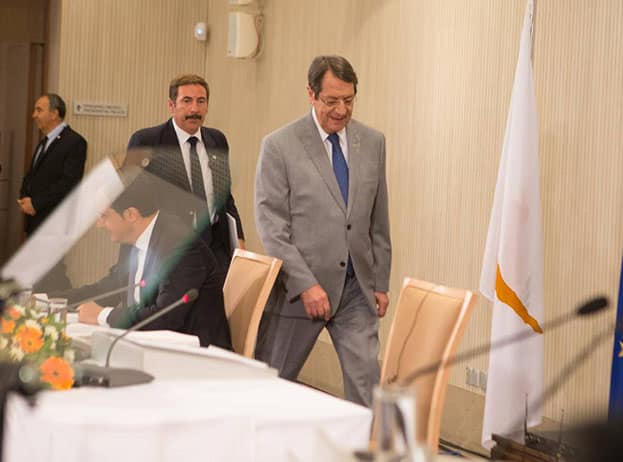 The Greek Cypriot side stands ready to negotiate a solution within the parameters set by the UN Secretary-General, President Nicos Anastasiades said on Monday in his first detailed statements following the collapse of the talks on Friday in Crans-Montana Switzerland.

During a televised news conference, he said the Greek Cypriot side would agree to negotiate if the Treaty of Guarantee and the Treaty of Alliance were terminated from the first day, along with the right of intervention, if an effective mechanism was found for implementing and monitoring the solution based on the comprehensive proposal that the Greek Cypriot side has tabled, and if a timetable for full withdrawal of Turkish troops is agreed.

“What I want to make absolutely clear … (is that) the Greek Cypriot side is ready to negotiate a solution within the parameters set by the United Nations Secretary General,” he said.

Anastasiades said the government, through its diplomatic officers in a number of countries in the coming days would be talking to the UN, the EU, Greece, and the National Council at home to chart the next steps.

He said the conference in Crans-Montana, had been closed by UN Secretary-General Antonio Guterres but not the talks process as a whole. “The intention of the Secretary-General was not to blame either side,” he said. Guterres did say the UN would facilitate a new initiative if the two sides wished.

“I want to say that I had many times warned that cultivating a very optimistic feeling was not for the best. I also warned on  October 6 that we were not adequately prepared to discuss territorial and guarantee issues thus we would create false expectations to the people and that would have a negative impact on the negotiations,” Anastasiades said.

Anastasiades said reports after the collapse that Turkey had been ready to give up its guarantee was not true and he also made reference to “malicious messages” that blamed the Greek Cypriot side for the failure.

He said he did not accept that any damage had been done to the Greek Cypriot side as its positions had been consistent and within the UN framework throughout.

He also said Turkish Cypriots must decide if they want to be part of a future Cyprus, or part of Turkey, with whom he said it was time to cut the umbilical cord.

“I want to reiterate that our goal and purpose through the proposals we have put forward is the creation of a truly independent and sovereign state, free from any third country dependency,” he said. “I want to tell Greek and Turkish Cypriots that we should unite and look at the prospects of independence, of true independence and integrity of the Republic of Cyprus as an EU member state which ensures the rights of all,”

He also said wanted to lay out the full facts of what happened in Crans-Montana.

Turkey also proposed its troops numbers be significantly withdrawn and then reduced to an agreed number, that implementation of the solution would be supervised by a committee bringing together a representative from Turkey, Britain and Greece, a Greek Cypriot and a Turkish Cypriot by the federal government one each from the constituent states, and a representative of the UN but excluding the EU.

“As was expected, both we and the Greek foreign Minister rejected the Turkish proposal,” said Anastasiades.

He said European Commission Vice-President Frans Timmermans, who was in Crans-Montana noted that the EU had a lot to contribute and could play a role in the security of an EU member state.

Anastasaides said, then, the UN invited the parties to answer three basic questions related to security and guarantees and he submitted answers in full while Turkey and the Turkish Cypriot side “limited themselves to repeating their positions”.

On June 30, during the first arrival of the UN Secretary-General, he said the parameters for the negotiations, which included a new security system and not a continuation of the old one, plus an end to unilateral rights of intervention, and an end to the Treaty of Guarantee. “Current guarantors are not able to implement and supervise themselves in the implementation of the solution,” Anastasiades said quoting from the parameters’ document.

As far as troops were concerned, there should be, according to the UN document, a drastic reduction of troops from the first day and then a reduction to 1960 levels while agreeing the timetable for withdrawal and surveillance mechanisms.

Regarding the termination (sunset) clause for troops against the review clause, this was to be discussed with the participation of the prime ministers of the three guarantor powers.

The remainder of the previously-published UN document focused on territory, property rights, power sharing and the treatment of Turkish nationals.

“As a result of the refusal of the Turkish side to negotiate within the parameters set by the Secretary-General and in view of a looming stalemate, I took the initiative and on July 5, under specific terms and conditions, I submitted proposals countering the concerns of Turkish Cypriots, without ignoring the sensitivities of the Greek Cypriot side,” said Anastasiades.

He added however that none of those proposals would apply if the guarantees and unilateral right of intervention were no terminated, if there was no withdrawal of troops with a specific timetable and if the legitimate demands of the Greek Cypriot side on territorial adjustments were not met, the president said.

“The proposals received positive response from the participants, except, of course, Turkey and the Turkish Cypriots,” he added.

Anastasiades said that when the UNSG arrived back in Crans-Montana on July 6, the Turkish side let it be understood that it would display flexibility within the parameters established regarding the intervention rights and the abolition of guarantees.

He said then, “with a deadlock looming”, the Secretary-General took the initiative to propose a brief statement of generally-accepted positions on security and guarantees as well as on some other chapters where he considered it possible to reach consensus.

When he himself repeated the same question to Cavusoglu as the Greek foreign minister had, as to whether the termination of the guarantees and right of intervention would apply from the first day, he said the Turkish foreign minister’s evasiveness had revealed that Turkey’s position remained unchanged.

These were that the guarantees and intervention rights should be maintained with a review clause of 15 years, while the issue of troop, “the absolute position of Turkey was that the number agreed would remain permanently in Cyprus”.

Anastasiades said the Secretary-General “to avoid exacerbating the crisis, assumed the burden of responsibility” stating that there had been a misconception from his consultations with the Turkish foreign minister. In addition, he added the Turkish side was only proposing to return part of Morphou.

Responding to a question regarding the optimism created by the United Nations and other circles about the outcome of efforts and asked to comment on Akel statements that an impression had been given that the president could have done more than what he did at the conference, Anastasiades said he would not comment but respected the right of political leaders to make statements.

A musical tribute in the garden