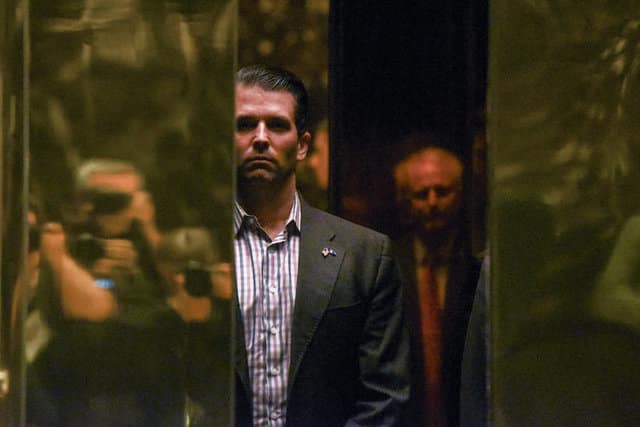 President Donald Trump’s son, Donald Trump Jr., agreed to meet with a Kremlin-linked lawyer during the 2016 election campaign after being promised damaging information about Hillary Clinton, the New York Times reported on Sunday, citing three advisers to the White House.

In a statement quoted by the Times and later made available to Reuters and other media outlets, Donald Trump Jr. acknowledged meeting with Russian lawyer Natalia Veselnitskaya.

“After pleasantries were exchanged, the woman stated that she had information that individuals connected to Russia were funding the Democratic National Committee and supporting Ms. Clinton,” the statement said. Clinton was the 2016 Democratic presidential nominee.

“Her statements were vague, ambiguous and made no sense. No details or supporting information was provided or even offered. It quickly became clear that she had no meaningful information.”

Trump Jr. said Veselnitskaya then turned the conversation to the adoption of Russian children and a U.S. law blackisting Russians linked to alleged human-rights abuses.

President Trump was “not aware of and did not attend” the meeting, Mark Corallo, a spokesman for Trump’s legal team, said in an emailed statement.

Trump Jr. said he was asked to attend the meeting “with an individual who I was told might have information helpful to the campaign” at the request of an acquaintance he knew from the 2013 Miss Universe pageant.

“I asked Jared and Paul to attend, but told them nothing of the substance,” he said.

“The meeting lasted approximately 20 to 30 minutes,” he said. “As it ended, my acquaintance apologized for taking up our time. That was the end of it and there was no further contact or follow-up of any kind. My father knew nothing of the meeting or these events.”

The New York Times report said Trump Jr. was promised damaging information about Clinton before agreeing to meet with the lawyer. It cited three advisers to the White House briefed on the meeting and two others with knowledge of it.

The Times first reported on the meeting on Saturday, after which Trump Jr. issued a statement confirming that it took place, but made no mention of the Clinton aspect.

Representatives for Manafort and Kushner did not respond to requests for comment.

Allegations of the Trump campaign’s ties to Russia have cast a shadow over Donald Trump’s first five months in office.

A federal special counsel and several congressional committees are investigating possible contacts between the campaign and Russian representatives as part of a larger probe into allegations that Moscow meddled in the election.

The June meeting was the first confirmed private meeting between members of the president’s inner circle and a Russian national, the Times reported, citing confidential government records and interviews with people familiar with the documents.

The revelations come after President Trump and Russian President Vladimir Putin discussed the allegations of election meddling during the summit of leaders from the Group of 20 major economies in Hamburg, Germany.

The Kremlin has denied U.S. intelligence agencies’ conclusion that Moscow tried to tilt the election in Trump’s favor, using such means as hacking into the emails of senior Democrats.

Trump has repeatedly denied any collusion.