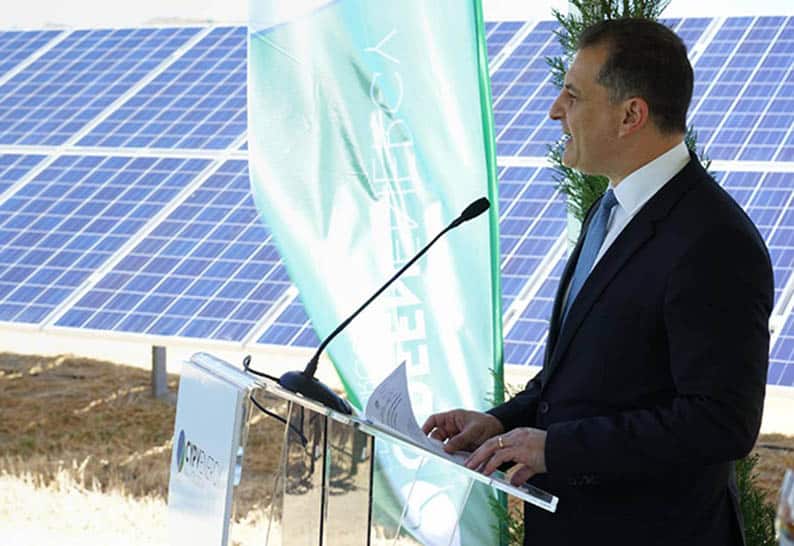 New technologies and plunging installation costs should mean an extension of wind and solar power production, but developments depend on the government which has committed to produce 13 per cent of Cyprus’ energy needs through renewable energy sources (RES) by 2020.

Current RES production is around nine per cent.

Cyprus’ 13 per cent target is part of the EU’s renewable energy directive which sets a binding commitment by member states of an overall 20 per cent energy consumption from renewable sources by 2020. To achieve this, EU countries have committed to reaching their own national renewables targets ranging from 10 per cent in Malta to 49 per cent in Sweden.

Wind power was a controversial early winner in the development of RES in Cyprus and there are now six wind farms with a combined capacity of 157.5 megawatts (MW), but the government’s more recent focus has been on significantly expanding photo voltaic production.

Wind farms have tended to be dismissed as an answer to Cyprus’ RES needs on the grounds that there simply is not enough wind in Cyprus to make it viable, while there is certainly no shortage of sun.

Akis Ellinas, president of the Cyprus Wind Association and owner of a wind farm in Paphos disagrees. “The problem is the government policy. They promote solar power. There are more incentives, for example net metering,” he said.

“The wind turbines which are used now operate with very little wind and are doing fine. The government has no vision. They have done nothing and it’s a big problem.”

Though solar power is slightly cheaper, as new technology has driven prices to drop, there is one big advantage when it comes to wind power.

“You need a lot more land for photovoltaics,” Sylvia Trabert, managing director at wind farm developer Wincono said. “For an installation of one megawatt with wind power an area of 400 square metres is needed, but to produce the same amount of electricity with solar power 20,000 square metres.”

This, she said, is fine as long as photovoltaics are installed on the roofs of big buildings but is more problematic when it comes to land in a small country like Cyprus. Land prices are high, and the land used for this purpose cannot be in some remote area but has to have a grid connection, which limits the possibilities further.

One academic has an idea how those big buildings could be put to good use. Sitting outside a café during our conversation, Alexandros Charalambides from the department of environmental science and technology at the Cyprus University of Technology pointed at some flat roofs on the other side of the road.

“It is possible to rent solar PV systems,” he explained. “Somebody who is not sure if they will use their roof in future for example to build on top, or who might move out can rent the space for a while to a company who then installs the system, looks after it and removes it when the house owner decides.”

The unpredictability and difficulty in storing electricity produced by solar and wind power were until recently the main reasons limiting RES production.  Output for solar power depended on cloud coverage, albeit not a big problem in Cyprus where there are not that many. Worse was the wind power’s unpredictability due to the fluctuations.

Both now have technological solutions. In addition to solar panels there is now concentrated solar power, where sun rays are directed towards solar towers by mirrors.

The towers can store energy for times when it is not sunny which eliminates fluctuation in the production, and there are also technologies to store energy from wind power.

It is now up to the government to encourage these increasingly cheaper renewables. As a recent report by the auditor-general made clear, the old system of subsidies was deemed too expensive and poorly planned. A new one has now been devised, but this leaves a vacuum for the time being.

In the past, contracts with fixed prices were made for 20 years. The subsidies are, in part, funded by a ‘green tax’ of 1 cent per kilowatt-hour (kWh) on electricity consumption, collected by the state-owned Electricity Authority (EAC) and paid into the state’s RES fund. The rest of the subsidy is financed by the EAC in the form of its ‘avoidance cost’, which is basically what it costs the power company to produce a kWh in any given month. The lower the EAC’s cost of production (that is, the avoidance cost), the more strain is placed on the RES fund. Lower oil prices in recent years have meant that the avoidance cost is now lower – as are electricity bills – and the expenses of the RES fund to pay for the difference are higher.

The new system will be in place in 2019, Trabert said.

All new producers who are not already covered by the long-term contracts or whose contracts run out, conventional and renewable, will have to use a system which is comprised of a day-ahead market, where a contract is made between seller and buyer for the delivery of power the following day, with a price being set much like at an auction, and a forward-market system, where again a price is announced the day before production but producers don’t have to take part in the bidding. Instead they enter a contract with fixed tariffs with the buyer.

For now, there are no new contracts but this will likely change when a transitional regulation allowing for some contracts is implemented in September.

However, current government plans are to support solar energy as far as they support any renewable energy at all. While the nation’s renewable energy action plan, a plan on how to achieve the 13 per cent share of renewables by 2020, has a provision of 300 megawatts for wind power, current plans are for a maximum of 175, just 17.5 megawatts more than the current capacity, with no growth planned for until 2050.

The figures for solar are not that clearly definable. “The figure changes every month,” George Partasides, coordinatior for renewable energy at the energy ministry said. “It should be around 90 megawatts at the moment.”

There are now around 50 companies with are involved with solar power, but if the government gets its way, there will soon be more. “We are planning for 250 megawatts by 2020,” Partasides explained, “mainly by solar power.”

He insists the huge amount of land needed for solar installations is not a major drawback, as areas used for this purpose have been declared unfit for other uses such as agriculture; and each time a permit is given an environmental study is carried out beforehand.

Though at the moment there are no direct subsidies, the government supports the photovoltaic systems, though it remains to be seen if this is enough.

“We are in favour of photovoltaics and have indicated this to Cera [The Cyprus Energy Regulatory Authority], the finance ministry and the town planning department,” he said. “They have guidelines to take in account the national action plan and encourage the programme.”

“Every year we support a new scheme, at the moment we give some subsidies only to vulnerable groups while we encourage the others to use the energy they produce. The electricity authority is obliged to support this,” Partasides added.

The scheme for this year started on June 6 and it will run for a year before new decisions will be announced or until the total power of 23 MW set aside for this project is reached. It is a continuation of last year’s project when the power limit was 20 MW.

Of the 23 MW, 1.2 are designed to go to low-income and other vulnerable groups such as disabled people. This covers the need of around 400 households. According to the amount of power they apply for, a person belonging to this group can get a subsidy of up to €2,700.

Another 8.8 MW go to other households which are not subsidised, 10 MW to commercial and industrial buildings, two MW to agriculture and one MW is earmarked for public schools.

Though the ministry’s energy department doesn’t think in terms of renting space on the top of buildings, at least not yet, it does encourage big companies to support solar power by allowing a nearly unlimited use of their buildings’ roofs for solar panels.

Encouraging solar power is also a move to create jobs. Partasides estimates there are five to ten employees working at a wind farm, totalling up to 60 people at them all. The 50 companies dealing with solar parks, meanwhile, employ around 200.

The question remains whether the government can reach their targets without handing out expensive subsidies and whether it should keep its options open by supporting wind power, which currently produces most of the renewable energy, as well as solar power.

The European Commission during in recent years has already referred Cyprus to the Court of Justice of the European Union for failing to transpose the Renewable Energy Directive, so the government is under pressure to move decisively in the right direction to drastically increase the use of renewables.