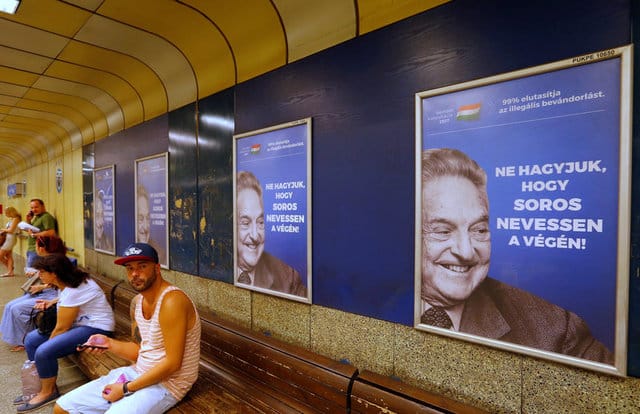 An anti-migrant billboard campaign by the Hungarian government that uses the image of US financier George Soros is “reminiscent of Europe’s darkest hours”, Soros’ spokesman said on Tuesday.

The billboards and full-page media ads that have appeared across Hungary depict a smiling Soros – a vocal critic of Prime Minister Viktor Orban‘s right-wing government – and the caption: “Don’t let Soros have the last laugh.”

Some Soros billboards have been defaced with graffiti that reads “stinking Jew”. Soros, 86, is a Hungarian Jew who emigrated after World War Two, made his fortune in the United States and has long supported groups promoting liberal, democratic and open-border values in eastern Europe.

Michael Vachon, spokesperson for Soros, condemned the billboard campaign as “anti-European” and said it also misrepresented the financier’s views on migration.

“The Hungarian regime’s xenophobia and demonization of refugees are anti-European.”

Orban, a right-wing nationalist, has often clashed with the European Union in the past, most recently over his clampdown on foreign-funded NGOs.

The Federation of Hungarian Jewish Federations (Mazsihisz) has urged Orban to halt the campaign.

“This campaign, while not openly anti-Semitic, clearly has the potential to ignite uncontrolled emotions, including anti-Semitism,” they said.

In a reply to Mazsihisz, Orban said that it was his duty to protect Hungarians – including the country’s 100,000-strong Jewish community – from illegal migration.

“The person who uses his wealth, power, influence and a network of non-governmental organisations (NGOs) funded by him to settle millions of migrants in Hungary and the European Union puts our future in jeopardy,” Orban said in a letter posted by state news agency MTI late on Friday.

“The billionaire speculator George Soros has made it quite clear repeatedly that this is precisely what he wants to do.”

Vachon said the claim that Soros was promoting a scheme to import millions of illegal immigrants into Europe was “fantasy.”

“Soros’s actual position on migration is that the international community should provide more support to the developing countries that today host 89 per cent of refugees and that Europe should accept several hundred thousand fully screened refugees through an orderly process of vetting and resettlement,” he said.

Orban‘s government fortified Hungary’s southern border in 2015 against a large influx of migrants from the Middle East and Africa into the EU that year.

He has also rejected a quota scheme agreed by European Union leaders to distribute migrants among member states and has repeatedly depicted the mostly Muslim migrants and refugees as a threat to Europe’s Christian identity and culture.

Orban‘s government has strongly denied that the billboard campaign has anything to do with anti-Semitism.

Orban, who faces a national election in April 2018, has long proclaimed zero tolerance for anti-Semitism, though he has more recently risked angering Jews with remarks apparently meant to court far-right voters.

Around 100,000 Jews live in Hungary today, down from more than half a million before the Holocaust.

‘Turkey never intended to commit to a Cyprus solution’ (updated)