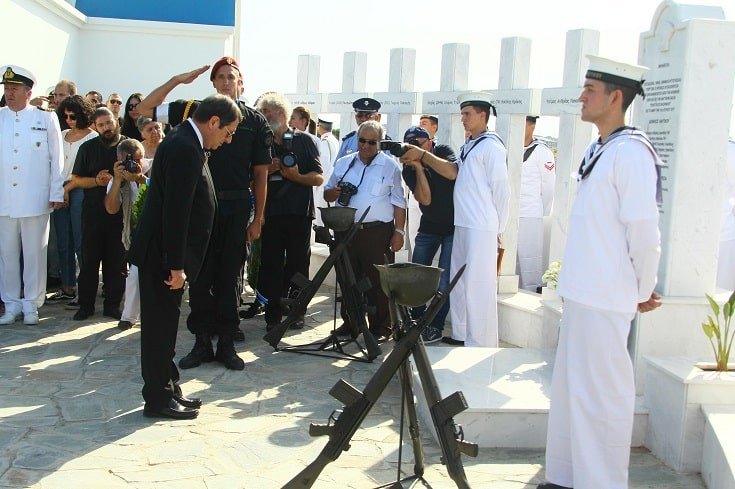 July 11, 2011 is one of the darkest days in the modern history of the island, President Nicos Anastasiades said on Tuesday at a memorial service in Mari, marking the 6th anniversary of the deadly blast that killed 13 men at the Evangelos Florakis naval base.

The president attended the prayer carried out by Limassol Bishop Athanasios at the chapel built at the site of the explosion.

The ceremony was attended by two ministers, the House speaker, the Greek ambassador, political leaders, the leadership of the National Guard, Eldyk, and Fire Service as well as local government officials and relatives of the victims.

In his address, Anastasiades said that it was the government’s duty to honour and show gratitude to the 13 men who “went beyond the call of duty”.

Seven sailors and six firemen died on July 11, 2011 in a blast caused by munitions haphazardly stored in containers at the Evangelos Florakis naval base. The munitions, stored in 98 containers, were confiscated in 2009 from a Cyprus-flagged ship on route to Syria. They were then stacked in an open space at the base and left exposed to the elements until the day of the explosion, despite repeated warnings about the risks.

“It our duty to bestow the due honour to people who sacrificed their lives while on duty,” Anastasiades said.

The 13 men, he said, staying true to their oath to serve their country, defended the lives and property of the citizens of the country.

Implicitly criticising the Demetris Christofias administration regarding the way it had handled the matter, Anastasiades said that the “13 heroes of the Mari tragedy, putting the public interest and the love for their homeland above their lives, defended the social cohesion of this state by being burdened with responsibilities, political and administrative, they had nothing to with”.

He added that the sense of their loss becomes more intense since it concerns an act of self-denial while on duty. The 13, he said, were “victims of state negligence”.

Following the explosion there was public outcry calling for the resignation of the president Christofias, who washed his hands of the disaster, despite an independent investigator – whom he appointed – apportioning a large share of the responsibility to him and suggesting his prosecution.

The state, Anastasiades said, felt it has an obligation to provide for the families of the 13 victims. Apart from financial assistance, it had also established a committee for giving support to these families.

“As a government, we will continue to be on the side of the families of the victims, and (offer) constant and practical support as the minimum obligation and recognition of the sacrifice of their people for the homeland,” Anastasiades said.

He reassured the relatives of the victims that their loved-ones’ sacrifice earned them a spot “in the pantheon of heroes”. The government has declared the 13 men as heroes, Anastasiades said, which is the least it could do as a tribute to their sacrifice.

The government will work tirelessly, he said, to introduce reforms to avoid similar incidents from taking place ever again.

Later in the day the Fire Service is organising a blood donation and a photo exhibition in Kofinou, in honour of the killed firemen.

Cult actress with a sense of purpose