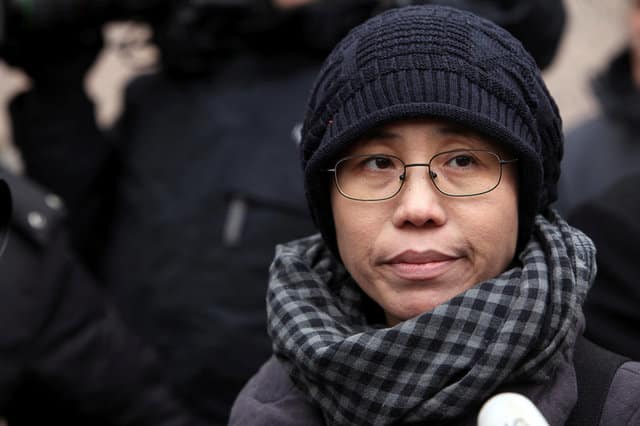 Liu Xia, the wife of Chinese dissident Liu Xiaobo, talks to the media in Beijing February 11, 2010

Friends of China’s Nobel Peace Prize-winning dissident Liu Xiaobo, who died of liver cancer in custody, said on Friday they are still unable to contact his widow, Liu Xia, and that ensuring her freedom is now a top priority.

Liu Xiaobo, 61, was jailed for 11 years in 2009 for “inciting subversion of state power” after he helped write a petition known as ‘Charter 08’ calling for sweeping political reforms.

Liu Xia has been under effective house arrest since her husband won the Nobel Peace Prize in 2010 and was allowed to visit him in prison about once a month. She suffers from depression.

Liu Xiaobo died on Thursday after suffering multiple organ failure. He was recently moved from jail to a hospital in the northeastern city of Shenyang to be treated for late-stage liver cancer.

Rights groups and Western governments have mourned Liu Xiaobo’s death and also called for Chinese authorities to allow his wife and the rest of his family to move around freely.

Australian Foreign Minister Julie Bishop urged China to lift curbs on the movement of Liu Xia, in a statement sent to Reuters on Friday.

China, however, said the case remained an internal matter.

“The handling of Liu Xiaobo’s case belongs to China’s domestic affairs, and foreign countries are in no position to make improper remarks,” China’s foreign ministry spokesman Geng Shuang said in a statement sent to Reuters.

“We call on relevant countries to respect China’s judicial sovereignty and not to meddle in China’s domestic affairs with this individual case,” he said.

“Now, we are most concerned about Liu Xia, but there has been no information about her. She is at this moment the person who is suffering most,” Hu said.

“All the willpower and force we put behind freeing Liu Xiaobo, we have turned to Liu Xia,” he said, urging the United States and Germany to continue pressuring China to free Liu Xia.

Efforts should also focus on Liu Hui, the younger brother of Liu Xia, who was sentenced to 11 years in prison in 2013 for fraud and to whom Liu Xia is very close, Hu said.

Several other family friends confirmed they were still unable to contact Liu Xia or family members to confirm her whereabouts.

Taiwan-based Wu’er Kaixi, a leading figure in China’s 1989 pro-democracy movement who knewLiu, made a plea to world leaders to suspend official interactions with China until Liu Xia was released.

“You failed to help him to receive his last wish, which is freedom and medical treatment he deserved. Please, do not fail again to save Liu Xia.”

A video clip of Liu Xiaobo’s treatment was released by the Shenyang justice department on Friday, the latest in a series issued by authorities who say he was well cared for in hospital.

It emphasized that Liu Xiaobo’s family had a history of liver cancer and that Liu Xia and his family were involved in the treatment process and kept abreast of developments.

Friends have also begun calling to be allowed to participate in Liu Xiaobo’s funeral arrangements and support his wife and family.

More than 150 friends and supporters, including some of China’s most prominent dissidents, rights lawyers and intellectuals, have also signed an open letter announcing plans for an “online memorial” to Liu.

Signatories have urged authorities to release Liu‘s body and allow an open funeral by his family and friends.

“We will pay close attention to how Liu Xiaobo’s funeral will be arranged,” said Shanghai-based writer Wen Kejian, another friend of the family.

“We, at the very least, hope to have the opportunity to go to Shenyang or Beijing to send him off.”

Rights lawyer Chen Jinxue added, “Normally if someone has passed, the right to deal with the body lies with the family.”

Liu‘s remains were taken to Shenyang’s Xiheyuan funeral parlour, a source close to the family said, but surrounding roads had been blocked off when a Reuters reporter tried to visit on Friday.

Local authorities forced half-a-dozen supporters of Liu who went to Shenyang to pay their respects to leave, or detained them, said Beijing-based rights activist Li Yu, who is tracking the cases.

But censors were swift to act. Even an article titled, “Speaking of heroes, who is a hero?” from respected business publication Caixin was taken down after being shared by many of LiuXiaobo’s supporters, despite making no mention of him.

Searches and postings of images and emojis of candles, as well as the word itself, were also blocked on Weibo, China’s equivalent of Twitter.

“Tonight we will let you have the floor,” the state-backed Global Times tabloid said in a social media post that appeared to mock the mourners.

“The deceased has gone, the feigned sorrow is really preposterous. We will just eat watermelon and watch for the night.”

Ye Du, a writer and friend of Liu‘s, said he hoped people would be able to commemorate LiuXiaobo, despite harsh government restrictions.

“Liu Xia will surely be monitored and controlled,” he added. “Grieving in reality will certainly also be strictly controlled, but there will definitely be lots of people who will use all sorts of ways to mourn.”