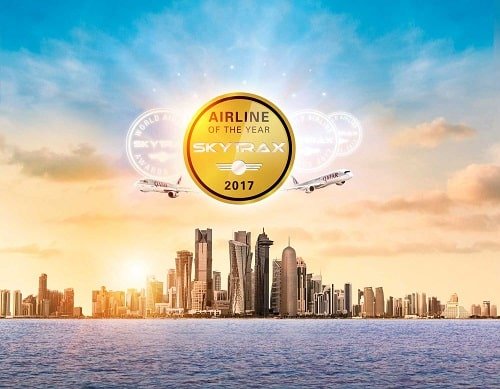 Qatar Airways is celebrating winning the Skytrax “World’s Best Airline” award by offering passengers up to 40 per cent off on flights to popular holiday destinations across its growing global network, as part of its ‘Fly with the World’s Best Airline’ global sales campaign launched this week.

Passengers can now take advantage of special discounts on fares to a host of popular holiday destinations, including its recently launched routes to Nice, France and Dublin, Republic of Ireland, as well as many other destinations on the airline’s growing global network that now spans six continents.

Qatar Airways Chief Commercial Officer Mr. Ehab Amin said: “We are tremendously proud to have been named World’s Best Airline, in addition to having been awarded the titles of World’s Best Business Class, Best Airline in the Middle East, and World’s Best First Class Airline Lounge. We are delighted to celebrate these great wins with our passengers from all over the world, and we hope this unique offer will allow them to experience our renowned, world-class service on our rapidly-expanding global network.”

Until 19 July, passengers will be able to book special fares from Larnaca to Sydney (starting from €920), Bali (starting from €770), Phuket (from €750) and Miami (from €700) for travel until 10 December 2017. Additionally, Qatar Airways Privilege Club members will enjoy double Qmiles when they book on qatarairways.com.

The airline has maintained its position at the forefront of international air travel with the introduction of a game-changing, patented new Business Class seat, set to transform the face of aviation and Business Class travel: “Qsuite.” Qsuite features the industry’s first-ever double bed available in Business Class, with privacy panels that stow away, allowing passengers in adjoining seats to create their own private room.

Adjustable panels and movable TV monitors on the centre four seats allow colleagues, friends or families travelling together to transform their space into a private suite, allowing them to work, dine and socialise together. These new features provide the ultimate customisable travel experience that enables passengers to create an environment that suits their own unique needs.

With a rapidly growing network and a modern fleet of 200 aircraft, the airline will expand its global destinations in 2017-18, adding Sarajevo, Bosnia and Herzegovina; Kiev, Ukraine and many more exciting new destinations.

The cast of ‘Jersey Shore’ are reuniting for a TV special