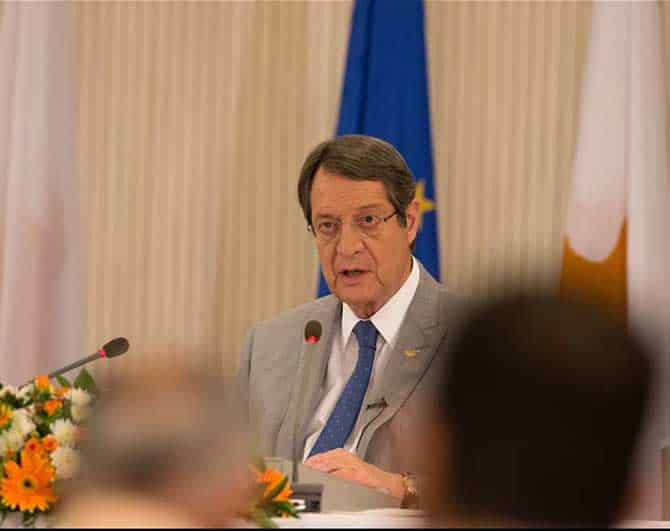 Anastasiades said he will issue a full statement on Thursday

President Nicos Anastasiades is convinced the correct strategy was followed by the Greek Cypriot side in Crans-Montana, he was quoted as saying in an interview with To Vima on Sunday.

In another interview with Kathimerini, he said Turkey had not been prepared to take the necessary steps on Cyprus before seeing results from its own negotiations with the EU.

He also said the Turkey-EU process would act as an incentive for Ankara for a new start to the talks, which were just interrupted, not ended, he said.

On UN Special Adviser Espen Barth Eide, Anastasiades criticised him for lack of preparation and said the envoy, although acting in good faith was “living in an illusion that almost everything was solved”, and was not clearly conveying the messages being received from Ankara.

“He should have conveyed exactly the messages he was receiving, especially from Ankara,” he said.

Eide’s other mistake was misconstruing what he wanted to happen with what was actually happening.

Anastasiades said he had told Eide, and Turkish Cypriot leader Mustafa Akinci that moves without proper preparation of the issues, especially on security and guarantees would lead on one hand to increased expectations and on the other hand to certain failure.

Anastasiades said the correct strategy had been followed by the Greek Cypriot side in Switzerland.

“Our proposal was clear and it was shared by the Greek government: the removal of guarantees and rights of intervention and simultaneously create mechanisms and monitoring for a solution where there would be safeguards for the security of Greek Cypriots and Turkish Cypriots,” he said.

Even the UN Secretary General, Antonio Guterres, had received an incorrect impression from Turkey due to mixed signals from Turkish Foreign Minister Mevlut Cavusoglu.

According to reports from Crans-Montana about what took place at the last dinner on Friday July 7, Cavusoglu had signalled to Guterres in private that Turkey was willing to drop the guarantees and intervention rights from the first day but it wanted a small troop presence, to be reviewed in 15 years.

The Turkish side says when Anastasiades was presented with the proposal at dinner he fell back on his ‘zero troops’ and ‘zero guarantees’ position.

The Greek Cypriot side says that when asked to put its proposals in writing about abolishing the guarantees and intervention rights, Cavusoglu had refused and appeared to backtrack on what he supposedly told Guterres in private. Anastasiades said last Monday, there had been a miscommunication between the two about what Turkey had been prepared to concede.

He said in the Kathimerini interview on Sunday he was ready to go back to the dialogue “if there is good preparation”.

Regarding the proposals submitted in Crans-Montana, Anastasiades said they were still on the table. As far as the rotating presidency was concerned, he said he made it clear that it could be accepted under certain conditions.

He also expressed full confidence in the Greek government and foreign minister Nicos Kotzias who is due in Cyprus Monday to attend two days of the National Council. Anastasiades said Kotzias had been one of the more positive of the conference participants. Eide is due to brief the UN Security Council on the Crans-Montana talks on Tuesday in New York.

Commenting on the provocations from the Turkish side over drilling in Cyprus’ exclusive economic zone (EEZ), Anastasiades said the government had taken a number of preventive legal measures. Turkey has sent a frigate to monitor the activities of the drillship West Capella acting on behalf of French giant Total.

Asked to comment on the possibility of gas pipeline linking Turkey with Israel, which would have to go through the island’s EEZ, Anastasiades said that although Cyprus could not veto this, there were other ways that would ensure the government’s permission would be needed for it to go ahead such as rights relating to the environment or future plans of the Republic.

Meanwhile French Defence Minister Florence Parly is due in Cyprus on Monday for a meeting with his Cypriot counterpart Christoforos Fokaides as part of his visit to two French frigates in the region that are participating in the UN peacekeeping force in Lebanon Unifil. Paris is also closely monitoring developments related to Total’s drilling activities.

Australia says MH17 perpetrators may be tried in absentia