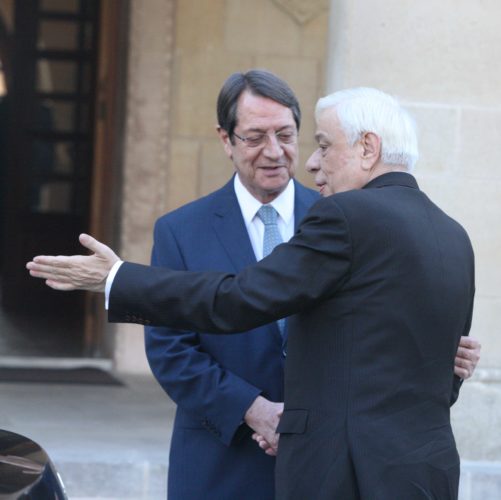 Greece is striving for a just and viable solution to the Cyprus issue as soon as possible but could not accept anything short of full sovereignty for the island, Greek President Prokopis Pavlopoulos said on Sunday, according to the Athens-Macedonia press agency (ANA-MPA).

He said Greece was also ready to fully defend its borders, territorial integrity and sovereignty, the report said, adding that Greece’s borders were also EU borders.

“The Cyprus Republic, as a full member of the EU, cannot conceivably have a limited sovereignty, as would result from occupation troops and anachronistic third-party guarantees,” he said.

Pavlopoulos said this would be contrary to international and European law. He added that it would also create a dangerous and possibly disastrous precedent for the sovereignty of every EU member-state, the agency report said.

On Greco-Turkish relations, Pavlopoulos said Greece will not make any concessions when it came to Turkey having to implement EU laws and practices.

“Setting as an inviolable term the self-evident need for full respect and unremitting adherence of European and international law in its entirety, our country strives with actions to develop close ties of good neighbourhood and sincere friendship with Turkey. And it is prepared to offer its active support to Turkey’s rapprochement with the EU,” he said.

Students encouraged to volunteer this summer