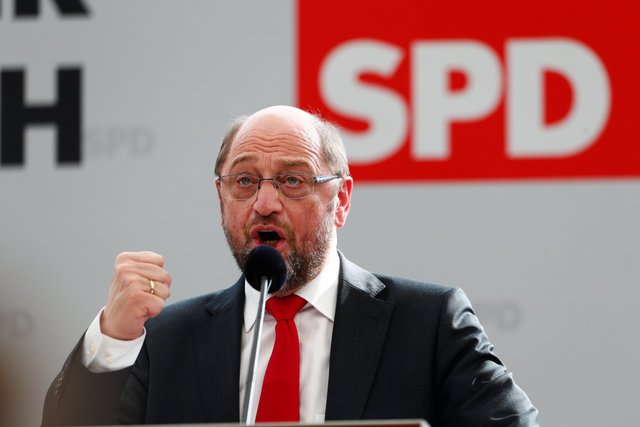 Schulz, the former European Parliament President, is hoping to beat Merkel in a Sept. 24 election but his centre-left Social Democrats (SPD) have lost momentum in the polls after initial gains following his nomination in January.

Presenting a 10-point plan for a modern Germany and a better Europe, Schulz told supporters in Berlin that he would compel the state to raise spending on infrastructure and education.

“Germany can do more,” Schulz said.

“If we do not invest heavily in research and development, in electric vehicles and energy-saving production processes, we’ll fall behind,” Schulz said, adding that Europe’s largest economy was being challenged by countries where the state owned or subsidised firms.

Such an investment push would cost “a lot of money”, Schulz said but it would be better to spend the country’s budget surplus that way than wasting it by promising voters tax cuts — a clear dig at Merkel’s conservatives.

Schulz said he was in favour of sticking to Germany’s fiscal rules, also known as the debt brake, but he added: “In addition to the debt brake, we need a minimum level of investment that preserves the substance of our country and makes it sustainable.”

Schulz gave no specific figures but has previously said he wanted to boost investment by 30 billion euros ($34.4 billion) over the next four years to improve schools and other amenities.

Merkel’s conservatives and the SPD currently govern in a grand coalition but Schulz is not a minister.

Turning to Merkel, the SPD leader accused the chancellor of “boastfully promising” full employment while not telling voters how she wanted to achieve this.

“If you want to be a state leader in Europe, you must acquire the trust of the peoples,” Schulz said.

“And that’s why for me it is a complete scandal when the chancellor says: ‘We have big plans for Europe, but we’ll only tell you after the election’.”

Schulz said he backed French President Emmanuel Macron’s proposals for a joint euro zone budget to boost investment, adding Germany should also be prepared to increase its financial contribution to the bloc’s first post-Brexit budget after 2019.

Germany already makes the largest net contribution to the EU budget at around 15 billion euros each year.

Schulz pointed out that Poland and Hungary were among the countries that are the biggest net recipients of the EU budget, but both rejected taking in refugees as demanded by a jointly agreed EU deal to share the burden of the migration crisis.

“Solidarity is not a one-way street,” Schulz warned, calling for financial sanctions for those countries that violate the spirit of solidarity in the EU.

‘Family court needs to be faster and fairer’