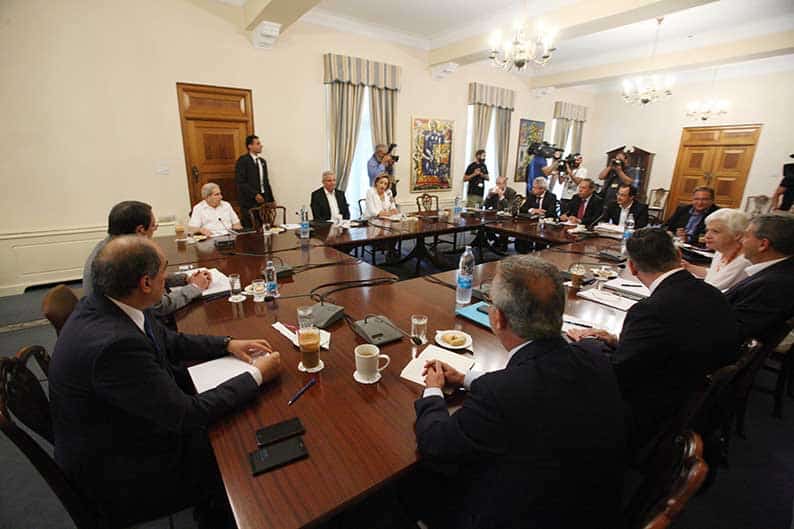 THE NATIONAL Council meets tomorrow to discuss the next moves after the collapse of the conference on Cyprus. ‘What next’ will be the subject of the meeting that on Tuesday will have Greece’s foreign minister Nikos Kotzias as a special guest, supposedly to help President Anastasiades and the party leaders make decisions about the Cyprus problem. It is interesting that Kotzias will be present, as his contributions to the two conferences on Cyprus have not proved very helpful to the efforts to reach a compromise.

Before the first conference, he declared that Greece would attend only on condition that guarantees were abolished and all Turkish troops withdrawn. He eventually attended, but the conference ended prematurely, because Kotzias who had managed to fall out with the UN Secretary-General was not ready to discuss the details of security and guarantees and sought a meeting of technocrats to bash out the details; it was granted. In Crans-Montana Kotzias’ zero guarantees, zero troops doctrine became Anastasiades’ position, from which he was not prepared to budge.

This has now become the official position of the government. In his televised address on Monday night, Anastasiades said he would agree to negotiate only if the Treaty of Guarantee and the Treaty of Alliance were abolished from the first day of a settlement; there also had to be a timeframe for full withdrawal of Turkish troops. This was similar to the conditions set by the Diko leader Nikolas Papadopoulos, before the conference, the only difference being the timing. Papadopoulos wanted guarantees abolished and troops withdrawn before the referendum on a settlement was held.

Having embraced the Kotzias doctrine, which precludes the resumption of talks, what will the National Council be discussing tomorrow and Tuesday? Presumably, the ‘new strategy’ that is a slogan without substance, repeated ad nauseam by the rejectionist parties, as an allegedly viable alternative to the negotiations. Giorgos Lillikas, the leader of the Citizens Allaince submitted his old proposals for a new strategy at last Monday’s meeting, while Diko had released its proposals before the conference, but had not submitted them to the National Council. It will probably do so tomorrow.

These proposals are nothing new or original. In fact, they have been used for the last 30 years without any real practical benefit for the Greek Cypriot side. They are based on the premise that we should raise the political and economic cost of the continuing occupation for Turkey. This, their simplistic theory says, would force the Turks to pull out of Cyprus. They ignore the fact that the Republic’s policy of the last 40 years had been exclusively focused on creating a political cost for Turkey. All that we achieved was to block the opening of some chapters in Turkey’s EU accession negotiations, but it did not have a big cost on Turkey.

Even the non-recognition of the north, the one and only objective of our foreign policy, is the result of powerful states not wanting it to happen rather than through our efforts. This brings us to the other simplistic tenet of our new strategy – the forging of strategic alliances with neighbouring countries to counter Turkish might by changing the balance of power. This is another simplistic theory that completely ignores our tiny size. What country, even in the region would opt to have relations with country of less than a million people that is both economically and militarily irrelevant?

The interests of the big powers – the US, the EU and principled Russia – are best served by good relations with Turkey, as they have all proved time and again. The fantasy that we would forge an alliance with Israel, as a counter to Turkey, was exposed again this week when it was announced that Tel Aviv was on the verge of signing an agreement for building a pipeline to take its natural gas to Turkey, via the Cypriot EEZ.

What the National Council should be discussing tomorrow, if they could break with the traditional habit of offering false hope to people, is not a new strategy but the new target, now that negotiations on bi-zonal, bi-communal federation has been all but ruled out, by our new zero guarantees, zero troops doctrine that the Turks refuse to discuss. Under the new conditions, the only target left is an agreement on partition, which could also be negotiated by the two sides. Perhaps we could secure the return of some territory, come to an agreement on the exploitation of natural gas that would allow the pursuit of our energy plans without the uncertainty caused by Turkey’s threats and sign a friendship/co-operation agreement with the north. Such a deal would also be easier to sell to Greek Cypriots, the majority of whom are opposed to BBF and power-sharing with Turkish Cypriots.

This is a realistic and achievable target, which the National Council should be discussing tomorrow, but we suspect our party leaders will stick to the tradition of setting unattainable targets and offering false hopes via the new strategy.

Tales from the Coffeeshop: When is a Greek not a Greek?