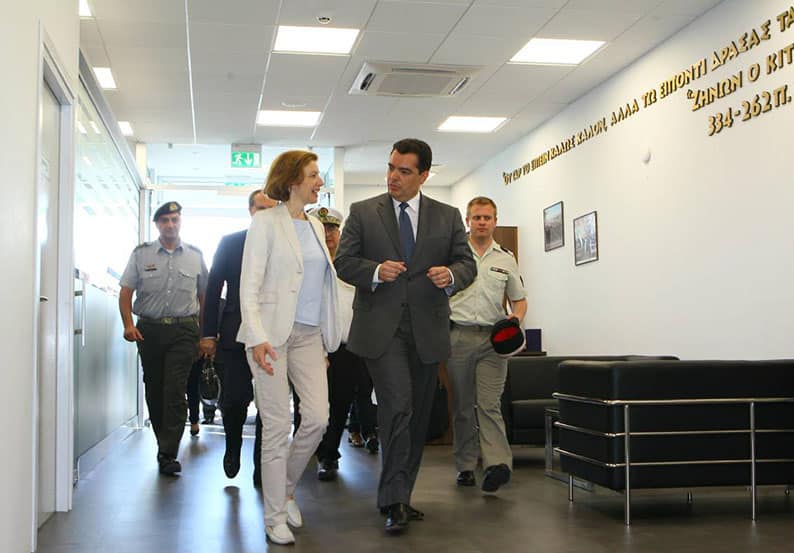 French Minister for Armed Forces Florence Parly in Larnaca in 2017

French Minister for Armed Forces Florence Parly was in Cyprus on Monday and was briefed by her Cypriot counterpart Christoforos Fokaides on France’s oil giant Total and its drilling in Cyprus’ exclusive economic zone (EEZ).

At the same time, after a six-hour marathon session of Turkey’s Security Council, chaired by Turkish President Tayyip Erdogan, a statement said that they had evaluated the failed Conference on Cyprus in Switzerland, stressing Ankara’s determination to “maintain the interests and rights of Turkey and the ‘TRNC’ in light of our rights surrounding hydrocarbons in the East Mediterranean.”

Fokaides met Parly at the Zenon crisis management centre in Larnaca, ahead of her visit to the French Navy frigate Languedoc, which is currently operating in the Eastern Mediterranean.

Fokaides said he briefed Parly on the course of action surrounding France’s oil giant Total and its drilling in Cyprus’ EEZ.

“We are working in cooperation with the companies which have been licensed, with the interested countries on the basis of international rights, away from any potential tensions and rhetoric, with the steady goal of completing energy plans, as scheduled,” said Fokaides.

The meeting also marks the third meeting on a defence-ministry level between the two countries in the past four months, Fokaides said.

The two also discussed the strengthening of European defence, the fight against terrorism on the Iraq-Syria battlefield and the situation in the Eastern Mediterranean.  Parly will continue her trip to Jordan.

The government said on Monday that the republic’s natural gas exploration was going as planned with results expected in the autumn.

“What I can tell you with certainty is that everything is going as planned,” government spokesman Nicos Christodoulides told state radio.

Energy giant Total is drilling in block 11 of the island’s EEZ, amid threats from Turkey, which has dispatched at least one warship to monitor the situation.

Christodoulides said the proper authorities are monitoring the situation on a daily basis and that when a statement needs to be made it will be made.

“There is nothing causing concern or affecting our energy planning,” he said.

The seismic survey ship, Barbaros, which is frequently dispatched by Turkey when the republic is conducting explorations, was sailing some 39 nautical miles off the Paphos coast on Monday but far from the West Capella, the drillship working for Total in block 11.

Christodoulides said that what matters is the unconstrued implementation of the island’s energy plans “and, I repeat, this is done with no problem whatsoever.”

Last week, Ankara announced it had dispatched a frigate to monitor a drillship conducting offshore gas exploration south of the island.

The Turkish armed forces general staff said on its website that it ordered the frigate TCG Gokceada to track the West Capella drillship that arrived in Cyprus’ EEZ in the early hours of Wednesday.

“The (frigate) is fulfilling its duty in the eastern Mediterranean monitoring the West Capella… which, it is assessed, may carry out drilling activities,” the military said.

On Thursday, Turkey’s foreign minister said it would take measures against Greek Cypriot exploration for oil or gas around Cyprus. He added that Turkish Cypriots had rights over those reserves.

Commenting on the provocations from the Turkish side over drilling in Cyprus’ exclusive economic zone in an interview on Sunday, President Nicos Anastasiades said the government had taken a number of preventive legal measures.

Asked to comment on the possibility of gas pipeline linking Turkey with Israel which would have to go through the island’s EEZ, Anastasiades said that although Cyprus could not veto this, there were other ways that would ensure the government’s permission would be needed for it to go ahead such as rights relating to the environment or future plans of the Republic.

Running to set an example