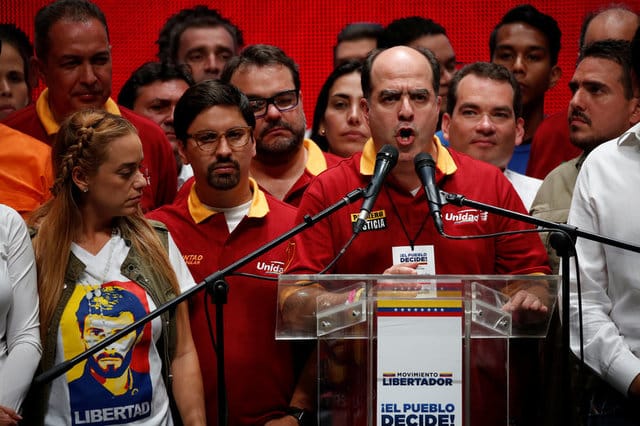 Julio Borges (C), president of the National Assembly and deputy of the Venezuelan coalition of opposition parties (MUD) addresses the media after an unofficial plebiscite against President Nicolas Maduro's government and his plan to rewrite the constitution, in Caracas, Venezuela July 16, 2017

Energised by a massive vote against President Nicolas Maduro in an unofficial plebiscite, Venezuela‘s opposition mulled on Monday how to escalate protests and block a new congress it fears may enshrine Socialist Party hegemony.

After months of street rallies that have led to nearly 100 deaths, the Democratic Unity coalition brought millions onto the streets on Sunday for an informal referendum intended to de-legitimise a leader they call a dictator.

Now, opposition leaders are promising “zero hour” in Venezuela to demand a general election and stop the leftist Maduro’s plan to create a controversial new legislative super-body called a Constituent Assembly in a July 30 vote.

Opposition tactics could include lengthy road blockades and sit-ins, a national strike, or possibly even a march on the Miraflores presidential palace, similar to events before a short-lived coup against Maduro’s successor Hugo Chavez in 2002.

“Today, Venezuela stood up with dignity to say freedom does not go backwards, democracy is not negotiated,” Julio Borges, who leads the opposition-controlled legislature, said shortly after midnight when the referendum results were announced.

Maduro, whose term is due to end in early 2019, dismissed Sunday’s opposition event as an internal exercise by the opposition with no bearing on his government.

“Don’t go crazy, calm down,” he said on Sunday in a message to the opposition, vowing his Constituent Assembly would bring peace to the volatile nation of 30 million people.

Maduro, 54, a former bus driver and long-serving foreign minister for Chavez, narrowly won election in 2013 but has seen his ratings plunge, to just over 20 per cent, during a brutal economic crisis in the South American OPEC member.

Though polls show the opposition has majority support and his foes repeatedly call for a free and fair election as their No. 1 demand, Maduro insists they are US pawns intent on sabotaging the economy and bringing him down through violence.

Most Venezuelans oppose the Constituent Assembly, which will have power to rewrite the constitution and annul the current opposition-led legislature, but Maduro is pressing on anyway for the vote in two weeks’ time.

In three questions at Sunday’s event, opposition supporters voted overwhelmingly – by 98 per cent – to reject the proposed new assembly, urge the military to defend the existing constitution, and support elections before Maduro’s term ends, according to academics monitoring the vote for the opposition.

Sunday’s nearly 7.2 million participation compared with 7.7 million opposition votes in the 2015 legislative elections that it won by a landslide and 7.3 million votes for the opposition in a 2013 presidential poll narrowly won by Maduro.

“The result is a remarkable show of force for Venezuela‘s opposition,” New York-based Torino Capital said in a research note, noting the vote was only called two weeks previously and participation meant openly defying the government.

“We can assume that the number of people voting was less than that which would turn out to vote in a regular election .. The results seem to confirm that the opposition would easily defeat the government in any election.”

The political turmoil has taken a heavy toll on Venezuela: 95 deaths in unrest since April, thousands of injuries, hundreds of arrests, and further damage to an economy already in its fourth year of decline.

Federer offers no guarantees he will be back at Wimbledon

China halts high-level military dialogue with US., suspends other cooperation