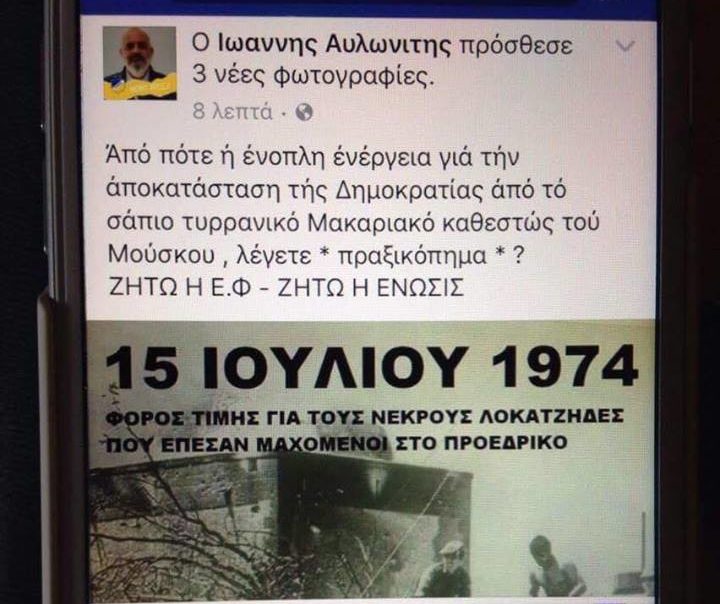 A civil defence officer is facing a disciplinary inquiry after he uploaded a post on his Facebook page praising the July 1974 coup against president Makarios.

The post, which was later removed, contained photos of National Guard commandos, one at the bombed presidential palace the day of the coup, July 15, 1974, accompanied with the slogan: “Honour to the fallen commandos who died in the fight for the presidential palace.”

Around 20 commandos died during the attack against the presidential palace in a bid to overthrow Makarios.

The photo had been uploaded on the Facebook page of Ioannis Avlonitis, who is the civil defence director in Nicosia.

The post also said “Since when does armed action to restore democracy from the rotten, tyrannical Makarios regime … is called a coup. Long live the National Guard, long live Enosis (union with Greece).”

It was heavily criticized by other social media users who questioned whether the man was fit for the post.

More so after it transpired that it was the same man who starred in a video around eight years ago in which a little boy with a toy gun was prompted to say he was going to shoot Turks and communists.

The Cyprus Mail has learned that Avlonitis was now facing a disciplinary investigation irrespective of him removing the post on the same day.

Avlonitis had been prosecuted for the offending video in 2010 but was acquitted by a court some three years later.

He had been charged with making available racist material that promotes violence through Facebook.

Dubbed the “fascist grandpa” Avlonitis got off because it was not proven that he was linked to the video.

The court also said the contents of the video only caused sadness and did not promote racial discrimination to justify criminalizing it as an act of racial and xenophobic nature.

No rational person could be incited to feel hate or to carry out a violent act against a specific race or political ideology by watching an innocent child utter words whose meaning he didn’t know, the court said.

The short video features a boy of around four, brandishing a replica pistol.

In it the boy is asked: “What are we?

“Fascists,” the boy replies. “Who are you going to shoot?”

A poster symbolising the military dictatorship that ruled Greece between 1967 and 1974 is visible on a wall in the background.